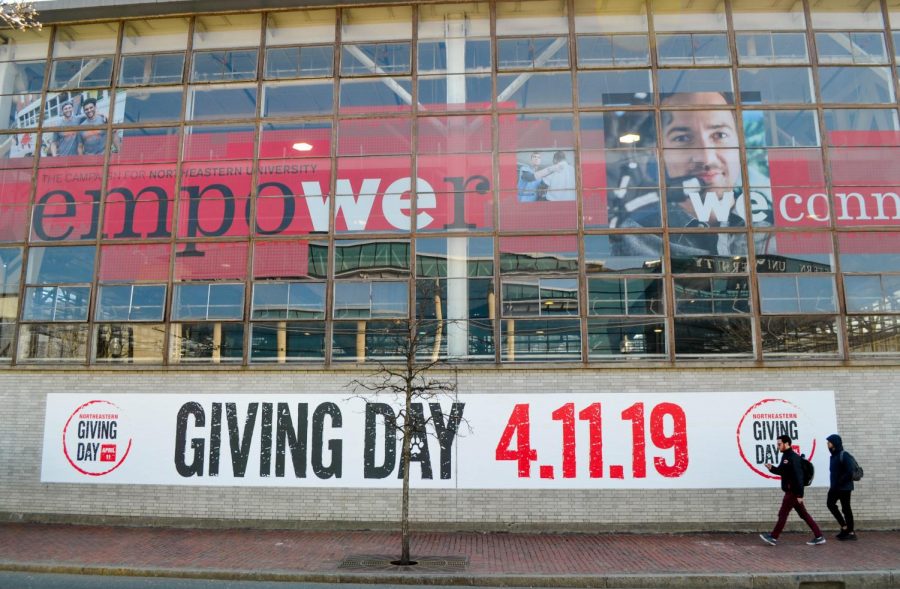 Giving Day is advertised as a day-long philanthropic initiative in which the Northeastern community is asked to "support" the university through donations.

The banners appeared one day all across campus. Next were the flyers and emails, followed by painted pavement and stickers on campus benches. The most glaring reminder was fastened to the side of a building overlooking Huntington Avenue, announcing to all who passed by that Northeastern’s Giving Day was approaching.

Initially, I was thrilled. I thought it was great that my university was hosting an entire event to raise money for charity, and dedicating so many resources to raise awareness about the event. I was excited at the prospect, envisioning something similar to my high school’s Service Day, in which students took a day off from classes to volunteer within the community. Little did I know that Giving Day has nothing to do with philanthropy. Rather than donating money to others, Northeastern expects its alumni, parents and even current students to donate to the university.

The discourse on Giving Day intensified this year with the circulation of fake posters with satirical sales pitches, complete with a spoof website. Phrases like, “you pay for Aoun’s 25 private jets, why not make it an even 30?” may sound ridiculous, but like all good satire, they hint at a deeper truth: Northeastern is pouring time, energy and resources into securing revenue the university doesn’t seem to need.

When I arrived on campus as a freshman, I found myself surprised and disappointed in the careless and excessive ways Northeastern allocates money. In 2011, President Joseph E. Aoun received $3.1 million from the university, a salary that was second only to Robert Zimmer, the president of the University of Chicago. Projects like the $225 million ISEC building were seemingly developed out of an effort to raise Northeastern’s prestige more than anything else. Meanwhile, resources that are more central to the daily life of students, such as Snell Library and the health center, remain overcrowded and underfunded.

University Health and Counseling Services needs two more counselors on staff to receive accreditation from the International Association of Counseling Services, and Northeastern’s failure to provide students with adequate mental health care has been a prevalent issue for years. Nonetheless, student-led campaigns to fund and accredit UHCS have been largely unsuccessful and the center maintains a 1.3-star rating on Google.

Funding is one of the most explicit ways a university can declare its priorities, and Giving Day is no exception. There are two separate tabs on the official Giving Day website that allow users to donate to athletic programs. Meanwhile, projects that would undoubtedly improve student life, such as funding and accrediting UHCS, are nowhere to be found on the Giving Day agenda.

Additionally, Northeastern students acquire some of the highest student debt in Boston, owing an average of $28,501 by the time they graduate, according to data gathered by ProPublica. That surpasses the average debt graduates owe at Boston University, Boston College, Emerson College, Harvard University, Massachusetts Institute of Technology and Tufts University. Northeastern’s average spending on instruction per student is $15,593. By comparison, Boston University spends $26,542 per student, Boston College spends $20,571 and Tufts spends $21,543.

To make matters worse, Giving Day isn’t only marketed towards alumni. Requests for money are also directed at Northeastern parents, many of whom are already paying tens of thousands of dollars in tuition each year. Additionally, the Giving Day website directs its calls for donations towards faculty members and current Northeastern students.

College tuition is a huge financial burden for most students and their families, and the cost of attending Northeastern increases every year. Northeastern’s comparatively small endowment could mean that it can’t offer lower-income students the same amount of financial support as schools like Harvard, MIT or BU. Therefore, these students are saddled with student loans that can take years or even decades to pay off.

It is normal for universities to ask alumni to donate money. It’s also understandable that Northeastern wants to grow its endowment, but the tactics the university is employing to achieve that goal are misguided and insensitive. It is unreasonable to target parents of current students and ask them to give more money on top of the exorbitant amount they already pay. It borders on insulting to ask students, who are committing themselves to decades worth of debt, to do the same. This is not a gift. It’s a tax, and students should not be expected to pay it.