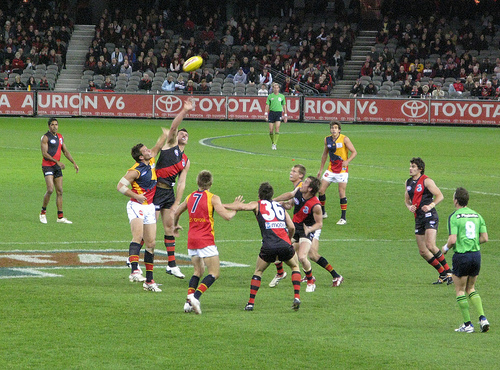 Players jostle for a loose ball in a 2008 game of Australian rules football.

One of the premier sporting cities in the entire world, Boston boasts all walks of sporting life. Due to an abundance of Irish heritage, sports like hurling and Gaelic football are televised in various bars, pubs and households around the city.

However, there is still an anomaly in the history of sportscasting within Massachusetts and the United States: a rather unusual love for the sport of Australian rules football in the 1980s which is still seen today.

The first evidence of the inception of ‘Aussie’ rules football dates back to 1858 as a way to keep cricket players in shape during the winter seasons when they were not competing.

How did this sport created more than 150 years ago make its way over to the United States?

Aussie rules football, also known as ‘Footy,’ started to gain traction in the United States after ESPN began to broadcast obscure sports such as hurling, darts, table tennis and model boat races. Travis Vogan, the author of “ESPN: The Making of the Sports Media Empire,” said ESPN paid close to $105,000 for the rights to televise tapings of the Aussie rules games the day after they were played.

“The rights to watch these kinds of sports did not cost much at all,” said Vogan, an associate professor at the University of Iowa. “The fledgling ESPN at the time wanted to portray the ‘Wide World of Sports’ promise to provide a constant variety of sports.”

In the late 1980s when games were televised, the majority of Boston bars, particularly in South Boston, created hotspots for nightly viewings. These hotspots can still be seen today. This came as the result of the uncanny resemblance between Gaelic and Australian football and the niche of people of Irish descent who saw these viewings as a social event.

“The game makes little to no sense to me,” O’Connell said. “But last year when they put the final on TV here at the pub it was one of the busiest nights I had ever seen at this place.”

Variations of football link Australia and Ireland’s sports culture. This was solidified as early as 1967 during the Australian Football World Tour. The tour was set up by Harry Beitzel and James Harkin to expand the awareness of the then-booming Australian version of the game.

In 1984, the Gaelic Athletic Association, or GAA, and the Australian Football League, or AFL, created the International Rules Series played between Ireland and Australia. The event became annual in 1998 and continues to this day.

“I remember those games, Australians are tough,” said Dorchester resident and second-generation Irish-American Alan Wilkes. “I don’t know how word got out about those matches, but the bars around here were always packed.”

Across the United States, when tapings of footy games were televised back in the early 80s, they tended to air late on Friday and Saturday nights. Given the exposure that ESPN provided during the decade they broadcasted the sport, the first governing bodies in the United States for Australian Rules Football were created.

Australia started to recognize a potential talent pool in the United State in 2002, and began having invitation-only tryouts with college athletes — this endeavor had little to no success. Despite this result, there are two Americans who have proved doubters wrong and have changed the status quo for American prospects: Jason Holmes and Mason Cox.

Holmes, who played Division I basketball for Mississippi Valley State and Morehead State, made the transfer to the St. Kilda Saints in 2014 and played three seasons until he was cut from the St Kilda squad in 2017.

Cox, who also played Division I basketball at Oklahoma State University, is the starting ruckman for the Collingwood Magpies. He played a major role in last season’s Grand Final, where he played in front of 100,022 fans at the Melbourne Cricket Ground, kicking two goals.