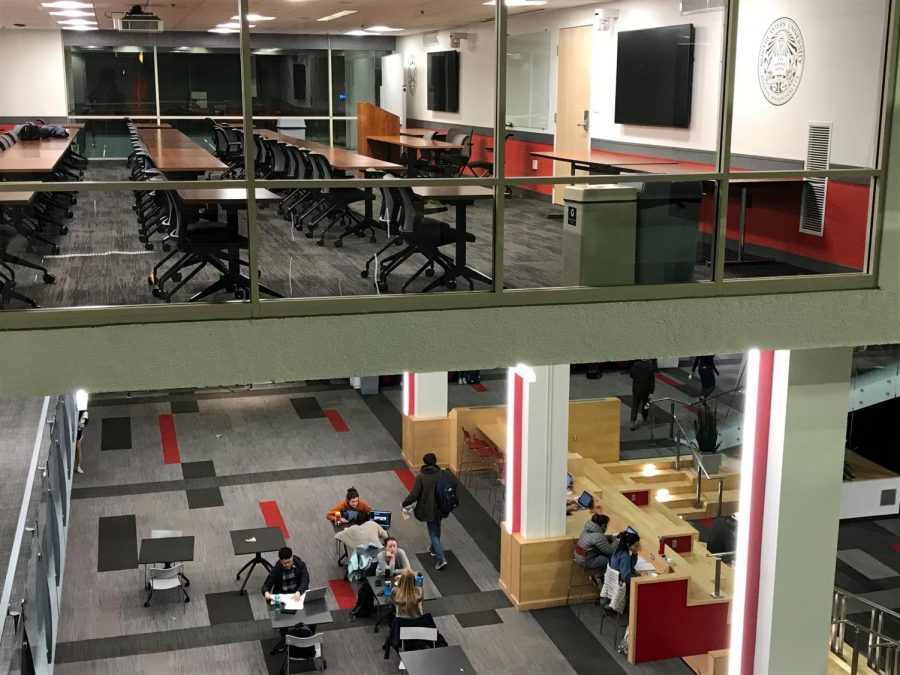 The Student Government Association Senate unanimously passed an internal budget proposal to stop funding stipends for its executive staff through the Student Activity Fee and decrease its overall budget by 48 percent.

The legislation, introduced at Monday night’s SGA Senate meeting, would cut the organization’s total internal budget from $56,991.61 to $29,591.61 if approved by the SGA Finance Board. The Board allocates funding to clubs from a pool of more than $2 million generated from each student’s $136 Activity Fee payment. Under the new plan, SGA would instead finance its stipends with its own fundraising efforts.

SGA President Dylan Balcom said that when the referendum proposals came in for this round of elections, he knew it was time to reconsider stipend funding. For the second year in a row, students submitted a ballot question asking to eliminate SGA stipends. This year, the move is framed by broader student disappointment over SGA’s wide-reaching cuts to club funding. Balcom said he hopes the new budget will at least partially alleviate clubs’ financial problems next year.

“After hearing these concerns, I really realized it doesn’t feel right to have the stipends come directly from the [Activity Fee],” said Balcom, a third-year behavioral neuroscience major. “While it’s allowed, it doesn’t mean it’s what we should be doing.”

David Nica, president of the Northeastern University College Republicans and a fourth-year economics major, led efforts to try to get the “End SGA Stipends” referendum on the ballot this year. He said he appreciates the proposed budget changes but hopes SGA will continue to consider internal cuts, particularly in the area of SGA’s $5,750 senate retreat.

“They should do what they’re planning to do with the stipend funding and get [the retreat] charged to the cash account,” he said. “I think that would be a positive step.”

The funding change doesn’t necessarily mean, however, that SGA will stop giving stipends to its executive board. The organization can raise money for underfunded line items such as stipends by volunteering, Balcom said. SGA members, for example, can help deliver micro-fridges on move-in day to earn university credit toward the SGA cash account. This year’s cabinet, anticipating the funding change, has saved up enough money volunteering to provide next year’s executive board with stipends, as long as the incoming senate approves it.

Chris Brown, a second-year mathematics and finance combined major who is running unopposed for next year’s SGA presidency, said he and his running mate, Gabby Nobile, fully support the cut in Activity Fee stipend funding but recognize the importance of stipends for low-income members of SGA.

“We’re considering a bunch of different things — cash account is one of them, because that is written into our constitution,” Brown said. “One other thing that we could do is go to the administration and try to reinstate scholarships [for SGA staff], just to ease the burden on students who are really struggling with finances. We’re really looking for any way to help our students serve as leaders.”

Victoire Cointy, SGA’s executive director of communications and a fourth-year communication studies major, said it is important that SGA continues to provide stipends because they keep the organization accessible.

“We know that there are students who are in financial situations where they need that amount of money every week to be able to take on the position, because it is a time commitment,” she said.

Balcom said that personally, before he received a stipend, he supported himself by working part-time at Pavement Coffeehouse. As he took on more responsibility in SGA, this became impossible to continue. He said for a few months this year, he was working for SGA almost 60 hours a week.

“No one’s going into it [with] like, greedy hands, ‘I’m going to be making big money,’” he said. “It allows me to be able to, when I have six hours of meetings, [run] and grab lunch in between.”

Cointy added that for international students like herself, work outside the university is hard to find in the United States without additional paperwork. Stipends offer these students a unique chance to get involved on campus without having to worry about finding outside income.

This semester, two of SGA’s nine cabinet members are international students. Balcom said he expects this proportion to increase as large numbers of international SGA senators move up the ranks.

The SGA has flip-flopped on the question of stipends since they were first approved in 2006. As Balcom prepares to leave office, he said, he is comforted by the fact that his administration will have had a positive impact in that debate.

“I think it’s a potential solution to a problem that a lot of people have been talking about,” he said. “So, I’m happy that I think we’ve found one.”