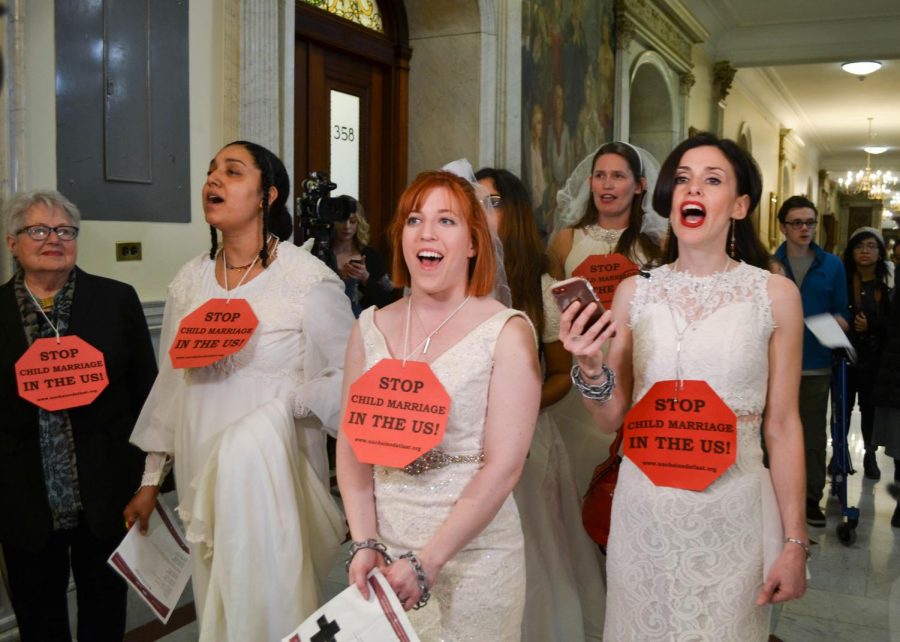 When she was in high school, Tammy Monteiro was picking out her wedding dress instead of her prom dress. At 16, Monteiro was legally married to a 25-year-old man at a New Bedford courthouse.

“In one day we walked into that courthouse and in one day he walked out with complete custody of me and permission to make me his bride,” said Monteiro, who is now 36. “He told me that I was God’s chosen people, that I was chosen and that God had somehow sent me to him to be his bride.”

The marriage, which Monteiro described as abusive, has lasted for more than 20 years. Monteiro has only separated from her husband in the last five years. Although she does not live with him anymore, she is still legally married to and has eight sons with her husband.

Monteiro joined the nonprofit organization Unchained at Last and a dozen other protesters at the State House on March 27 to push for legislation that would put an end to child marriage in Massachusetts. Donning bridal gowns, veils and chains around their wrists, the group marched to Gov. Charlie Baker’s office, chanting and singing loudly to make sure their voices were heard throughout the building.

“A girl who marries before 18 suffers devastating repercussions in terms of her health, her education, her economic opportunities, and has a significantly increased risk of being beaten by her spouse,” said Fraidy Reiss, the founder and executive director of Unchained at Last to the crowd. “There are real lives that are being impacted by child marriage.”

According to UNICEF, child marriage is any marriage that occurs before the age of 18, which still happens at alarming rates across the globe. Even if the marriage is considered legal, it is still deemed a violation of a child’s basic human rights.

Girls Not Brides, a global group of organizations working to end child marriage worldwide, estimates that nearly 12 million girls are married before the age of 18 each year. The Tahirih Justice Center, a nonprofit devoted to amending child marriage laws in the United States, found that between the years 2000 and 2015, 200,000 children married under the age of 18 were from the United States. Unchained at Last also found that 1,231 of those children, as young as 14, were married in Massachusetts.

Marriage under the age of 18 is illegal in only two states — New Jersey and Delaware. Many other states cap the age for parental consent at 15 or 16. Massachusetts has no floor age for parental consent, thus making child marriage completely legal. There is only one case law from 1854 that set the limit at 14 for boys and 12 for girls.

“We need some updating here,” said Reiss, who identifies as a survivor of a forced marriage. “What we’re asking is to just eliminate that loophole. Don’t raise the marriage age, keep it at 18, but eliminate the dangerous loophole under which children are entered into a marriage by a parent and a judge and they’re completely disempowered.”

A bill was proposed at the beginning of last year by former Senate President Harriette Chandler of Worcester to ban all child marriage in Massachusetts, but it did not pass. Chandler and Rep. Kay Khan of Newton plan to reintroduce two bills with the hope that it will pass this time around.

Once entered into the marriage, children have no legal way out, for they cannot file for divorce until they are legally an adult — the same goes for checking into a domestic violence shelter.

They cannot seek help from the Massachusetts Department of Children and Families either since they only provide aid to children being abused by parents, not spouses.

“As a child, you just don’t have the rights that you need to safely navigate a contract as serious as marriage,” Reiss said. “States across the U.S. make children wait until 18 to do all kinds of things and to enter into almost every other contract. Why aren’t we asking them to wait to enter into this very serious contract?”

In addition to trying to get legislation passed, Unchained at Last also works to raise awareness that this is an issue happening right here in the United States. Monteiro highlighted the fact that this issue is not widely covered because many victims are afraid to speak out.

“A lot of them are obviously afraid to speak out, but a lot of them are not aware of the level of abuse that they’re suffering,” Monteiro said. “They think, ‘Well, you know, I’m not being physically abused. I’m not being punched around, so it’s okay.’ They don’t realize that actually, emotional abuse can sometimes be more detrimental than physical abuse.”

Monteiro is in the process of rebuilding her life and said her spirits are high as she explores new passions that she did not get the opportunity to focus on while she was married.

Nesha Abiraj, the advocacy director of Human Rights Watch’s women’s rights division, spoke at the protest as well. Her grandmothers were both married as children in the 1930s and she said victims of forced and child marriage are not alone.

“No one gets left behind,” Varia said. “I have seen poverty up close. When we think of poverty we think of a serious shortage of financial resources, but today, there is a poverty of compassion, poverty of empathy, poverty of understanding, and most of all poverty of the courage to stand for what is right even if it does not affect us personally. Now is the time for Massachusetts lawmakers to act, pass this bill before another child is put at risk.”

Correction: This article previously listed Nisha Varia as a speaker at the State House. It was actually Nesha Abiraj, another fellow with HRW’s Women’s Rights Division.