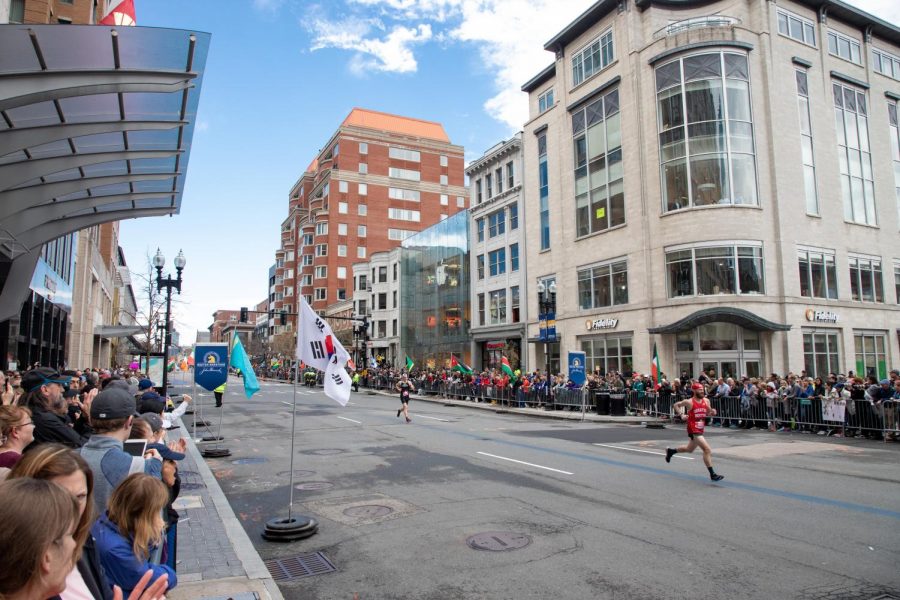 Thousands showed up to cheer on Boston Marathon runners on Monday.

When Marathon Monday began, it looked like it was going to be a cloudy, rainy race, but as runners took off, the skies cleared and the weather completely turned around. While most enjoyed not running through soaking wet streets, some would have preferred it to the sticky conditions they got.

“I wish it rained the whole time,” said Danielle Voke, a fifth-year behavioral neuroscience major. “The middle miles were so hot and humid, and I’m a cold weather runner so I really struggled.”

The sudden change in weather and difficulty of the course itself had a large impact on many of the first-time runners. Boston’s course is much hillier than most other big marathons, which often slows runners more than expected.

“I trained hard and felt pretty prepared, but this course and race are so physically and emotionally taxing,” said Peter Cunningham, a 2018 Northeastern graduate. “I didn’t finish in anywhere near the time I would’ve liked and it was definitely the hardest thing I’ve done.”

He completed the race in 4:11:04, about an hour slower than his qualifying goal of three hours. Voke finished her race in 4:09:01, also an hour shy of qualifying, but she plans to run another marathon in September to beat her PR and qualify for next year’s Boston race.

Drew McGlynn, a third-year chemical engineering major and member of Northeastern Club Running, qualified for this year. He finished in 3:08:39, not a qualifying time for next year’s race. Although he did not hit his target time, McGlynn said the experience of running the Boston Marathon for the first time was unlike any other race he had ever been in and he is still proud of the time he achieved.

“I saw so many incredible performances out there by fellow runners, and the support from the spectators and volunteers was just staggering and unlike anything I’ve ever seen,” he said. “Running with over 30,000 people was such an incredible experience.”

While they may not have reached their running goals, Voke and Cunningham did hit the fundraising goals for their charities. Voke raised $9,000 for the Peer Health Exchange, a national nonprofit that teaches health education in Boston Public Schools, and Cunningham raised $15,415 for the American Foundation for Suicide Prevention.

All three said they hope to run the marathon again, whether it be next year or sometime in the near future. Ian Herrington, another 2018 Northeastern graduate, said he would consider it, but plans to take a break for now.

“I have a newfound appreciation for anyone that has ever completed a marathon,” he said. “I am very lucky that my first ever marathon was here in Boston, but it was very challenging and definitely harder than I expected.”

Cunningham said his race day was particularly emotional given his reasons for running. His experience allowed him to fully comprehend why this is one of the most prestigious races in the world.

“It was so emotionally charged for me, with fundraising and running wrapped up together, and I nearly choked up thinking about my Dad while running the race,” Cunningham said. “The atmosphere was electric and I feel like I finally understand the hype around this marathon in particular and I’m so glad to have had this opportunity.”