The Huntington News • May 13, 2019 • https://huntnewsnu.com/59280/lifestyle/reviews/review-the-handmaids-tale-opera-delivers-in-victorious-adaptation/ 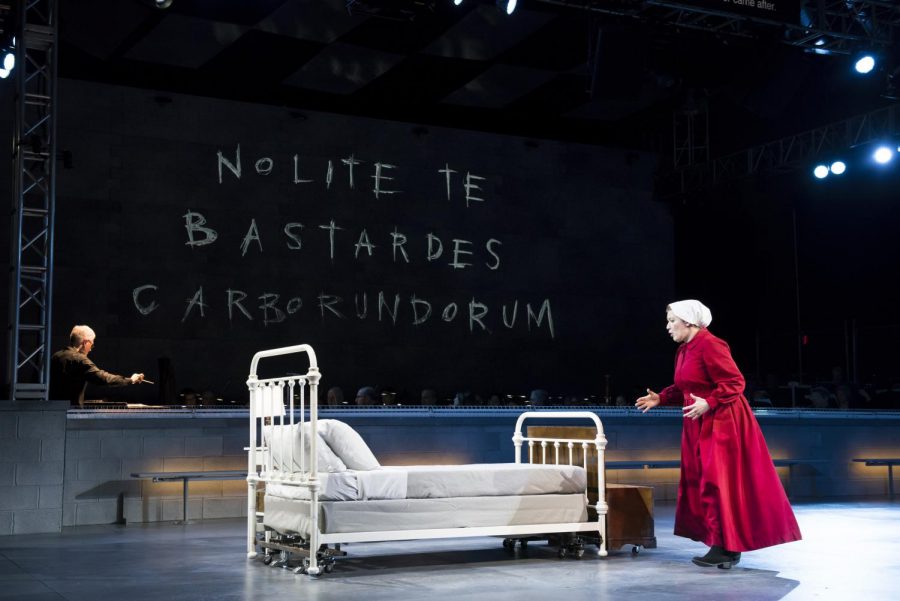 The operatic rendition of Margaret Atwood’s “The Handmaid’s Tale” religiously adheres to the original text, going as far as staging the show in a basketball gymnasium where the handmaids in the novel slept.

It is this meticulous narrative strategy that makes the opera a truly triumphant adaptation of the iconic feminist bestseller.

Written and composed by Poul Ruders and librettist Paul Bentley and performed by the Boston Lyric Opera at the Lavietes Pavilion, “The Handmaid’s Tale” envisions a dystopian future governed by fundamentalist Christian values in which fertile women, or “handmaids,” serve as state-sanctioned vessels for involuntary pregnancies.

Led by conductor David Angus, the orchestra is immaculately in sync with the singers, creating a theatrical environment fit for an adaption of a dystopian novel.

During the opera’s three-hour run, the audience becomes a reluctant witness to on-stage sexual assault, hangings and a birth scene reminiscent of a ritualistic sacrament. While many attendees are likely to have read the novel, its warning against absolutist theocracies becomes more jarring and relevant through the adaptation.

Despite these remarkable performances, some of the scenes are admittedly hard to distinguish between a peripatetic fever dream and cognitive dissonance; split-stage narratives and overlapping choruses may detract from the audience’s complete attention. However, these scenes cultivate an environment of religious creed inspired by the Salem witch trials.

In this way, the audience is almost conditioned to cherish every moment of silence or singular sound. When Offred hallucinates her lost daughter, the child’s lingering footsteps resonate throughout the gymnasium and embed themselves into the audience’s auditory memory, demonstrating the significance of the mother’s suffering.

Even though the female characters are brutally and relentlessly tortured, the production makes clear that their voices come first. All male performances are stoic and almost insipid, drab among the crimson garb of the handmaids.

In creating these contrasts, the opera, which was written by two men, honors the integrity of the novel. The adaptation is successfully able to carry on the subversion of gender narratives and female empowerment in an art form traditionally dominated by men.

This is what makes “The Handmaid’s Tale” a victory in musical adaptation.

When Offred encounters her friend and former defector Moira at a government-run brothel — a hypocritical underbelly of the theocratic regime — Moira can only tell the handmaid: “Don’t let the bastards grind you down.”

This English translation of the novel’s mantra, “nolite te bastardes carborundorum,” is much more than “schoolboy Latin.” Through its meticulous acting, sound design, visuals and interpretation, the operatic adaptation builds upon the various purposes of the aphorism and the novel itself: it is an unsparing warning for modern politics and, at the same time, a cautious message of hope.

“The Handmaid’s Tale” performed at Lavietes Pavilion until May 12.