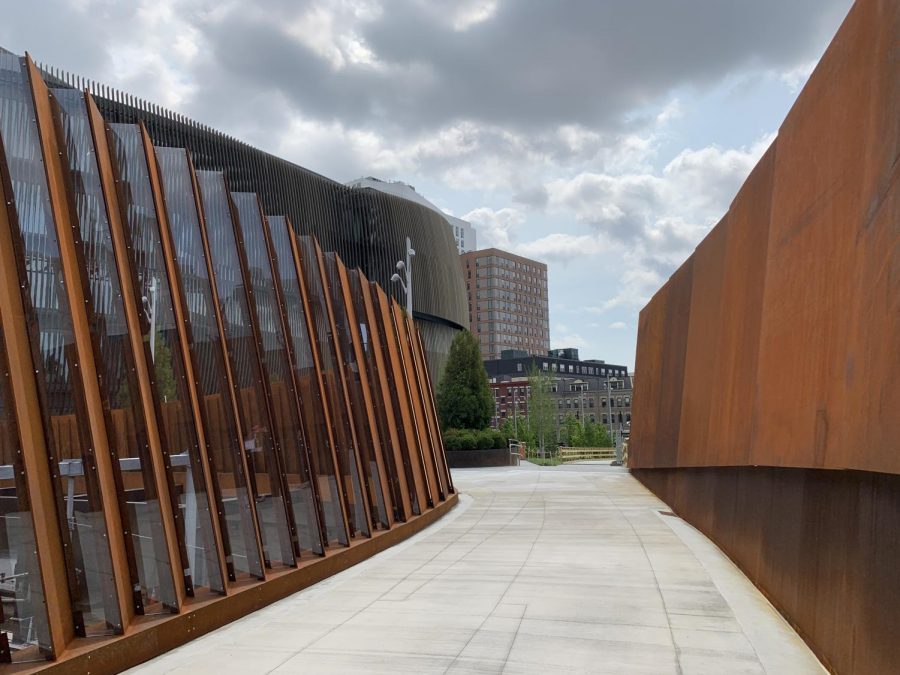 The bridge connecting the north and south sides of campus has finally opened, to mixed opinions.

It was a warm spring day, and Northeastern students had a reason to rejoice — the new footbridge connecting the north and south sides of campus was finally complete. After years of construction and a viewing party in October, the bridge opened to the public Friday.

The bridge, a rusty orange color, has entrances next to Snell Library and the Interdisciplinary Science and Engineering Complex, or ISEC. It also includes a pathway directly into ISEC and is handicap-accessible, with an elevator available to bypass Snell’s staircases.

Prior to the bridge, students had two main options to travel from the center of campus to the Columbus Avenue side, neither direct routes to ISEC: walking through Columbus Garage or walking through Ruggles Station. Now, instead of views of cars and hurried MBTA riders, students walking from Snell to ISEC can look out over train tracks with a view of the skyscrapers of Back Bay in the distance.

Although much fanfare came with the construction of the bridge, members of the Northeastern community have mixed opinions about the finished product. While many agreed that the bridge is useful, they disagreed on the bridge’s appearance.

Second-year computer science major Nikhal Akenapalli said he likes the bridge because of its convenience. “It kind of cuts the time to get to my classes in half. This area was inaccessible before, so it’s nice that there’s a direct path now.”

Gregory Zuch, an advisor in the College of Arts, Media and Design, said he likes the look of the bridge and thinks it will be useful for him. “I think it’s wonderful. It serves a purpose and looks good at the same time,” Zuch said.

Shannon Foley, a second-year data science and business administration combined major, said she is surprised by how much she likes the bridge. “I was skeptical because I thought it was a questionable color choice and maybe an unnecessary way to spend money, but it’s kind of charming,” Foley said. “I think it’s convenient and complements the campus. It’s nice for those of us living on Columbus.”

The weathered appearance of the bridge is a controversial point for many students. Jaron Hylton, a first-year cybersecurity major, said he dislikes the look.

“It’s weirdly rusty. It’s also weird that it doesn’t have any spillage points on the sides so it looks like it’ll fill up with water,” Hylton said.

Keshav Sharma, a third-year politics, philosophy and economics major, said he loves the bridge. “People hate on the rust thing, but I love it. I think it looks great. We’ll have ISEC II on the other side and the color of the pavement and the rust looks pretty neat.”

Randi Katz, an administrator in the College of Engineering, said she thinks there is more to the bridge than the color. “I think it’s so cool. I mean, it looks rusty, but let’s get over the fact that the color is this color! Everyone’s tuition went to it, but I’m all for it.”

Third-year physical therapy major Rachel Biega said she doesn’t mind the color but thinks it doesn’t look right on campus. “I think it doesn’t really fit with the older look of Snell. It definitely stands out.”

First-year physics major Cara Pesciotta also said she thinks the color was a confusing choice  compared to the buildings on campus. “I don’t think it fits with the rest of the school.”

The bridge has see-through slants on one side and smooth, flat panels on the other.

Pesciotta and van de Ven pointed out that the bridge bounces when a significant amount of people walk on it. “The bouncing is weird and makes me fear for a few years down the line,” van de Ven said with a laugh.

When asked her opinion on the look of the bridge, Duboff said she has no idea. “I’m color blind, so it’s just a bridge to me,” Duboff said.