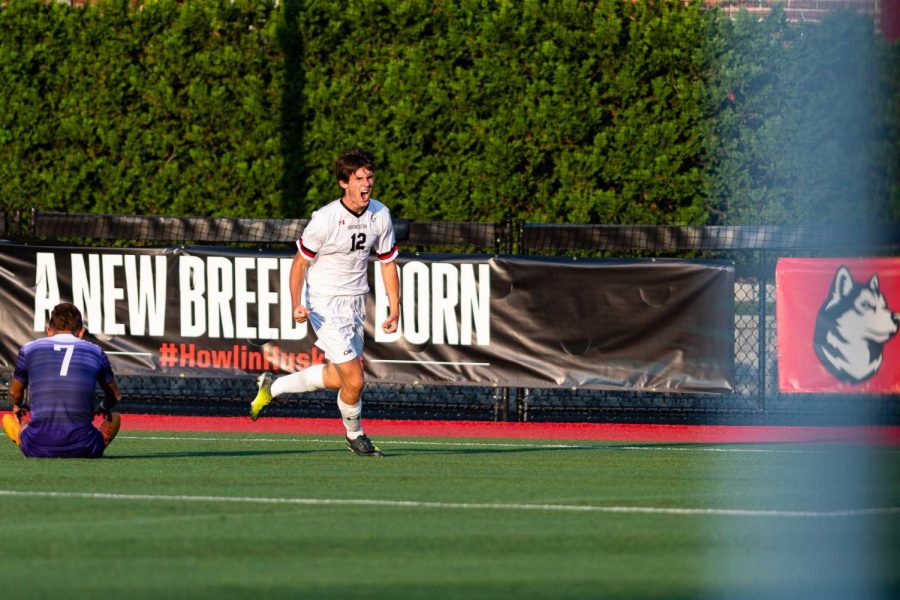 Sophomore Ryan Massoud celebrates after scoring during a game against Niagara last season.

The Huskies escaped Cushing Field with a 2-1 win over the UMass Lowell River Hawks, who struggled to finish despite possessing the ball for most of the game.

The River Hawks (1-2-1), 21-2-4 at home since 2016 coming into the game, had more scoring chances and shots than the visiting Huskies (2-2), but were unable to cash in on their most dangerous opportunities. They outshot the Huskies 18-5 in the game but just three of those shots were on net.

The Huskies found the back of the net on two out of their three shots on goal, including their first of the game, but spent the majority of the game defending.

For much of the first half, the River Hawks appeared to be the more settled team, as they controlled the ball through the majority of the first 20 minutes of play. They sat back, reset their offense and hoped for the Huskies to make a mistake.

The River Hawks looked poised to score 12 minutes into the game as Alejandro Osorio, Lowell’s senior forward, passed it to a wide open Roko Prsa right in front of the net, but the senior midfielder shot the ball right into the hands of Northeastern’s junior goalie Noah Abrams, defusing the opportunity.

The Huskies made aggressive passes throughout the first half, frequently launching the ball deep into River Hawk territory and letting their speedy midfielders win footraces downfield. This was a drastically different style of play than Lowell, who sought to generate chances with lots of short passes and frequent resets.

Eventually, Northeastern’s aggression prevailed, as Benjamin Klingen pushed a ball through traffic right in front of the net, where it was subsequently deflected off a defender and right to Ryan Massoud. The sophomore midfielder and reigning CAA All-Rookie team member launched the ball past sophomore goalie Patrick Gujic 22 minutes into the game, giving the Huskies a 1-0 lead that they would carry into halftime.

The goal was Massoud’s first of the season. Klingen picked up his first collegiate assist in his first season for the Huskies since coming over from German professional soccer.

While the momentum certainly seemed to shift in the Huskies’ favor, the River Hawks continued to control the ball in the second half, but had no finish to their game. Whether it was one too many passes or a shot sent wide of the net, the River Hawks could not find a way to capitalize on any opportunity they created.

That finally changed for the home team roughly 10 minutes into the second half. Sophomore defender German Fuentes sent a beautiful twisting shot from well outside of the box off the far post. The ball bounced past Abrams, giving Fuentes his first Division I goal and tying the game.

Both teams played a much more physical game in the second half as the River Hawks worked to keep the ball closer to Northeastern’s net. The NU defenders had a lot of work to do, but managed to prevent Lowell from challenging Abrams in net.

The second half also brought with it many more whistles, the first arriving in less than a minute, with three yellow cards handed to Lowell and one given to the Huskies. One of those yellow cards wound up deciding the game, as it granted the Huskies a free kick with just under 20 minutes to play.

German-born Klingen made his way onto the box score again as the last Husky to touch the ball on a spectacular free kick from freshman defender Bernardo Gracindo. The deflection just grazed Gujic’s hands and found the back of the net to give the Huskies the lead that they’d take to the final whistle.

Lowell wasn’t without their chances to tie the game up, misfiring on back to back corners with 13 minutes remaining and failing to connect on two free kicks just in front of the box with 11 and nine minutes left, respectively.

The River Hawks fell to 1-2-1 on the season, while the Huskies improved to 2-2. Northeastern will now look forward to a CAA matchup against the Delaware Blue Hens (1-1-1) back home at Parsons Field Saturday evening.