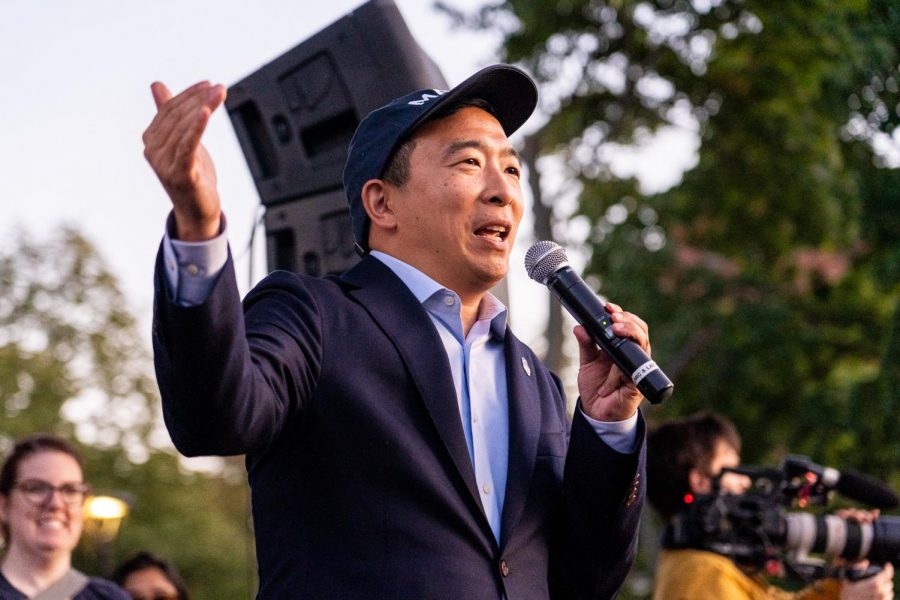 Andrew Yang took the stage at Cambridge Common Monday night, speaking to hundreds of supporters on signature topics for the Democratic presidential candidate such as his lack of a political background, his interest in math and a promise of a universal basic income to each American.

For about 40 minutes, he spoke to a crowd of mostly college students and young professionals about “trickle-up economics” and what he termed a state of “mass confusion” brought about by President Donald J. Trump’s election in 2016.

“We need a revolution of reason, a revolution of facts,” said Yang, a 44-year-old Brown University graduate whose resume spans from attorney-at-law to internet entrepreneur to, now, candidate for public office.

Throughout the night, Yang branded himself as foreign to the political system.

“When Trump was elected, my first move was not to run for president, because I’m not crazy,” he said.

Many of Yang’s supporters who turned out said his outsider factor is a positive for them.

“The word ‘politician’ has become tainted in the last three years,” said Benjamin Pu, a 22-year-old student at Berklee College of Music. “It’s refreshing to see a non-politician running with policies in people’s best interest.”

Much of Yang’s speech and the talk of the crowd was dominated by his signature policy proposal: a “Freedom Dividend” giving each American $1,000 per month of basic income.

“It’s really important for working people, especially those that work more than 40 hours per week, to be able to live off that,” said Hannah McMurtray, a 25-year-old who works for a pharmaceutical company in Cambridge. “It doesn’t make sense in such a wealthy country for there to be that much of a disparity.”

Moving to a different part of his economic plan, Yang touched on the issue of wealth disparity. Early on, he railed against Amazon’s ability to avoid paying taxes and compared its owner, Jeff Bezos, to Scrooge McDuck.

“Who here notices stores closing in their town?” he asked. “Why are they closing? Amazon. How can you have a trillion-dollar company that doesn’t pay any taxes? That’s the math, Boston.”

Math is a calling card for Yang’s campaign, and he encouraged his supporters to hold up pre-distributed “Math” placards whenever he brought up the subject.

Not everyone in the crowd was a college student or recent graduate. Linda Lin and Samuel Wang said they attended partly because their son, a Yang fan who posted on his blog about the rally, couldn’t attend. They also said they support Yang’s universal basic income proposal.

Another reason they support Yang, Wang said, is “because he is Asian.”

“We need a new face,” Wang said. “Not all American politicians know new ideas. We want someone new.”

Many rally-goers said they supported Bernie Sanders, the independent Vermont senator and Democratic presidential candidate, in the 2016 Democratic primary and still like him now.

Andrew Moore and Jessica Gonowon, a couple who traveled to the rally from Worcester, Massachusetts, said they preferred Sanders in 2016 and “almost didn’t want to vote” in the general election after Sanders lost the nomination to Hillary Clinton.

They said ever since Gonowon showed Moore a Joe Rogan video about Yang’s universal income proposal earlier this year, they’ve been hooked. Monday was their fourth Yang event this year, the other three being “Yang Gang meetups” in Worcester.

Gonowon said she prefers Yang this time around because “compared to Bernie, Yang makes more realistic sense and I think he’d get more done.”

Yang took the stage at about 6:15 p.m. and started by invoking Democrats’ memories of election night in November 2016.

“You remember 2016,” he said. “You remember watching your TV and thinking, ‘Holy [expletive], we’re doing this thing?’”

Yang criticized the media at length for failing to explain how Trump became president — namely, a failure to “dig into the numbers” to give the truth.

“The numbers say we automated away 4 million manufacturing jobs … in swing states that lost the election,” he said. “The system is arranged to push people to the curb.”

As the speech drew near its close, he delivered a justification for his “Freedom Dividend” plan, citing its effectiveness in Alaska, a state that paid for it using money from oil drilling. Technology and data, he said, are the modern equivalent to oil.

“Do you get a check in the mail for your data?” he asked the crowd, which responded with a resounding no. “I call it the tech check.”

Yang is branded as a non-politician outsider, but worked the fence line and took selfies with fans with ease. He is the first East Asian American to make it this far in a presidential primary, but he has drawn criticism for his self-deprecating jokes centered around stereotypes.

Yang has been telling voters that nobody in Washington can fix the country’s problems. He mentioned onstage that Washington is a “town of followers,” not leaders, and that he can be the one to “bring a wave crashing down” on the system.

“If Trump could win, Yang has a chance,” said Brian Leu, a 23-year-old engineer who stopped at the rally on his way home from work.