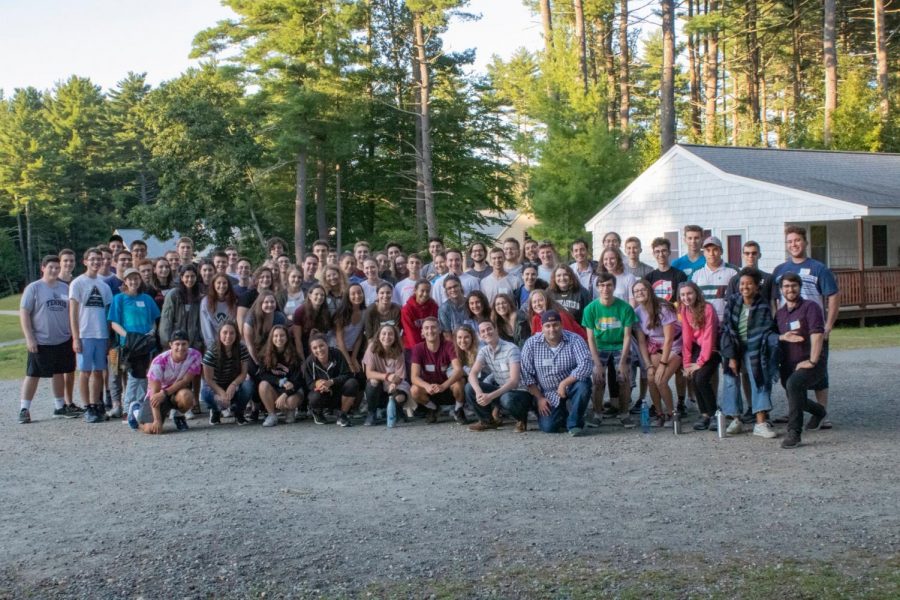 Over 60 freshmen participated in Hillel's Freshfest at Camp Ramah.

For a lucky few, the normally chaotic campus move-in process can be a breeze. Northeastern runs multiple programs prior to move-in to give students a chance to beat the rush. The programs include Hillel Freshfest, NU Aces, the Honors Program, Ujima Global Leaders and an early-arrival experience for international students.

Marisa Palace, a first-year business administration major who participated in Freshfest, said the program helped her transition into her college experience.

“I am so glad I did it,” Palace said. “I am glad I was able to get settled at Northeastern and in Boston with a strong group of friends.”

Freshfest is a program run by Hillel, an organization that brands itself as the “center for Jewish life at Northeastern.” During Freshfest, Jewish freshmen came together to participate in faith-based activities such as a post-move-in mingle session and a bagel breakfast. Students then went to Camp Ramah in Palmer, Massachusetts, where they spent the night and were able to create bonds with other students in Hillel while learning more about the program.

The Honors Program also ran its own Welcome Week programming to introduce honors students to the school. Activities included a social carnival, a scavenger hunt and an induction ceremony. The honors students were able to meet and connect with their peers in their classes and on their floors.

“The mandatory honors activities made things a lot less scary, because you know people are just like you and that you’re not alone,” said Samantha Sabah, a first-year biology and mathematics major in the Honors Program. “Being able to attend these events helped me to already have friends before classes even started.”

The honors programming did not end once the school year began, Sabah said. There are programs throughout the year to keep the students connected. Additionally, all honors students take certain classes together, which helps strengthen connections that students made during the early move-in activities.

Another early move-in opportunity, catered toward international students, is run by the university to ease the transition into living abroad. According to a statement from Northeastern on the program’s website, it is “designed to offer additional support and resources as you settle into life at Northeastern and explore the city of Boston.” International students also get help navigating the public transportation system as well as dealing with technology issues such as phone plans.

The students in this program participated in numerous activities including a Red Sox game, a Boston Harbor cruise and a movie night with an ice cream social. Students said these activities allowed them to get acclimated to the city as well as make friends.

One additional program, run by NU ACES, or the Northeastern University Alliance of Civically Engaged Students, is a community service-based early arrival program in which students get acclimated to college life by collaborating with other freshmen volunteering around Boston. Students participated in programs at Community Servings, Cradles to Crayons and other organizations in Boston.

“It was nice to start college by doing something meaningful,” said Adam Novak, a first-year biochemistry major who participates in NU ACES.

Novak said his favorite experience during the week was working with the organization Cradles to Crayons, a non-profit organization that focuses on providing children with resources they need through donations, such as clothing and backpacks. The NU ACES participants helped the organization package some of these donations. Novak said that in the two hours that they were there, they were able to help about 1,000 kids.

Another program, the Ujima Global Leaders program, is facilitated by the John D. O’Bryant African American Institute. Students were introduced to the institute through numerous workshops in their first week in preparation for the start of the school year.

In a statement on the Institute’s website, they summarize their mission as, “a program focused on developing leaders for an increasingly diverse and complex world.”

The program brings together students of diverse backgrounds to collaborate and create a community through which they can receive aid in seeking out opportunities for growth, both academically and in the community.

Students said that in choosing to take part in these programs, they were able to ease their transition into college life while getting the opportunity to be fully immersed in something meaningful to them before starting their school year.