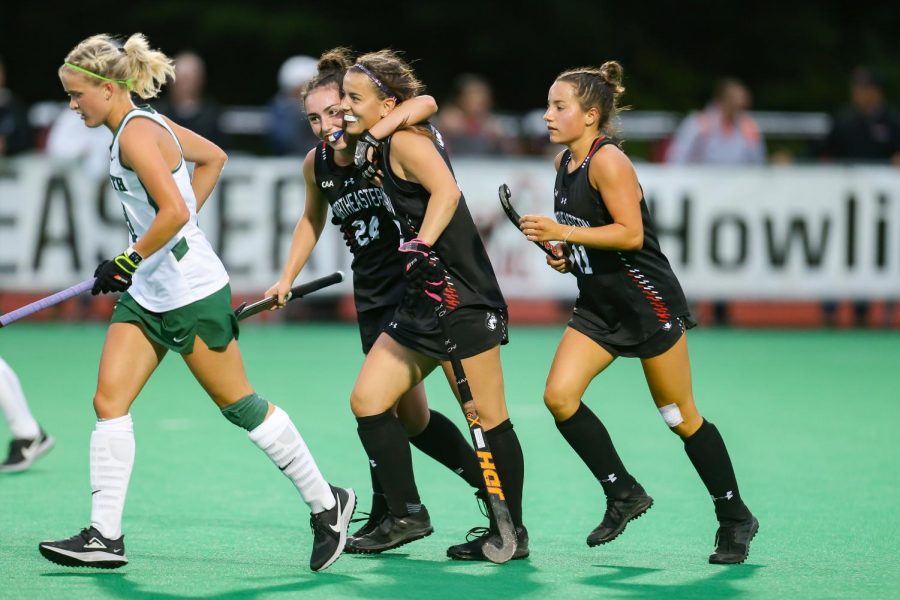 It’s every coach’s goal to have new players come in and make an immediate impact. For some coaches this remains a distant dream, but Northeastern field hockey head coach Shelly Morris only needs to look at the dynamic freshmen leading her team in scoring to have that dream realized.

Lauren Rowe and Alli Meehan have been stuffing the stat sheet since the day they arrived on campus. The two have combined for 27 points through the opening five games of their careers, each earning a CAA Rookie of the Week award in the process.

Rowe, originally from Norwich, England, always knew she wanted to come to the United States for college. The Huskies are certainly thankful she made that decision — Rowe has scored five goals and added six assists (both leading the Huskies), ranking fourth in the country in points per game and tied for second in assists per game.

“I wanted to come to America because of the different training environment, how we would be training every day and just being on the field more, getting more touches on the ball, pretty much just getting that extra time,” Rowe said. “I kept my options open, like I looked to go to university back home, but my preference was always to come here.”

Meehan’s hometown of Norfolk, Massachusetts isn’t quite as far away, but her impact on the team is just as great. Meehan’s five goals are tied with Rowe for highest on the team and see her tied for eighth in the country in goals per game, along with her English teammate. She scored in the first four games of her collegiate career, including twice in a Sep. 8 loss to BU.

“I feel like I was ready and prepared, but obviously the first game is like getting the first jitters out and getting used to playing around new people who I haven’t played with,” Meehan said. “I think so far I’ve adjusted pretty well and we’re still pretty early in the season so obviously it can go up.”

Morris’ appreciation of her new stars goes far beyond just their scoring ability.

“Lauren’s pretty dynamic of a player, but she’s just got such a great presence about her,” Morris said of Rowe. “Just her demeanor on the field and just the way she plays, what she sees and how she sets up other players — she’s just a great playmaker, it’s just fun to watch.”

Rowe is a self-described “tenacious and resilient” player.

Meehan possesses elite quickness and agility, Morris said, something that sets her apart from other players on the pitch.

“She can find that separation, with her hand speed and her skills to get the eliminations that she needs to free herself up for some shots,” Morris said. “Her speed — nobody’s really matching her right now when she gets it.”

The Huskies are 3-2 on the year. They opened the season with three straight wins, thanks in large part to Meehan and Rowe. Meehan struck the winner in overtime against Monmouth Sep. 1 (off a Rowe assist) and Rowe notched her first collegiate hat trick in the following game against Dartmouth.

But it’s not just the two freshmen who are helping the Huskies to such a strong start. Morris said the team culture has developed into a positive force.

“I do think the atmosphere is great,” Morris said. “I think they’re really working off each other well, and playing together defensively and on attack. While Lauren and Alli have done a great job, we had six different people score in the Dartmouth game.”

That atmosphere is helping both Rowe and Meehan appreciate what they bring to the table.

“On the field, she’s, by far, one of the most skilled players we have in the team,” Meehan said of her classmate Rowe. “Her knowledge she has of the game is so far beyond mine even and she just has so much advice to give us on and off the field.”

The freshmen connected for three goals in their opening three games, with Rowe assisting Meehan twice and Meehan returning the favor against Dartmouth to give Rowe her hat trick.

“She has such a good work rate on the field and also off the field when it comes to just training independently or workouts we get given outside of pitch time,” Rowe said of Meehan. “She knows when to pass the ball and when to use her skills and she’s got an excellent skill set. She’s always in the right places when I want to put the ball into the circle and she gets a good touch on it.”

Part of the credit for the remarkable team atmosphere is due to the program’s summer trip to Argentina thanks to the Northeastern Athletics Global Experience Fund.

To the freshmen, the trip served as a way to not only get game experience with the team, but also to get acclimated to their new squad.

“Definitely coming into August and preseason, I felt a lot more comfortable around the rest of the team because I’d already met them and everything so that was nice,” Rowe said. “I think it made that process a lot easier and that moving in easier for us.”

While the two having so much scoring success early on is a boost for the team, they’re not the only one’s contributing to NU’s high-octane attack.

“We have a bunch of different people that are adding minutes and adding plays to what we’re doing, and we’re not just relying on certain situations or certain people to do that,” Morris said. “If somebody’s not having a good day somebody else is picking up that slack, which is great to see.”

With 10 different players registering a point on the year, the Huskies are sharing the wealth in front of goal.

“Obviously there are so many other people in the team who deserve accolades too, because the wins we’ve been getting are team wins,” Meehan said. “We’ve all been working together and I hope that that continues for the rest of the season.”