Barns Courtney connects with the crowd at Paradise Rock Club 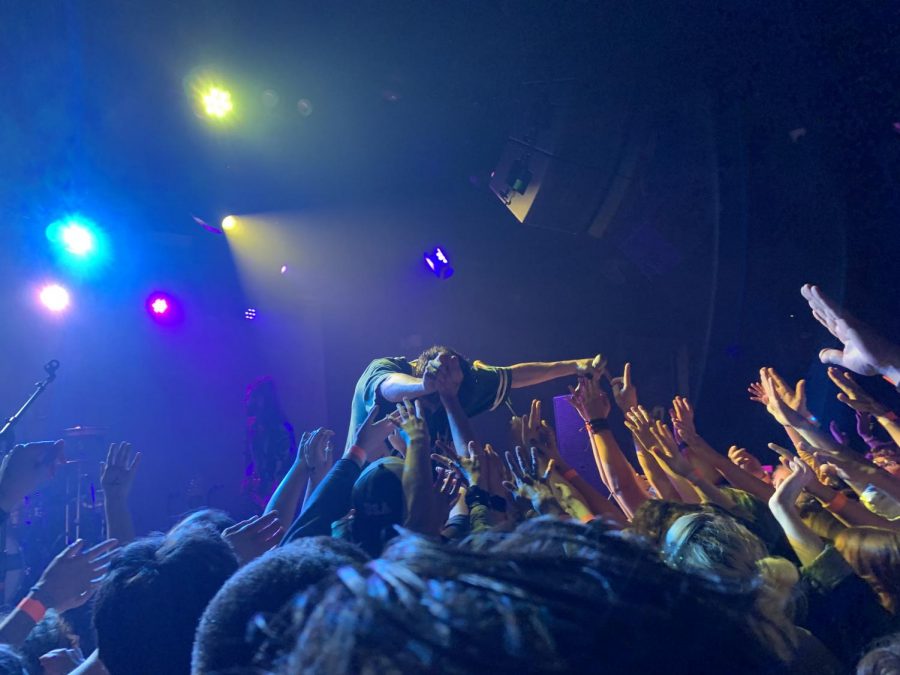 The walls to the Paradise Rock Club are covered in the names of early rock legends: U2, Blondie, AC/DC, The Police, even Snoop Dogg. After Barns Courtney’s performance on Tuesday, Sept. 10, it would not be a surprise to see his name among the others.

Opening with “Fun Never Ends” from his newly released album 404, Courtney quickly set the spirited tone for the rest of the night. With a Mick Jagger essence, he duck-walked across the stage, tried to swing the microphone back into his hand and jumped around.

Courtney kept the crowd’s energy alive with “London Girls,” another recent release. The crowd hopped and swayed with the singer’s curls to the vivacious ode about girls back home.

For an underground British rocker in America, Courtney was shocked by the audience’s energy and intensity.

“How are you like this on a Tuesday night?” he said. “I think you came here to party. I wonder what you guys are like on a Friday.”

Several songs from Courtney’s 2017 debut album The Attractions of Youth separated the die-hard fans from his newest admirers.

Although there were a fair share of college students in the crowd, the majority of the general admission audience was over the age of 30 or 40; however, almost everyone knew to wear leather, apply heavy eyeliner and sport black clothing.

Courtney deterred from his lively British rock tone to mellow the crowd with “Little Boy,” a song reminiscing about his youth and dreams, pessimistic about the path he is on.

But the calm didn’t last long, as he fired into more recent releases like the debut song off 404, “Hollow,” and his catchy single “You and I,” with bright, multi-color lights giving off a carefree vibe.

“99,” the first single released from 404, had the audience dancing and singing along as Courtney yearned for a love in the 90s, with references to Nintendo and Atari.

Courtney closed the show with a few of his most popular songs, including his euphoric, eclectic hit “Golden Dandelions.”

The red leather, custom-made 404 jacket he wore with nothing under came off during his head-banger “Kicks.” He replaced it with a baseball jersey featuring Disney’s Grumpy the Dwarf that a fan gave him and climbed the speakers of the venue to continue belting lyrics. Courtney then dove into the audience to crowd-surf as the guitarist soloed chaotically.

As the drummer started the final song on Courtney’s set, the guitarist allowed a fan the chance to lead a call and response into his most identifiable single “Fire,” currently found in Cadillac commercials.

It seemed Courtney did not read the large sign asking the general admission crowd to neither mosh nor crowd surf, as he encouraged the entire audience to jump and enjoy themselves.

As the song neared its end, he asked the audience to get low and stepped into the crowd to mosh with them as he sang the final lines: “Lord gimme that fire/Burn, burn, burn.”

Courtney took his final bow, but the crowd wasn’t finished. While it’s typical for most rock artists to prepare an encore and fake an exit, Courtney does not typically perform an encore.

However, on this Tuesday night in Boston, the crowd screamed for an encore until Courtney eventually came back to the stage alone.

“Holy [expletive],” he said. “Boston, I don’t do encores. People expect them and they get dull. I’m getting choked up.”

He then performed an unreleased ballad titled “Hard to Be Alone,” about the struggles of feeling lonely and abandoned, before finally saying goodbye.