Roster preview: Men’s hockey is stacked on defense, but questionable in goal 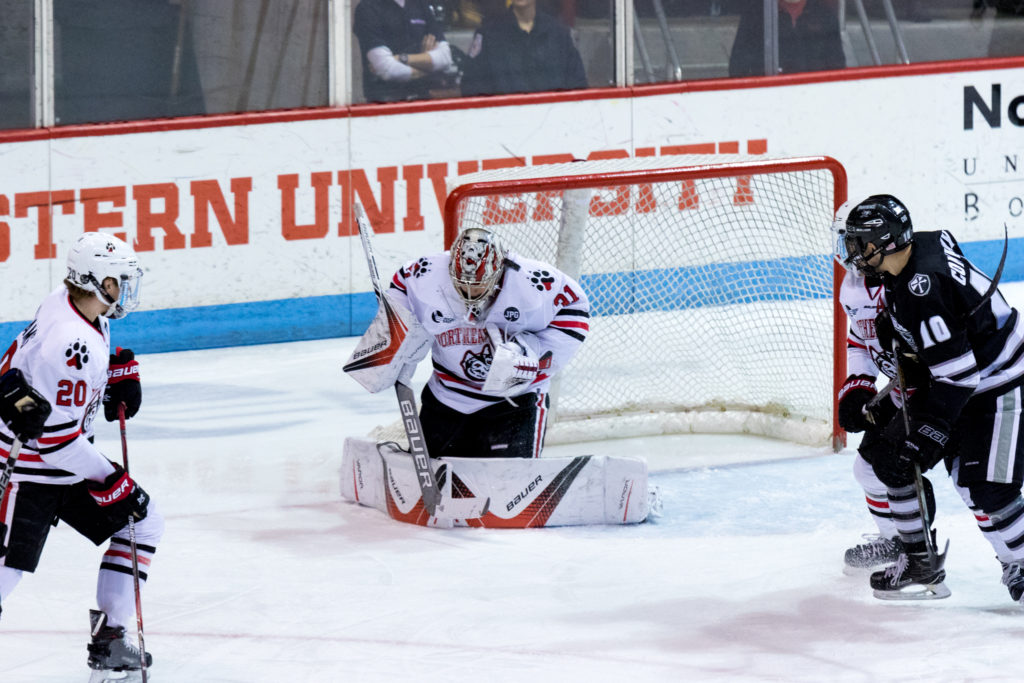 The Huskies will need to really step up to make up for the loss of Primeau, shown here trapping a puck.

Northeastern finds itself in much the same position it did a year ago. In September 2018, the team had to replace three immensely important players — forwards Adam Gaudette, Nolan Stevens and Dylan Sikura. Today, NU is preparing to defend a Hockey East title after two notable departures left gaping holes in the roster: defender Jeremy Davies and goalie Cayden Primeau.

The Huskies were picked to finish fourth in Hockey East this year by the Hockey East Writers & Broadcasters Association. They will likely need to exceed that in order to make NCAAs. Here’s a breakdown of the roster that will decide the outcome.

It’s a younger group this year, and that long list of freshmen will need to produce some offense this season. Besides Tyler Madden, none of the upperclassmen produced over 25 points in 2018-19.

Picking leads the way in experience with 86 games played in his career, but only has eight goals in that span. Jozefek reached double digit goals (10) last year to up his career total to 18. Solow had 23 points. Van Riemsdyk, a transfer from New Hampshire, adds some intrigue to the senior class; he scored 20 goals and 44 points in three seasons at UNH, including 10-6-16 last year with an eye-catching 18.9 shooting percentage.

The real centerpiece of this group now is Madden, who racked up 12 goals and 28 points as a freshman center. Not only did he score 12, he managed to give himself the nickname “Mr. Bright Lights,” and go on to actually earn it. He scored an overtime winner at Matthews against No. 1 UMass and the overtime winner in the Beanpot against BU. If the Huskies go anywhere this year they’ll need to win close games, and Madden continuing to score in key situations would be a big help.

A couple freshmen to keep an eye on as October clicks into gear: right-winger Hughes and left-winger McDonough.

Hughes, a 19-year-old from Westwood, scored 58 points in 52 games in the British Columbia Hockey League last year. McDonough, older than Hughes at 23, played in the prestigious United States Hockey League and tallied 42 points in 50 games for Cedar Rapids.

Defense is easily this team’s strength. There’s a heavily-experienced veteran, some candidates to step up into expanded roles and a couple extremely exciting rookies.

The headliner here is Struble, who was drafted 46th overall by Montreal in the 2019 NHL entry draft. He’s just 18, and last year racked up 40 points in 28 games of prep hockey as a defender. For a team strapped for offense, Struble could be a needed sparkplug bringing the puck out of the defensive zone.

Shea has played every game since arriving as a freshman and accrued 72 blocked shots last year in 39 contests. The youngsters, Struble and Bucheler (44 points in 54 games of junior hockey last year), could drive an aggressive style of play, but Shea will bring a needed stability and defensive presence.

Harris impressed last year paired with the excellent Jeremy Davies. Now that Davies is gone, look for Harris to anchor a pairing of his own and step up even more.

This is the question we’re all here to answer. Can the Huskies come close to repeating as Hockey East champs without Primeau? The team bled shots late in the season last year and many of their wins were due to the goalie stealing the show. What the Huskies accomplish this season will depend on if this group, namely Pantano and Murphy, can replicate Primeau’s production, or at least come close.

Pantano transferred from Merrimack to take Primeau’s place, but one look at his numbers at his former school gives pause. He had a steep dropoff between his sophomore and junior seasons. His 2017-18 GAA of 2.33 and save percentage of .915 turned into 3.52 and .889 in 2018-19. Granted, Merrimack was horrible last year (7-24-3) and the Huskies have to be hoping the team sunk the goalie, not vice versa.

Murphy is a larger frame at six-foot-four, which is how the goaltending position is trending these days. He posted a solid 2.07 GAA and .917 save percentage in the Central Canadian junior league last year.

Look for Pantano to claim much of the starting duties, but if he struggles, Murphy could be an easy option for coach Jim Madigan to slot in — much like Primeau replaced an injured Ryan Ruck in 2017.