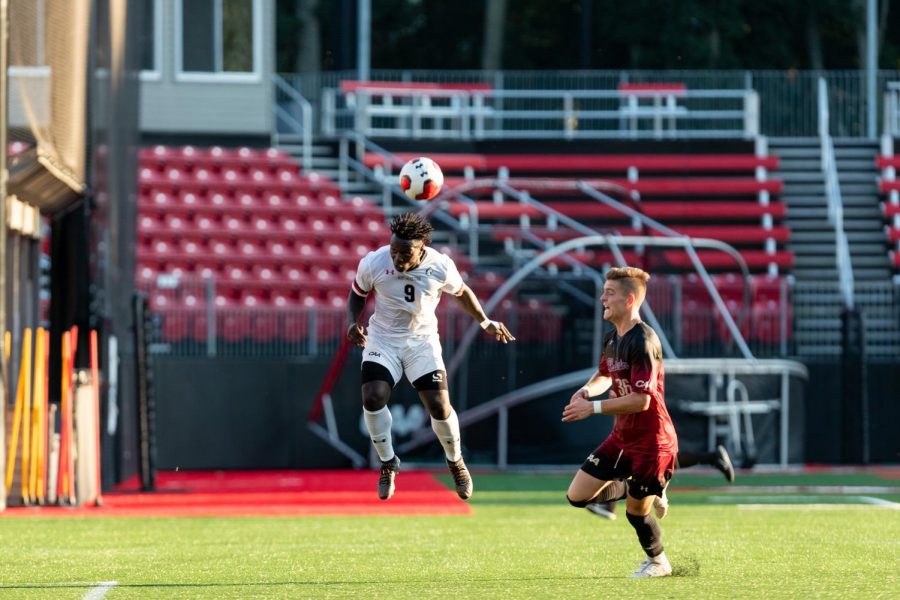 Redshirt freshman Timothy Ennin heads a ball during a match against Charleston.

Boston University (0-7-1) put up quite a fight in a bid for their first win of the season. Though there were 25 shots, the game was characterized by strong midfield play and a chippy atmosphere, as the teams combined to commit over 40 fouls.

BU came out of the gates fast, putting early pressure on the Huskies’(5-2-1) midfield and defense while winning a few free kicks near the NU box. The Huskies were largely on their heels for the first 15 minutes of the half.

That all changed when Ennin, a redshirt-freshman, broke away down the right side and threatened goal, forcing BU sophomore defender Nate Cole to commit a foul inside the box. Cole’s push from behind gave the Huskies a penalty kick, but sophomore keeper Edgar Schottland Levy, starting in his first Division I game for the Terriers, made an incredible save off NU sophomore midfielder Jacob Marin-Thomson’s shot to keep Northeastern off the scoreboard.

As the half progressed, it was more of the same — Northeastern struggled to possess the ball and create chances. It did not help when junior midfielder Dan Munch exited the game after 20 minutes due to an apparent leg injury. But the Huskies kept pushing, and as the half progressed past the midway point the tide began to shift.

As halftime approached, both squads increased their urgency to score, as sophomore defender Jack Monte nearly scored with a header in the 35th minute that blew just wide right.

The Huskies’ junior goaltender Noah Abrams was forced to make two incredible saves in the final 10 minutes to keep the score level, one on a shot fired from 25 yards out and the other a volley off a BU corner kick. The teams entered the locker room at halftime in a dead heat, with the Huskies having the slight advantage in possession but the Terriers ahead in chances with six shots to NU’s five.

Just like the first half, BU came out swinging for the first 10 minutes of the second, putting high pressure on the Huskies and creating a number of chances. The ball was kept largely in Northeastern’s defensive third until the team settled in and finally saw some contributions from sophomore forward Benjamin Klingen, who jump-started the team’s offense with a fantastic physical run up the right side.

Though it did not result in a goal, it woke up the Huskies front line, as they rattled off a few quick crosses in the following minutes. The best chance of the game came with 24 minutes to go, as Ennin broke away down the left wing off a fantastic touch past his defender. As he approached goal, he took one touch too many and felt the pressure of a closing BU center back, putting his shot wide to the right.

The closing minutes of regulation saw NU continue to up their offensive energy, with Klingen creating a number of chances but none ended with the ball in the back of the net. The defense and midfield of both teams should be commended, as both showed resilience and refused to give the opposition any open passing lanes in their own third.

As overtime began, the Huskies clearly had momentum carry over from the second half. Munch returned to the field and provided some much needed energy to NU’s attack, ripping a shot in the early minutes that careened just wide.

This culminated in a penalty kick won by Huskies junior midfielder Adama Kaba midway through the second overtime as he sliced through the right side of the box. Though he did not appear on the stat sheet, Kaba was critical throughout the game, calmly transitioning NU from defense to counterattack and putting in a number of important tackles.

Ennin made it official for the Huskies, placing his shot perfectly in the bottom left corner to give the Huskies a hard fought 1-0 win.

The Huskies improved to 5-2-1 on the year and remain at 2-0-1 in conference play with the win. Next up for Northeastern is a conference matchup this Saturday at UNCW (3-2-1) in Wilmington, North Carolina where they hope to continue their best CAA start since 2013.