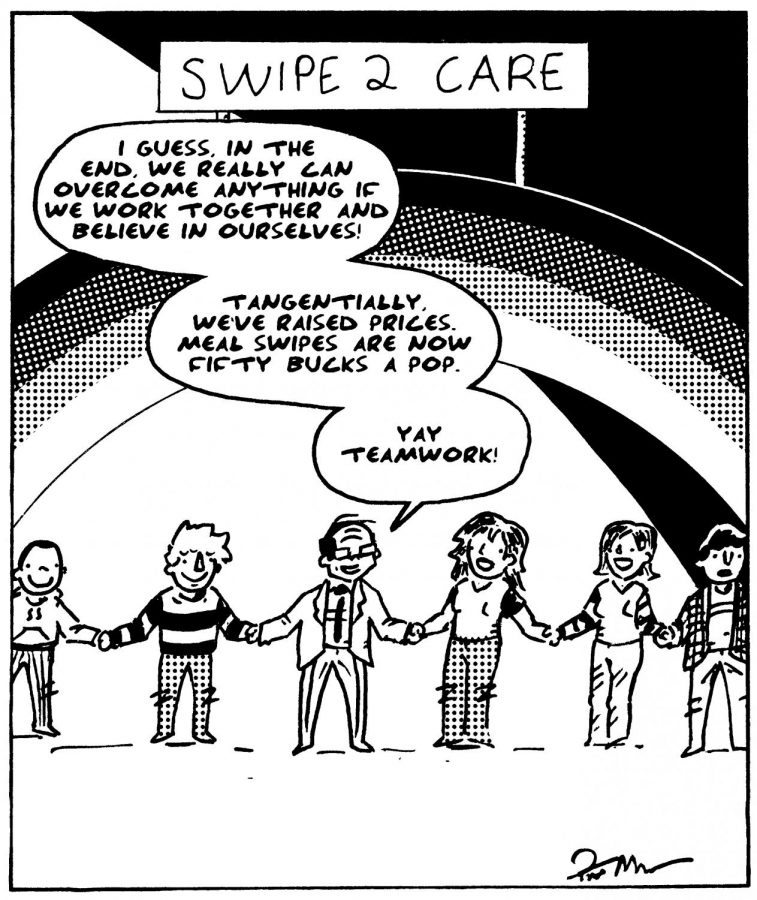 The average American spends approximately $4 per meal, dining out included, according to a Bureau of Labor Statistics report. The average Northeastern first-year student spends $14.27 per meal.

From the late August move-in to finals week in December, most Northeastern first-year students spend about 15 weeks on campus. If a student selects the default plan of 17 meals per week, they are purchasing 255 meals and 200 dining dollars at a price of $3,840. Therefore, the student pays $14.27 per meal — a price nearly four times the amount spent on a meal by the average American.

So, why is the food so expensive? The maintenance of a university dining hall requires a notable amount of labor, from cooks to dishwashers to cashiers swiping Husky Cards. Additionally, the university must pay for the installation and upkeep of the various facilities such as soda machines and pizza ovens. While these factors may merit the dining hall’s pricing above the average of $4, a price of $14.27 per meal crosses the line from bothersome to absurd.

Colleges serve to educate, but they are businesses nonetheless; perhaps the university views dining services as another profit opportunity. First-year students are likely to apportion a food budget for their time on campus, but the university has manipulated the system so the majority of these budgets are funneled into Northeastern wallets. Their tactics include requiring all first-years to purchase a plan of at least 12 swipes per week; and only accepting meal swipes at dining halls and Northeastern affiliate restaurants such as Rebecca’s and Café Crossing.

Nonaffiliated campus chains such as Qdoba, Popeyes and Dunkin’ only accept dining dollars, which quickly dwindle. Thus, students tend to eat at the dining halls and Northeastern cafés rather than the more reasonably priced restaurants since swipes are pre-purchased. Considering the lack of kitchens in first-year residence halls, it’s clear that the university has garnered a near-monopoly on on-campus dining.

However, the problem is larger than minor complaints from students. The exorbitant prices place a financial burden on lower-income students, creating a culture of inaccessibility at an institution focused on inclusivity. According to a Wisconsin HOPE lab study of 43,000 college students in 20 states, 36 percent of students were food insecure within the 30 days preceding the study. If such a harrowing number isn’t enough of an incentive for Northeastern to create a more accessible alternative, perhaps the academic repercussions of food insecurity on students will inspire change.

Temple University Professor Sara Goldrick-Rab told NPR that food-insecure students’ grades “suffer, their test scores appear to be lower, and their overall chances of graduating are slimmer.” University rankings, donations and overall profits are contingent upon student success rates, and the overpriced meal plans may play a role in hindering student success.

To be fair, Northeastern has not completely disregarded the problem. In an effort to combat criticism of meal plan prices, SGA rolled out the Swipe2Care program in October 2018, which enables students to donate their leftover meal swipes to students struggling to find their next meal. While a nice sentiment, the program is a temporary bandage over the problem rather than a viable solution — and it redirects the responsibility from the administration to the students.

NU students should be offered a cost-effective alternative to the current meal plans, as reliance upon peers’ leftover meal swipes is not a solution to the crisis of inaccessibility. One way to increase food security among students is to offer meal plans at every price point. For example, satisfied students can adhere to the current meal plan options if they so choose, but students burdened by the high prices should not be boxed-in.

Under the current system, every student pays to sustain the labor, facilities and higher-quality food demanded by full tuition-paying students, but not every Northeastern student is so unbothered by the high prices. These individuals should have an alternative, whether it be access to a plan with a lower quantity of meals (since first-years are currently excluded from the seven swipe per week plan), the privilege to save leftover dining hall food, kitchens in residence hall basements or the chance to opt out of a meal plan completely if the cost is too burdensome.

Despite the understandable need to profit and grow as a business, Northeastern should prioritize the well-being and education of its students. Revising the meal plan to support the lower-income members of the student body may slightly reduce the university’s profit from dining services, but Northeastern will continue to generate revenue from other means such as tuition, donations, and dialogue programs. If changes to the plan options are enacted, hopefully students will stress about their next exam or co-op interview — not their next meal.