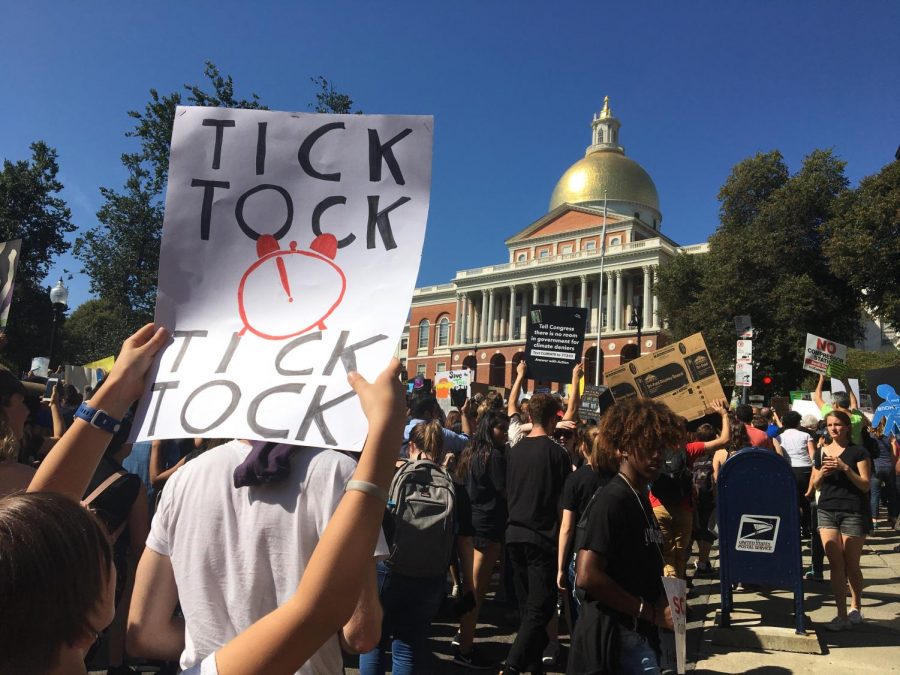 A demonstrator taking part in the Global Climate Strike holds up a sign outside the State House.

Ella Wozek, a sophomore at Waltham High School, hopes to go to college and enter the medical field one day. If, as scientists at the International Panel on Climate Change predict, the world only has 11 years to prevent temperatures from reaching above 1.5 degrees Celsius above pre-industrial levels, it is unlikely that Wozek will ever fulfill her dream.

“This is our future at stake,” said Wozek, who participated in the Global Climate Strike that took place in cities around the world Friday.

Young people from across the Commonwealth arrived at Boston City Hall in droves to participate in the strike, organized by Massachusetts Climate Strike, a coalition led by climate activists all under the age of 20.

Unlike schools in Boston, Waltham High School did not openly permit students to participate in the strike. This did little to stop the students, however. Wozek estimated that close to 30 students from her class also attended.

“We want to make a difference,” Wozek said.

Kristin Terry, a third-year political science student at Northeastern, was also at City Hall to push for change.

“If we don’t make a change, who will?” Terry said. “The older generations aren’t standing up to do what they should.”

Most of those in the crowd also felt there was more the city should do to protect their communities from climate change.

“Boston needs to focus on sustainability, especially with rising sea levels,” Terry said. “When sea levels start to rise higher, Boston will be one of the first cities to feel its effects.”

“We’re only about 21 feet above sea level, so we’re vulnerable,” Setteck said.

With rising sea levels and the increasing number of natural disasters in recent years, Settek said it is vital for the city to take drastic action.

The energy at the event was palpable — a mix of gleeful championship parade spirit and somber demonstration. People of all ages came out — from those too young to walk to those in wheelchairs. Students carried signs, chanted demands for the Green New Deal and sang and danced along to songs blaring from the speakers on stage.

All who attended came together for the same purpose, but were motivated by a variety of reasons. Larry Stoodt of Arlington attended the strike with the Sierra Club to support the students and to fight for a future for his two grandchildren, ages 5 and 8.

“If you add 11 years to that, their teenage years are going to be in the middle of climate chaos at a level that we have not yet seen,” Stoodt said.

Paul Howlings, a marshal at the event, said he attended because he was “cycling between despair and avoidance of the subject,” and felt the need to do something about it. Young climate change activist Greta Thunberg, he said, is also one of his heroes.

“She says, ‘I don’t want you to give me hope. I want you to panic.’ That’s the kind of sense of urgency we need,” Howlings said.

Howlings also expressed dissatisfaction with the actions Massachusetts leaders have taken so far.

“We can rush toward disaster or slouch toward,” Howlings said. “Either one is going to take us in the same direction. Right now we’re rushing toward it. We need to get people who really want to reverse direction.”

Many of those in the crowd also hoped the strike would convince city and state leaders to take new and increased action on climate legislation. Conor McGuire, director of sustainability at Columbia Construction Company, hopes the state updates its “stretch code,” a more stringent building code than the baseline state code that cities within the state can opt into.

Noa Dalzell, state carbon pricing network coordinator at Climate Xchange, is advocating for a bill that would put a price on carbon pollution in both the transportation and heating sectors, a plan that Dalzell says would “reduce emissions rapidly over the next 15 years or so.”

Tim Cronin, policy and partnerships manager at Climate Xchange, is advocating for the same bill. This is the third session they have put forth the bill, but although they have a majority in the Massachusetts house and the senate, “leadership on both sides are blocking the bill,” Cronin said.

When it came to discussion of state leadership at the strike, no topic aroused more indignation from Stoodt than Rep. Joseph Kennedy III’s plan to run against incumbent Sen. Edward John Markey in 2020.

“My time and money is going to be tied up in Massachusetts to defeat a young man who has little record compared to the person he is running against,” Stoodt said. “This is an act of arrogance.”

Cronin said though the race will divide Democrats, it will not divide climate activists. “I think at the very least you’re going to see climate change activists rally behind Markey in this election,” he said.

Despite concerns surrounding the looming threat of potential climate chaos, those who attended still offered voices for hope.

“I was talking to folks who have been long term climate activists. They said that even 10 years ago you would not get a crowd this big to talk about climate change,” Cronin said. “I think that if there’s any time in our history either in the state or nationally that we’re going to get something done it’s going to be now.”