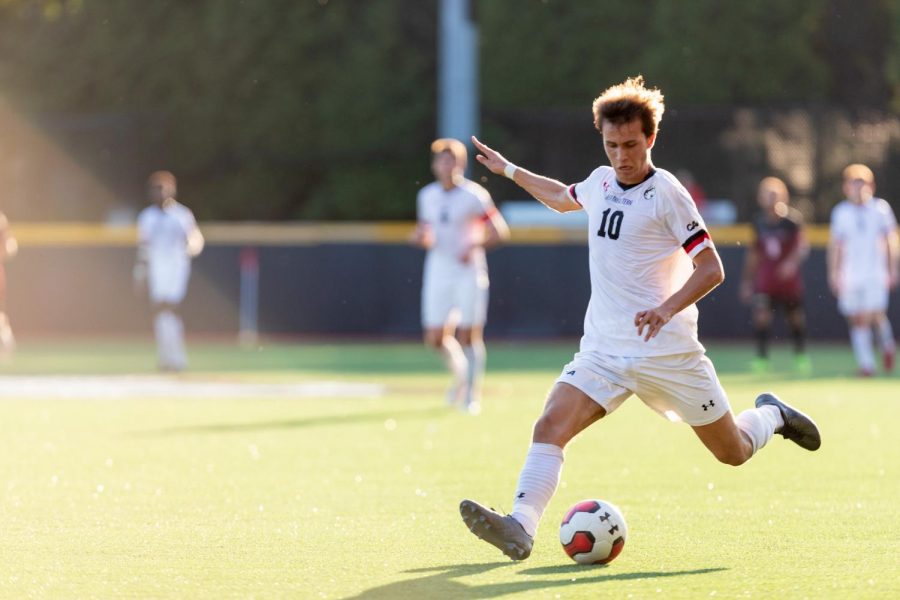 Jacob Marin-Thomson strikes the ball during a match against Charleston College.

Northeastern came away with a frustrating 1-1 tie Tuesday night against Hartford, as numerous chances to take the lead never materialized down the stretch.

The Huskies’ (5-3-2) home contest versus Hartford (6-2-1) began with disaster, as a pass from redshirt-senior defender Grant Elgin intended for junior keeper Noah Abrams was intercepted and fired into the back of the net by Hartford striker Rasmus Karlsson. Karlsson took the ball near the penalty box and dribbled past Abrams, giving Hartford a one-goal lead in the fourth minute.

Despite this miscue and the Hawks’ early control of possession, the Huskies fought back and got the equalizer.

Just six minutes later, sophomore forward Benjamin Klingen made a fantastic run past two defenders up the right side. A quick cut inside opened up a passing lane to sophomore midfielder Jacob Marin-Thomson, who turned and rifled a pass to a streaking Liam Murphy at the edge of the 6-yard box. Murphy sent his shot into the upper right corner to pull the score level at 1-1. The goal ended Hartford’s streak of five straight shutout victories.

Galvanized by the goal, the Huskies’ offense woke up, as they controlled the ball in their attacking half for the next 20 minutes of play. The offensive onslaught featured a near goal off the shot from redshirt junior Frankie De La Camara, and a great chance from Chris Rivera off a corner.Hartford senior keeper Jimmy Slayton made an unbelievable diving save in the upper right corner to deny Rivera and keep the game level, his first of eight saves on the night.

After the 20-minute offensive onslaught by Northeastern, Hartford began to settle in. Though the Hawks did not have a serious chance aside from their early goal through 25 minutes of play, they generated a few corners and had a near miss off the head of Karlsson in the 28th minute.

As the second half began, neither team made a serious push in the first 10 minutes, as the only real chance came from a Hartford free kick just outside the Northeastern box.

However, Hartford’s redshirt sophomore forward Jordan Koduah broke down the left side in the 55th minute and put two hard shots on Abrams, but the keeper was able to turn both away in his first real test of the evening.

Northeastern’s first chance of the half came with about 30 minutes to go, as Klingen made arun down the left and won a corner. Though the Huskies had three corners in quick succession, they failed to convert each time.

Soon after, with the offense seemingly stalled, redshirt freshman striker Timothy Ennin finally made an appearance to try to kick-start the NU attack, subbing in for Klingen in the 62nd minute.

The entrance of Ennin gave the Huskies new life and a flurry of offensive chances, as great ball movement from the NU front line resulted in multiple chances for Marin-Thomson, Murphy and sophomore Omar Da Naia. However, none were converted and the contest remained deadlocked at 1-1.

Fantastic ball movement from Hartford kept the ball in the Huskies’ defensive third for much of the final 25 minutes, though NU’s defense held strong.

With possession leaning in the Hawks’ direction for the final 20 minutes of regulation, Hartford carried slightly more momentum heading into overtime.

The first overtime chance came halfway through the first period, as Ennin took on his defender and beat him at the top of the box. The striker fired a beautiful, curling shot with his weak foot toward the top left corner, but Hawks’ keeper Slayton made a wonderful one-handed save to deny NU the win.

Soon after, Hartford tested Abrams with a shot rifled through traffic to the lower left-hand corner. These chances were the only two of the first period, as it was otherwise a defensive struggle similar to much of the second half of regulation.

The second overtime period began with a huge run up the middle from Klingen, but it only resulted in a shot wide right. Much of the period consisted of the Huskies continuously probing a packed Hartford penalty box with no success. Though NU controlled possession throughout the 10-minute period, the Huskies could not force anything through the Hawks’ back line and were forced to settle with the 1-1 tie.

The Huskies move to 5-3-2 with the tie, as this marks three straight games in which NU could only muster a single goal. Though they totalled 20 shots and 10 corners, they were unable to convert on all but one of these chances. Whatever the Huskies’ offensive woes, they have four days to fix them before an important conference game at home versus James Madison Saturday, Oct. 5.