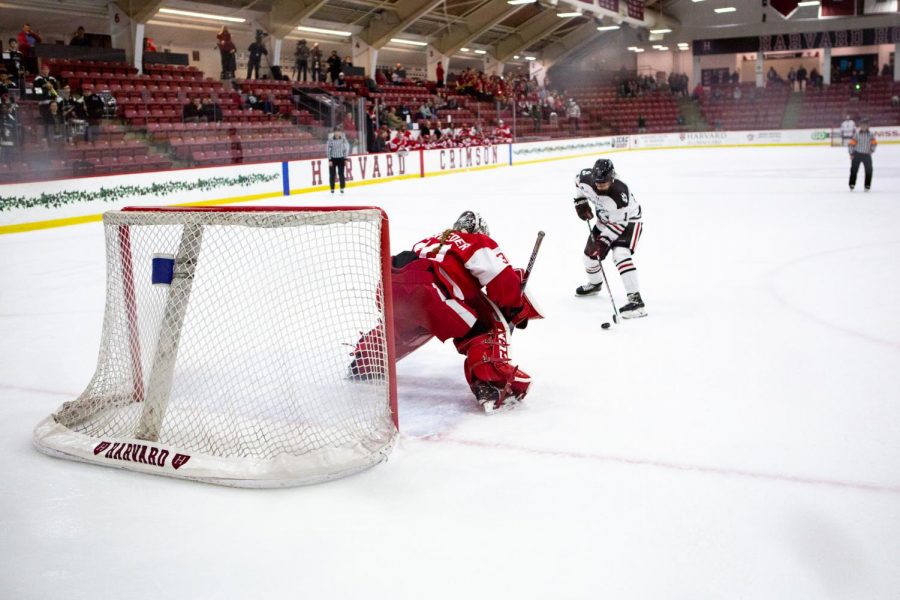 Since Dave Flint took over as head coach of the women’s hockey team, the Huskies have taken some great strides, with three NCAA Tournament berths in the last four years and back-to-back Hockey East Championships. This year, Flint is looking for something more.

“I told the team our opening meeting, the last three years or so we have had some really good years,” Flint said. “Our next goal is the Frozen Four and a national championship. With this group, we are right in that mix. We are looking to make that jump this year. To me, NCAAs is great, but we want to get to that next level.”

“BC is always one of the top teams, BU is always right there,” Flint said. “Our league is pretty tough through and through. I think the Hockey East has more parity up and down than any other league in the country.”

Even with their top-five ranking, Flint knows the Huskies won’t have any easy games, despite a relatively soft start to their season. NU travelled to New York to start their season, where they secured a decisive 5-0 win over Union. They face a Syracuse squad Friday which only won 13 games last year, but did make the NCAA Tournament after an improbable conference tournament run. The Huskies then travel back to New England to face Maine and University of New Hampshire, neither of whom finished above .500 this past season, to open their conference slate.

“Those can also be setup games where you go in a little too confident. They can sneak up on you,” Flint said of the early opponents, labeling Union as “scrappy,” the Orange as “well coached” and Maine as a very talented team that suffered from a down year. “Those teams can beat us. [This year] is definitely not as difficult as our starts the last couple years, but they’re still pretty good teams.”

Flint expected that Union was going to “throw everything at us,” a trend he doesn’t anticipate will stop at their opener. Despite that expectation, NU obliterated the Dutchmen, outshooting them 44-16 in their five goal victory. Regardless, Flint knows his team needs to “show up” every single game to repeat last year’s success, particularly given the high expectations for his team.

“Every game there’s a bullseye on us,” he said. “There aren’t going to be any easy games for us.”

Last year, the strong Husky performance was a combination of a talented returning core and standout performances by freshmen. This year, NU looks primed to repeat that same mold, setting them up as a strong national contender once again.

Flint is excited about the new and large group of freshmen joining the team, noting how well the eight of them are adjusting and picking up the uptempo system Flint employs throughout the offseason.

Flint tabbed freshman forwards Jess Schryver, Peyton Anderson and Katy Knoll as a few who have particularly impressed so far in practice, each earning a chance to skate in the opener. Schryver and fellow freshman forward Kate Holmes picked up assists in the opening game.

Megan Carter, NU’s only freshman blueliner, also skated for the Huskies against Union, cracking the top six group to start the season. Flint pointed to Carter as a player to watch this season. She picked up two shots on net during the opener.

One of the freshmen who has made a strong impression so far did not suit up against Union, but that is no knock on her talent, rather a testament to the great Aerin Frankel who remains locked in between the pipes. Newcomer Gwyneth Philips is hopefully queued up to be the next great Husky goaltender in a long line of prolific netminders.

“She’s been really good in practice and [Aerin] Frankel is gonna be my starter, but I think Gwyn [Philips] will push her for some time and we have a great backup with her in case,” Flint said.

Frankel, the reigning Hockey East Goaltender of the Year, finished with a remarkable 1.81 GAA and 21 wins in 29 starts as the brick wall to finish off the Huskies’ strong defensive core. Luckily for the Huskies, they’ve strengthened their goaltending core with Philips, who comes in with her own strong resume containing plenty of experience playing on the national stage. NU fans should expect to see her showcase her skills this season.

The list of impressive Husky hockey players does not stop with the freshmen, as an extremely strong returning core headlines this championship-contending roster. Returning sophomore forwards Alina Mueller and Chloe Aurard combined for 82 points last year, while juniors Brooke Hobson, Skylar Fontaine and Frankel put together a strong backend for the defending Hockey East Champions.

“Those are our players we need to carry us a bit, but we need contributions from everybody,” said Flint. “The big thing for us this year is gonna be consistently, showing up to play.”

Even with such an impressive season, Flint noted a loss against Holy Cross that stuck with him. The Crusaders only won a single Hockey East game last year, somehow managing it against the champs. With the team aiming for the Frozen Four, a priority going forward is to avoid losses like that, making sure the team shows up to play each and every night.

“Our toughest challenge is that consistency, especially with a young roster,” Flint said.  “For us, if we can do those things, and our top players rise to the occasion and some of our younger kids and role players contribute, it could be a really good year.”