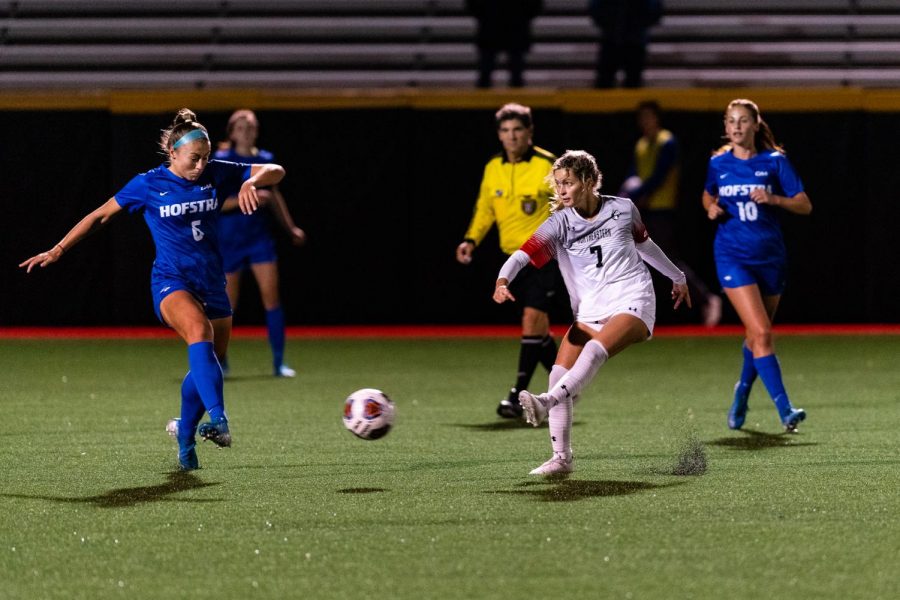 Senior midfielder Emily Evangelista lines up a pass in a game against Hofstra earlier this season.

Northeastern women’s soccer lost their second game in a row by the thinnest of margins, falling 2-1 in overtime to the visiting Delaware Blue Hens.

NU (4-9-1) had a tough start to the match as they couldn’t get their offense going, allowing Delaware (8-5) to take the first seven shots of the game. Redshirt sophomore goaltender Megan Adams, making her tenth appearance of the season, was credited with two saves before the Huskies had any movement on offense.

Delaware’s constant attack paid off in the 18th minute. The Blue Hens cashed in on a corner as redshirt freshman forward Anna Diffendal picked up her third goal of the season from seven yards out.

Coach Ashley Phillips must’ve really dialed up the Huskies during halftime, as they started the second period hot. They got the first three shots of the half and on their fourth, they found the back of the net.

Freshman midfielder Alexis Legowski fought for a bouncing ball and headed it forward into the box, lining up a line-drive shot from sophomore forward Tatiana Ortega to tie the game.

With neither team able to break through again, the match headed to overtime — the Huskies’ seventh overtime match of the season.

After a long nine minutes, the Blue Hens punched through again. Junior forward Riley Dixon was credited with an assist for her 40 yard bomb towards the net. Adams tipped Dixon’s shot off the crossbar while going back into the net, causing the rebound to fall invitingly into the NU box. Sophomore forward Sara D’Appolonia found the rebound and scored, giving Delaware a 2-1 lead that remained until the clock hit zero.

While the Huskies admirably hung with the CAA-leading Blue Hens, their loss drops them to 4-9-1 on the season with a rough 1-3-1 CAA record, placing them second to last in the conference.

NU will search for an important CAA win against William and Mary (3-8-2) Sunday.