NU professor inspires an environmentally-just future through campaigns and research 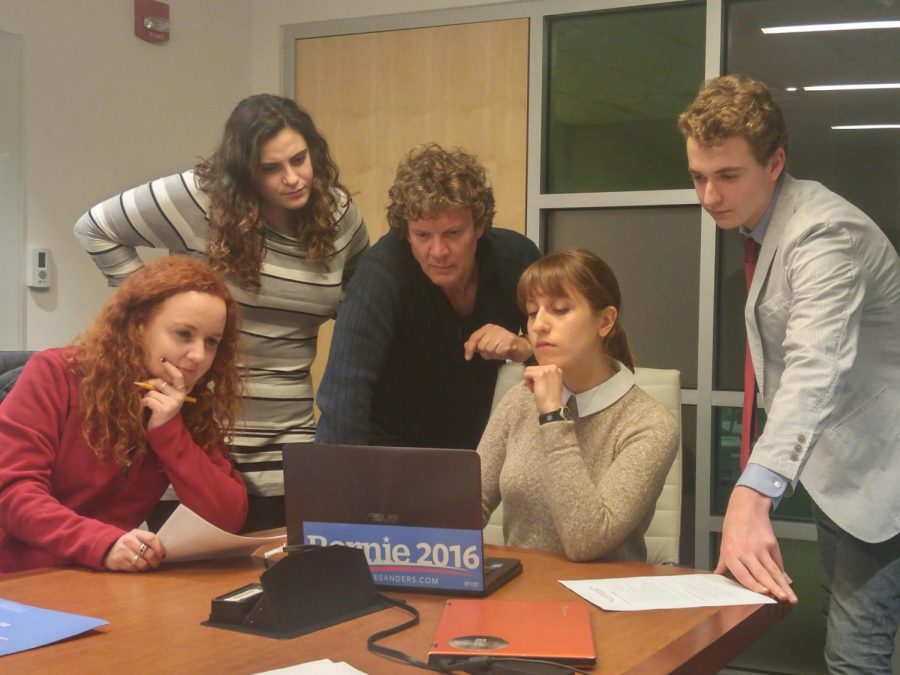 Faber, center, poses with other members of the NEJRC team.

With an office filled with books and journals, it is no surprise that Daniel Faber, professor of sociology and director of the Northeastern Environmental Justice Research Collaborative, or NEJRC, is a serious scholar. His work has granted him high status in the field of environmental justice, and his transformative approach to environmental issues facing the globe has helped to effect positive change locally and nationally.

At a young age, Faber was taught by his father to advocate for those facing issues of racial, social and economic injustice. Faber’s father was involved with the civil rights movement in the American South, focusing specifically on desegregation.

“In the 1980s, the U.S. was involved in trying to [counter] the Nicaraguan revolution, which had a very strong commitment to social and environmental justice, so we worked to bring together the solidarity, human rights and environmental movements in the United States to support these efforts by Nicaragua to forge a new development path that was sustainable and just,” Faber said.

This project allowed him to develop a passion for environmental justice and encouraged him to choose that as his career. Faber teaches a sociology class called Environment and Society at Northeastern.

“I think one of the appeals of the class is the fact that I work with so many different organizations and elected officials, but also I’m a very serious scholar around environmental politics and movements and solutions that it kind of combines both the theory and the practice … of how we can really address the climate crisis and environmental crisis,” Faber said.

Ben Levy, a doctorate student in sociology, is an advisee of Faber and co-led a Dialogue of Civilizations with him last summer called Sociology and Human Services that focused on the different social and political structures in Rome. Faber took advantage of the Dialogue’s broad scope by focusing on the relationship between Italian society and environmental movements within the country.

“Given his activism, a lot of these issues are very close to his heart, so he has not just the academic interest in a lot of this material, but a lot of it [is] political and social issues that he’s worked on personally and very personally cared a lot about and I think that’s reflected in the ways in which he teaches and engages with students, which I think is very exciting and important,” Levy said.

Another way Faber undertakes environmental issues is through the NEJRC, which was created as a way to bring faculty, undergraduate and graduate students together to conduct research addressing the global issues of environmental justice and the climate crisis. One of their first reports discovered communities of color and low-income communities in Massachusetts faced greater environmental burdens than wealthier ones.

A second report on the topic helped facilitate the signing of an executive order on environmental justice by former Massachusetts Governor Deval Patrick. The order was one of the first in the nation to prioritize communities that are disproportionately affected by environmental injustices such as the development of toxic waste sites.

Northeastern students also play a large role in the NEJRC. Laura Bernstein, a fifth-year sociology and environmental studies combined major, has been working with the NEJRC since her freshman year. Her first project involved research for the Polluter Industrial Complex report, which focuses on companies that contribute the most to pollution and change environmental policies to reflect their interests rather than public interest.

Bernstein is also working on the Circle of Poison report, which looks at pesticides that are that are banned in the United States but still exist here because they are allowed to be shipped to the country via crops grown in other nations.

“We are looking now, under Trump, at how there’s been massive deregulation on pesticides … we’ve been co-authoring a publication which will hopefully be done by the end of this semester looking at the deregulation of pesticides and the implications at the national and global scale,” Bernstein said.

Bernstein also writes and edits for the NEJRC’s newsletter, which gives the local community access to relevant environmental justice news.

Faber is also well known for his work developing the environmental justice platform for Senator Bernie Sanders’ campaign during the 2016 presidential election. Working with other leading experts on environmental justice policy, Faber helped create a detailed plan, much of which was adopted by Sanders for his debate with Hillary Clinton in March 2016.

“The platform in its entirety, what I proposed, got leaked to Hillary Clinton’s campaign. So she actually ended up adopting a lot of what I had written as well, which at first was a little strange, but then I realized, well, it’s good, because it really advances the policy as a whole. It’s good that they put pressure on one another,” Faber said.

Faber believes that his work with the Sanders campaign has helped push the Democratic Party in a more progressive direction. For this reason, elected officials often seek him out to help develop platforms related to the issues of environmental justice and climate change.

In an effort to deal with issues of climate justice in Boston, Faber has been working with Boston City Council member Michelle Wu to develop a Green New Deal for Boston. Faber also has plans to meet with Rep. Joseph Kennedy III, D-Newton, to help develop a climate justice platform for his campaign for the U.S. Senate.

“I don’t think there’s a real good blueprint, or what we call a ‘greenprint,’ for how to [address these problems], because this is brand new terrain. And so I think, again, we have some expertise in that and that’s why we’re starting to see elected officials come to us for some insight, whether they’re city council presidents or congressmen or presidential candidates,” Faber said.

Faber brings a hopeful perspective to an otherwise serious and challenging threat. He believes students of any discipline can help advance the environmental movement, whether that involves engineering new technologies or advising policy makers.

“So much of the focus on environmental justice was on a distributed notion of justice, like the need to more equitably distribute the harms,” Faber said. “But my view is that the goal of [the] environmental justice movement is not to ensure that all people are polluted equally, but rather to really go to the root causes by which these problems are produced in the first place.”