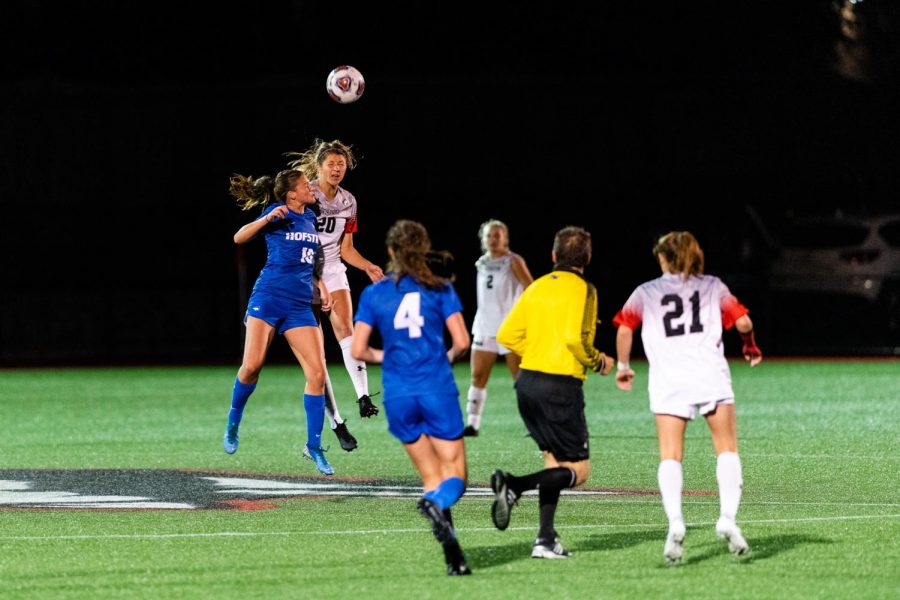 Freshman midfielder Alexis Legowski goes for a header in a match earlier this season versus Hofstra.

With a 5-0 win over Drexel University Thursday night, and a subsequent 4-0 win over Elon Sunday, the Northeastern Huskies will compete in their ninth-straight CAA tournament, the longest streak among active teams.

The Huskies (8-9-1, 5-3-1 CAA) finished their regular season on a strong note, winning their last four games, with the last three being shutouts.

The largest winning margin of their final four games came against the Drexel Dragons (5-10-3, 1-7-1 CAA). The Huskies stormed out with three goals in the first half of play.

Senior midfielder Kerri Zerfoss struck first, picking the ball up on a counter attack and pushing it past Drexel senior goalkeeper Libby Baeza to put the Huskies up 1-0.

In the 17th minute, senior forward Olivia Ware sent her fifth goal in five games into the back of the net to secure a 2-0 lead. Redshirt sophomore forward Kayla McCauley picked up an assist on the play.

NU continued their rampage of the Drexel box 10 minutes later as junior defender Mikenna McManus stole a failed clear away from the Dragon defense and pushed it to the left of Baeza, giving the Huskies a 3-0 lead.

The second half began with a marvelous solo performance by junior forward Chelsea Domond, who received a long pass across the right side of the field and put a move on her defender to get a clear look at the goal from way outside the box. She rifled a shot across the net that bounded off the left post and past Baeza, coming to rest in the back right of the net.

The Huskies were apparently not yet satisfied with their newfound 4-0 lead, as just a minute later they tacked on another score. McCauley received a line-drive pass from the right side that she met in front of the goal and sent to the left of Baeza, giving the Huskies a 5-0 lead that they held onto for the remainder of the match.

The victory against the Dragons secured the Huskies a trip to the CAA championship tournament, but it was up to their last match of the year to decide what seed they would go in as.

The Phoenix (11-5-2, 5-3-1 CAA) defense initially held the streaking Husky offense at bay, as no team scored in the first half.

However, after an Elon foul, the Huskies had a chance to break the tie on a free kick. McManus lined a shot from just past the 18-yard box into the top right corner of the goal, putting the Huskies up 1-0.

Just four minutes later, McManus found herself at the center of attention again. She received a pass off a corner kick at the top of the box, got around her defender and delivered another line-drive shot, this time to the top left corner for her second goal of the game.

Later on, Domond picked up another NU goal on a misplay by the Elon defense. Domond shot up the left side, beat her defender and sent the ball into a pile of Phoenix defenders in front of the net. The ball hit the legs of a few players before eventually rolling into the right side of the goal, giving the Huskies a 3-0 lead.

Sophomore midfielder Ashley Reuter joined in on the goal party with eight minutes to play on a corner kick pass that she lined into the top left corner of the goal, much like McManus had earlier in the half. The goal locked up the dominant 4-0 win for the Huskies.

With two wins at the end of the season, the Huskies are now the number four seed in the CAA tournament. They face the fifth-seeded Phoenix Friday in the quarterfinals.