Alina Mueller: Skating from the Olympics to Northeastern University 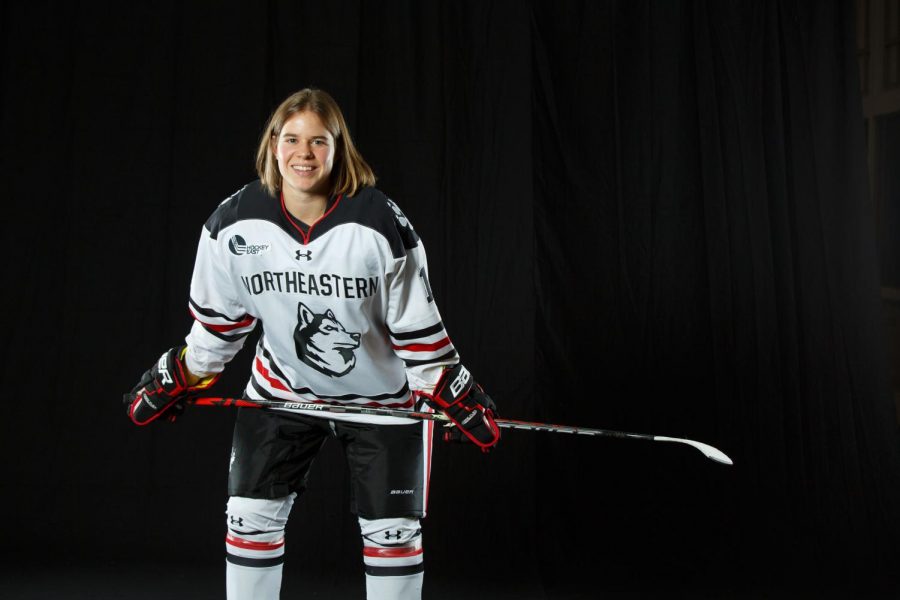 Alina Mueller, a two-time Olympian and star of the Northeastern women's hockey team, has 15 points through the first six games of the season.

A two-time Olympian — who was the youngest medalist in the 2014 Sochi Olympics and deemed “Best Forward” in 2018 at PyeongChang — currently walks the halls of Northeastern University as a sophomore, taking on the next hockey season. Alina Mueller, a 21-year-old native of Winterthur, Switzerland, has established herself as a notable playmaker in women’s hockey.

From playing for the Swiss national team to last year’s season as a Husky, she has racked up numerous awards and honors, including CCM/AHCA Second Team All-American and a Top-10 finalist for the Patty Kazmaier Memorial Award, granted to the best female college hockey player in the country. However, above all her individual accomplishments, she values the team dynamics of the sport as well as the physical and mental skills that hockey entails.

By the winter leading up to the 2014 Olympics in Sochi, Russia, Mueller had successfully made the Swiss national team, which changed the course of her life as she developed fame and recognition on a global level. While she had her own concerns about her eligibility to play due to her age, she thrived throughout the tournament as a 15-year-old, helping Switzerland win a bronze medal.

“It was unreal,” Mueller said.

Four years later, the hockey star returned to the Olympics in PyeongChang, where the Olympic Athletes from Russia defeated Switzerland in the quarterfinals. Despite the team’s loss, Mueller sees a brighter side of the situation, recognizing how her growth and maturity allowed her to make her second Olympic endeavor even more memorable.

“Of course, it was disappointing after the quarterfinal loss,” she said. “However, the whole experience was actually even nicer because I was older and could soak it all in.”

Prior to her experiences as an Olympian, Mueller played for EHC Winterthur’s youth team in Switzerland for 10 years, since the age of 6. Coming from a “sporty” family, Mueller said she tried many sports, yet the sight of kids practicing in the rink sparked her interest and ultimately, her career. Soon after her time with EHC, she joined the professional league as a member of the Zürcher Schlittschuh Club Lions in Zürich, Switzerland.

Despite having played with older teammates throughout most of her career, Mueller has never felt intimidated by the age and experience of others around her. Always positively engaging with her teammates, she continually strengthens her bonds and seizes every opportunity to learn from them.

“Hockey players are so uncomplicated,” she said. “They always want to help you. It was never the case that I felt like not part of the team.”

Following her 2014 Olympic debut, Northeastern showed great interest in her for their women’s hockey team. Mueller, having multiple college offers, chose to come to the Boston school, partly due to the fact that two of her former Swiss teammates, Florence Schelling and Julia Marty, played for Northeastern years ago and shared their love of their experiences with her. On top of their encouragement, Mueller was impressed by the athletics staff as well as the resources and opportunities that Northeastern offered.

“Here, we get all the hockey gear, we’re able to use all the resources, we have nice practice times, and that’s something you don’t have in Switzerland. That’s why I came here,” she said.. “To be here is the biggest thing I can have and the nicest thing for me as a woman to play hockey. It’s unreal for a Swiss hockey player.”

“The way she carries herself is pretty infectious within our team,” he said. He also highlighted her outgoing and energetic personality, which is exhibited in practices and games.

Mueller credits Roger Federer, a renowned Swiss tennis player ranked top three globally in men’s singles, as her inspiration for the athlete she aspires to become. Believing he is the “greatest tennis player of all time,” she admires both his talent and modesty as he developed his skills and established worldwide recognition.

“It’s just really crazy how he stayed the same person since he grew up and he won everything,” she said. “He’s not cocky at all. He respects everyone. If you’re Swiss, he’s the guy you admire, and that’s the case for me. For Swiss hockey, I want to become like him.”

In addition to her role as a star forward for the Huskies, Mueller aims to grow as a leader within the team through actions rather than words.

“English is not my first language, and it’s not the easiest to talk in front of the team, to be a leader by speaking with words, but I try to be a leader with how I behave on and off the ice,” she said. “I just want to be a role model in the way how I love the game and how I play the game.”

Flint also recognizes her current role as a leader, despite her sophomore status, as he understands the amount of experience and knowledge that she brings to the team.

“I don’t know if she realizes it — she doesn’t have a letter and she’s not a captain — but she does have a leadership role, ” he said. “Right now, she’s more of a lead-by-example type, but I think she’s going to transition into becoming more of a vocal leader as she gets older.”

Both inside and outside the rink, Mueller aspires to meet as many people as possible and build connections, always aiming to learn something new. With a roster full of players from across the world, Northeastern’s hockey team has a diverse group of women hailing from many different backgrounds, yet they are all unified in their passion for hockey.

“It doesn’t matter where you come from or what language you speak,” she said. “We all speak the language of hockey.”