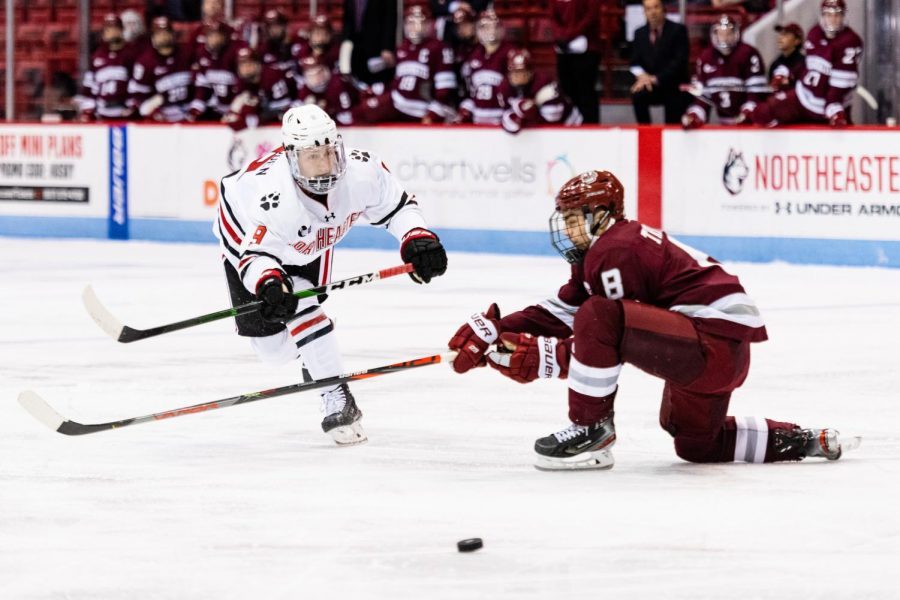 Through six games this season, Northeastern men’s hockey made a habit of starting games poorly, but ultimately succeeding by the tail end. The Huskies started the season 4-1-1 but averaged just 6.66 shots in first periods.

Friday night, the opposite happened: NU started tremendously, jumping out to a 2-0 lead over No. 3 UMass Amherst and leading the first period in shots, 13-7, only to be trounced in the second period and beyond. The Minutemen avenged an Oct. 15 loss to NU and skated out of Boston with a 6-3 victory to further elevate their status as Hockey East favorites.

“A good first period for us, I thought we had good energy and we were playing to our identity,” said NU head coach Jim Madigan. “We had a decent push in the third … you’ve got to play in this league, every night you’ve got to come to play. Every shift, every puck’s important. As a group, we’re still trying to understand that.”

Northeastern opened the scoring with a pair of quick goals in the first 10 minutes from senior forwards Brendan van Riemsdyk and Grant Jozefek, but a precursor to UMass’ second-period onslaught came with just under four minutes left in the opening frame. Freshman defender Tyler Spott, playing Friday as NU’s extra skater, had the puck stolen off him at center ice by UMass sophomore winger Bobby Trivigno. Trivigno skated in on a breakaway, deked and roofed a backhand on NU senior goalie Craig Pantano to bring the Minutemen out of a downward spiral.

That spiral took a pronounced change of direction as the first period wound down and the second period opened. UMass had the better of the play in the last minutes of the first, and NU sophomore defender Julian Kislin took a penalty with just five seconds left. To make matters worse, freshman defender Jeremie Bucheler went to the box just 15 seconds into the second period, giving UMass a lengthy 5-on-3 advantage. Thirty-four seconds after that, UMass junior winger John Leonard finished off a clinical passing play from D-man Zac Jones, and the game was even.

Unbeknownst to the 1,000-plus in attendance, this was only the beginning of an avalanche of second-period problems for Northeastern.

At 5:26 of the second, UMass freshman defender Matthew Kessel sent a snap shot through a screen and past Pantano to give his team its first lead. At 13:39, junior winger Mitchell Chaffee capitalized on a defensive breakdown in the Huskies’ zone, eventually tapping in a loose puck in the crease. At 15:53, freshman winger Reed Lebster scored on a nice tip-in on the rush off a feed from freshman defender Gianfranco Cassaro.

The damage in the middle period: A 4-0 swing on the scoreboard, 13-4 in the shot column, and an embarrassing 20 minutes against a team NU will have to overcome if it is to repeat in Hockey East.

He said his team played “prevent defense,” which Madigan also said was the reason NU was able to run up some shots in the third.

Freshman forward TJ Walsh gave NU a little life in the third with a gorgeous finish for his first collegiate goal at 3:29. NU amazingly outshot UMass 13-3 in the final frame, but not many of them were of high quality and the damage from the second period was far too great to overcome. Leonard scored his second of the game into an empty net to seal it.

The Huskies don’t have much time to regroup. The two teams will reconvene Saturday night in Amherst for the rubber match of this regular season series at 8 p.m.

“For this young group, that was a statement game for us,” Carvel said. “But it will only be if we follow up tomorrow night.”

“We’ve got to understand that you’ve got to play with urgency all the time,” he said. “We’ve got to be a lot better. It’s a different game up there [in Amherst on the bigger rink]. But that’s not an excuse. Competing every shift is not determined by rink size, it’s your will.”

Madigan gave Freshman goalie Connor Murphy some playing time in the third period, but said it was just to give Pantano a break from the tough conditions created by his defense. When asked if he will mix in a start for a non-Pantano goalie soon, he said “we will discuss that tomorrow.”