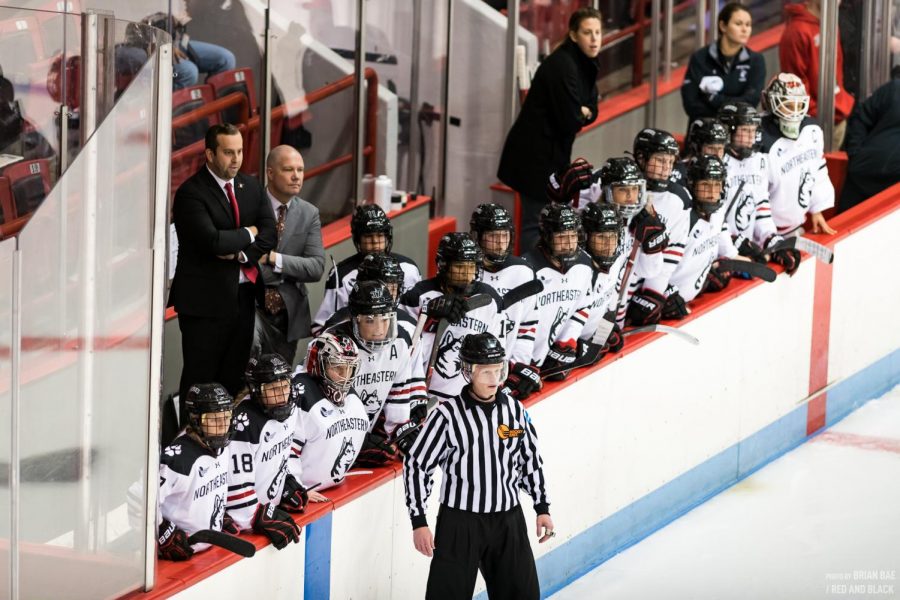 Members of the Northeastern women's hockey team watch as their teammates play a game against Colgate last season.

For the second day in a row, the high-flying Northeastern women’s hockey team bested Boston University to move to a strong 7-1-0 on the season, limiting the Terriers to just one goal in two games.

In the low-scoring contest, the Huskies came out on top off the back of a shutout from junior goalie Aerin Frankel and strong puck possession in the second and third periods. While the shot totals didn’t differ much, the Huskies’ scoring chances were consistently more difficult for the Terriers (5-3-1) to stop.

“I thought we played pretty well for 60 minutes. They’re a tough team to play, really good defensively,” said NU head coach Dave Flint. “We’ve been having a little trouble scoring goals, so I like the way that we grinded it out and found a way to get some pucks to the net. Even more importantly, we were solid defensively, to only give up one goal over two games to that team is really impressive.”

Frankel’s brilliant work in net and strong defensive play from the Husky skaters was consistent throughout the home-and-home, giving the Huskies an all-important two Hockey East victories over their crosstown rival.

“Obviously, they’re a really good team. They’re top ten in the country as well, and we always know it’s going to be a really tough battle.” said Frankel. “It is a Boston rivalry and we know we have to bring our best, or we aren’t going to be happy with the result.”

The first period set the precedent for the rest of the contest, as both sides prevented many pucks from reaching their netminders. Frankel was sharp when she needed to be, turning away all nine BU shots on goal while her skaters helped collect any rebounds she didn’t corral herself.

It looked as if neither team would break through before the first intermission, as each time the Huskies seemed poised to get a good scoring opportunity, a BU defender would come up with a cut pass or stick lift. However, with just five minutes left in the first, the Huskies finally managed to break through.

Junior blueliner Skylar Fontaine found freshman defender Megan Carter near the point, who sent a shot into a mess of players right in front of the net. Fortunately, the puck found the stick of junior forward Tessa Ward, who tipped the shot past BU’s netminder Corrine Schroeder to give the Huskies the 1-0 lead they’d carry into the second. The goal was Ward’s first of the season.

While the first period was more of an even scrap, the Huskies completely took over in the second. NU only outshot the Terriers nine to six, but the Terriers failed to generate anything particularly dangerous for Frankel to handle.

“We played with more urgency in our own end, which we didn’t do against Providence last weekend,” Flint said. “We were doing a better job at protecting the front of the net and making smart plays, not turning the puck over in bad areas. First period we were a little bit sloppy in that area, but we got corrected and were better down the stretch.”

The Huskies kept the puck in BU’s zone for much of the second, keeping constant pressure on Schroeder and her defenders. In the fifth minute, that pressure paid off in the form of a Veronika Pettey goal, to give the Huskies a 2-0 margin.

Pettey was assisted by senior forward Matti Hartman, who found Pettey positioned in the slot. Hartman managed to get the puck behind BU’s net, and a crisp pass to Pettey generated a beautiful one-timer that Schroeder had no chance to stop.

The Huskies’ strong play continued in the third, as they limited the Terriers ability to score with suffocating defense and strong puck possession. The Huskies continued to mount pressure in the Terriers’ zone, as Schroeder had to make a handful of tough saves to keep the Huskies from adding anything else to the scoreboard.

“Obviously, I respect their goalie a ton, she has been really good the past two years,” Frankel said. “We’re both juniors and I think we have a little bit of competition between us, but at the end of the day, she played well as well, so credit to her.”

With just over two minutes remaining, Frankel was able to keep her shutout alive with a few tough saves as the Terriers emptied their net to try to climb back into the game. The Terriers were able to test her multiple times throughout their self-made man-advantage, but an impressive glove save and a few tricky pad saves blanked the visitors.

The Huskies will stay at home for their next contest, as they face off against Holy Cross (0-7-3) at home Friday afternoon.