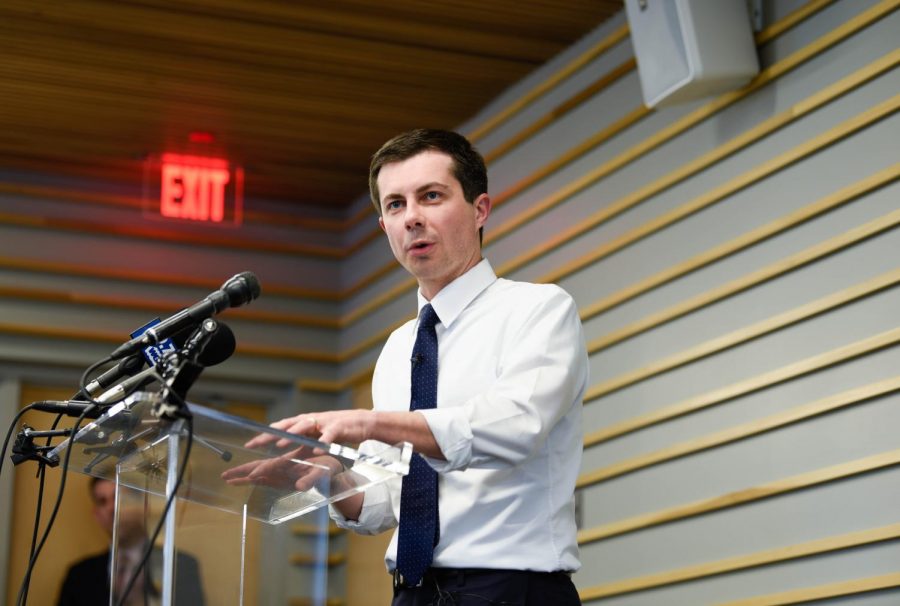 Pete Buttigieg made a stop at the Emerson Colonial Theatre in Boston on Oct. 29.

Democratic Presidential candidate Pete Buttigieg held a grassroots fundraising event at Emerson Colonial Theatre in Boston on Oct. 29. He answered questions from the audience ranging from climate change to Halloween costumes for his dogs.

Buttigieg, the mayor of South Bend, Indiana, began the event by discussing American values, explaining that to move forward as a nation, we need to embrace unity rather than division.

“I’m thinking about values like love of country, but not the cheap nationalism that hugs the American flag, sometimes literally, or throws a military parade in order to prove something,” Buttigieg said. “I’m talking about real patriotism in an inclusive fashion, I’m talking about love of country that recognizes that our country is made of people, and you cannot love your country if you hate half the people that are in it.”

The fundraiser drew supporters and undecided voters, all hoping to gain perspective on what he has to offer in his campaign for the presidency.

“Well, from what I know of [Buttigieg] I like his policies,” said Jenna Squasoni, a freshman at Simmons University. “It’s going to be my first time voting next year, which is exciting, but I really liked the plans he had in place for LGBTQ [people]. He just seems like an all-around sweetheart and I wanted to learn more about him.”

Some attendees, like Dan O’Neill, wanted to learn about what makes Buttigieg different from the other candidates.

“[Buttigieg is] in the top three candidate zone [for me] right now … I would like to hear his vision, how it’s different from the other dozen or so candidates that are running and why he feels it’s going to be compelling to a large portion of the electorate,” O’Neill said.

Supporter Chris Trapper said Buttigieg is his top choice due to his electability, and believes he is the only one who can defeat President Donald J. Trump and win the general election.

“[Buttigieg] seems [to be] the most capable and most able to decode the Trump mystique, because lots of people couldn’t beat Trump, but I think Pete is smart enough, and he has enough integrity to walk through [Trump] intellectually,” Trapper said. “I think it would also be good to have a younger person on stage to make Trump look like the artifact he is.”

Massachusetts State Rep. Maria Robinson read audience questions to Buttigieg regarding his policies on an array of topics including the country’s infrastructure, gun violence and the opioid epidemic. When asked specifically about climate change, Buttigieg said the country needs to band together to fight the crisis as if it were a “national project.”

“The time has arrived for us, in fact it is long past time, to treat climate change and climate disruption as the global security threat of our time and mobilize to do something about it together,” Buttigieg said.

Buttigieg, a married gay man, was also asked about LGBTQ+ rights. He explained that the fight toward equality is not over even after the achievement of marriage equality. He said there is still work to be done, including passing a Federal Equality Act to expand protections under the Civil Rights Act, and addressing violence against transgender women of color.

“If you could’ve told me, when I was just a little ways up the river, trying to figure out who I was, that 15 years later I could be standing here, married and a serious candidate for the American presidency, I would not have believed you.” Buttigieg said. “We have administrative work to do, we [have] legislative work to do, and we have a little cultural work to do as well.”

A common theme of the night was the idea of unity and belonging. Buttigieg focused on moving forward once President Trump’s term comes to an end.

“We have to knit together people in this nation that have nothing in common besides the fact that they belong to the same United States of America, and establishing that sense of unity is what the presidency is for,” Buttigieg said. “The purpose of the presidency is not the glorification of the president, [it] is about the unification and the empowerment of the American people.”