Rabbits and cats and dogs, oh my: Life on campus with a support animal 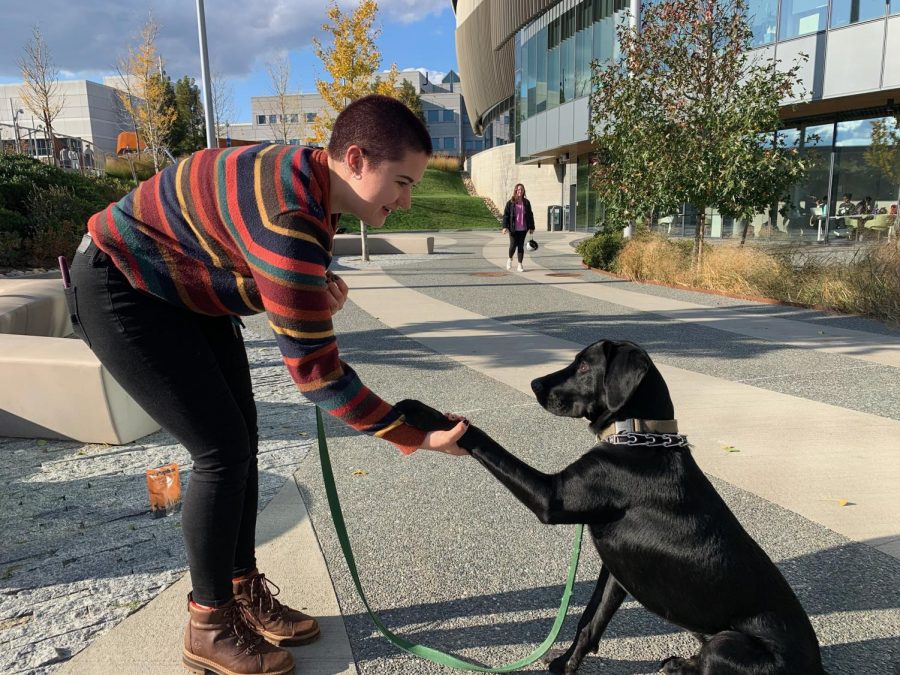 Amy Hayward and her dog Forrest play outside of ISEC.

Spend some time on campus and you’ll discover that Northeastern’s residence halls are home not only to students, but also to a community of pets who blend into the hustle and bustle of campus life and are an integral part of their owners’ lives.

The Disability Resource Center, or DRC, allows students to request an emotional support animal as an accommodation to live with them in a residence hall. For an animal to be approved, the DRC requires the animal’s veterinary records as well as documentation from the student’s therapist.

After the animal has been approved, students must sign an agreement detailing regulations and conditions of the animal’s stay. The owner’s roommates must also agree to the animal’s presence.

For Izzy Dodd, a second-year nursing major, the process of getting permission for Juno, her 8-month-old English Angora rabbit, to be on campus was challenging. After submitting the request twice, she made a number of phone calls and wrote multiple letters before Juno was finally able to join her.

Dodd said she thinks the DRC could be more flexible in granting support animal approvals, especially in cases like hers where Juno mostly stays in a cage in her room in Davenport B.

“It just kind of seemed like a little bit over the top for what I was asking for. And I think it would help anyone, really, at school to have an animal just like at home,” she said.

Dodd said that adjusting to campus life after returning from N.U.in Greece and dealing with an intense major was difficult for her.

“But then, I got a bunny and it helped a lot with staying on campus and making a home here instead of going back to my home all the time,” Dodd said.

Jasper Duval, a first-year health science and sociology combined major, said his 5-year-old tuxedo cat, Ollie (@oliver.boliver.butt on Instagram), has helped him in a similar way.

“He is kind of one of the things keeping me grounded and making Northeastern feel like home for me,” said Duval.

Cameron Perry, a third-year computer science and game design combined major, said taking care of her 3-year-old black cat Boba has helped her relieve stress by getting her active and doing things throughout the day. “He’s been a good thing to have,” Perry said.

Duval expressed a similar sentiment and said getting up to feed and take care of Ollie helps him get his day started. “He’s a big motivator for me,” Duval said.

For many roommates of emotional support animal owners, the animals are a welcome addition to their living spaces.

Dodd said she brought Juno to school not only for personal benefit, but to be a “communal pet.” She said her roommates came to Northeastern from far away and miss their own pets, so Juno provides a piece of home for them as well.

Amy Hayward, a second-year American Sign Language major who lives off-campus, said one of her roommates “is a blessing” because of how she has helped her take care of 8-month-old Labrador mix Forrest this year.

“She loves him. She treats Forrest as if Forrest was her dog,” Hayward said about her roommate.

These animals have also created a sense of community for their owners and have opened them up to social opportunities.

Duval said people enjoy stopping by his room to visit Ollie. “That’s created some pretty good relations with people in my hall,” he said.

Hayward said Forrest has helped connect her with strangers as well as other dog owners from nearby colleges like Berklee College of Music. She is also part of a group chat called “The Dog Moms of Northeastern,” where 20 to 30 dog owners coordinate play sessions for their pups.

“I’m constantly talking to people and people always approach me and ask questions or I see their eager faces and I’m like, ‘Yes, you can pet him, go ahead,’” Hayward said.

Dodd frequently brings Juno around campus in a stroller as a way to share the joy Juno gives her with others. “I’ll bring her to ISEC and she’ll snuggle with people.”

Though beneficial, living with a pet entails some difficulties. Aside from the olfactory issues  — Dodd mentioned a pervading, farm-like hay scent in her room, while Duval noted occasional litter box odors in his — having a pet can limit owners’ freedom and ability to stay out for extended periods of time.

Hayward said she can no longer stay on campus to study for long sessions during the day, but instead has to take breaks to come home and walk Forrest. However, she said this responsibility has been beneficial for her.

“It’s better for my mental health to take breaks,” she said.

Hayward also mentioned a challenge in the fact that Forrest is still young and in the process of training. She is currently teaching him commands in ASL: So far, he knows how to sit, lay down, stay, come and “boop his nose” on Hayward’s finger.

When she takes Forrest out in public, Hayward said she finds many people have expectations for how well-behaved he should be. Hayward said “he’s not perfect” and will sometimes bark or “get a little rowdy,” which can scare other people.

She has even encountered instances of people crossing the street to avoid Forrest or waiting for the next elevator, not wanting to be in an enclosed space with him.

Hayward reacts well to these encounters. “I’m trying to be respectful of other people’s fears and curiosity,” she said.

Despite the difficulties that come with having a pet, these animals unconditionally love and support their owners, perhaps the biggest benefit they provide.

“If I look like garbage, if I feel like garbage, I know Forrest is going to be there to support me and to love me, no matter what the circumstances are,” Hayward said.