After long road to recovery, Adams makes her mark on NU women’s soccer 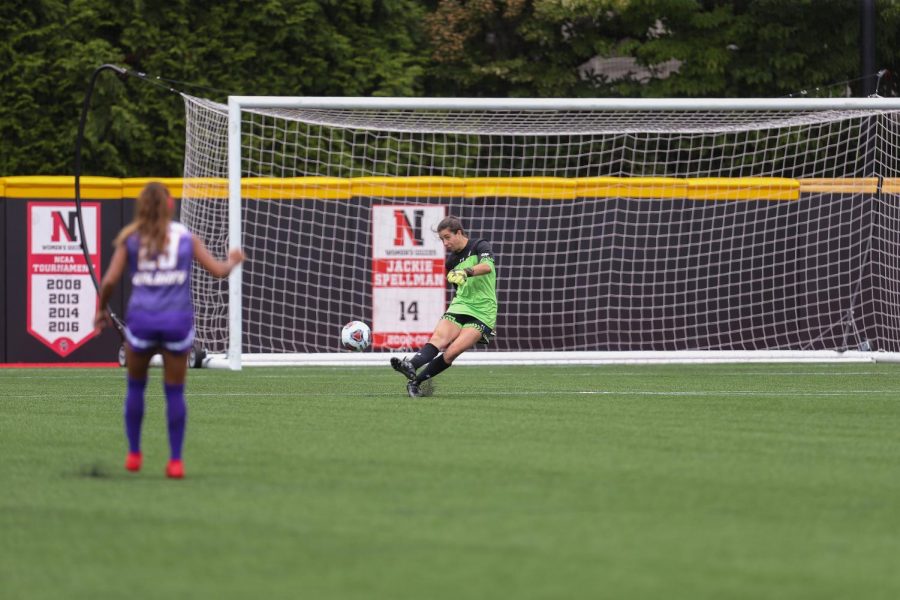 Women's soccer goalkeeper Megan Adams kicks the ball away from her goal in a game earlier this season.

Described as the “ultimate team player” by NU women’s soccer head coach Ashley Phillips, Northeastern’s women’s soccer goalie Megan Adams had to endure three years of severe head trauma symptoms before she could lay her feet, and her devotion to her team, back on the field.

Growing up in Franklin, Massachusetts, Adams can’t remember a time that she wasn’t involved in sports. From 3 years old, her parents placed her in several sports as a way of creating character and passing time, as many parents do. But for the Disney and Patriots fan, soccer stuck with her through it all.

“I played soccer from 3 years old. [I played] basketball in fifth grade, I played a year of Pop Warner tackle football, I did karate for four years and got my black belt. I got kicked out of lacrosse camp because there wasn’t enough contact,” she said laughing.

Adams’ relationship with Phillips goes all the way back to the goalie’s eighth-grade season, where she was thrown between the pipes for the first time — by chance. For most of her training, Adams was a field player, where she usually played in the midfield or as a forward. But her team’s goalkeeper got injured. Phillips recalled the team’s coaches “thought [she] had more potential to compete at a high level as a goalkeeper.” And although Adams explained that switching to a different position at that age is fairly late for most players, she has remained in goal since.

Phillips sees herself as a mentor to Adams, as Adams was one of the first goalkeepers she trained before joining the Northeastern University staff. To this day, Phillips, who is going on her 10th year of working with the Northeastern women’s soccer team, still sees the selfless character Adams expressed the day she switched to goalkeeping through her devotion to being a team player.

“She was basically told that was the best way that she would help the team, and knowing that she changed her position, which was kind of a selfless act, to help a team be successful. Especially when you don’t know anything about it. She never played the position [before],” Phillips said. “That was just the start of what showed Megan’s character, which is extremely high.”

When asked about the main difference between being a field player and a goalkeeper, Adams said the greatest advantage about goalkeeping is having more opportunities to contribute to the team’s success.

“You’re more in a spotlight in goal, which can be a lot of pressure. Your teammates are always trying to protect you and you have a say. You always have the ability to stop a potential goal, and you’re always in a defensive play,” she said. “I always have the chance to do something for my team.”

By the time she reached her freshman year of high school, Adams found herself driving for about an hour and a half to and from club soccer practice five times a week. While she was committed to the sport, Adams was even more devoted to being part of a team.

“One of the main things I love about playing is being part of a team dynamic,” Adams said. “There’s a love for the sport, and there’s a love for working out together and getting better. But there’s also that social bond you make with people. That has always been very important to me.”

But toward the end of high school, her way of life was flipped over completely. In the summer before her junior year of high school, Adams experienced two injuries. In June 2015, Adams’ face was met by a cleat in the middle of a game, and she ended up having to get stitches. In hindsight, she believes she may have sustained a concussion in the incident.

In the following September, while sprinting in the middle of a match, Adams was tripped, the side of her head hitting the girl’s knee in the midst of her fall. At first she didn’t feel any symptoms and completed the game, as well as several others over the few days that followed the injury.

Soon enough, Adams started experiencing concussion symptoms and sought out medical attention. Once diagnosed, Adams’ soccer career went on a three-year hiatus. By the time she arrived at Northeastern, she had tried several treatments, including acupuncture, various types of physical therapy and VASPER, which Adams said was a horrible experience.

“At that point I was two years into it, and I had almost forgotten what it feels like to feel normal,” Adams said. “I had headaches all the time, I’d bend over and [feel] dizzy, and things felt out of whack. It wasn’t until I got to Northeastern my freshman year that I actually started to feel better.”

For the majority of her freshman year, Adams was not allowed to train or play on the team. However, Phillips remembers that despite her uncertain athletic future, Adams consistently found ways to contribute to the team’s success.

“She was the first kid to cleanup at practice. She was the first kid to fill up water bottles, or run them onto the field when we’re doing fitness tests. She found any way to help out the group when she probably wasn’t very happy with the situation she was in, which shows she’s a very team oriented, selfless human in general. I think that’s one of the biggest things that our staff but also her teammates really respect about her,” Phillips said.

As time went on, and the Northeastern Athletics medical staff continued to help Adams heal and regain strength, she jumped at the opportunity to get back into shape with each clearance she received. When told she could work out again, she worked out every day. When told she could play non-contact, she begged Phillips to put her in training sessions.

And though neither Phillips or Adams knew if the day would come, by the end of the spring semester of her freshman year, with the help of the Northeastern sports medical staff, Adams was given a full-go clearance. Immediately after being cleared, she consistently asked her coaches to be thrown onto the field during a spring game. From then on, Adams has not only been a consistent team player off the field, but on the field too.

Another consistent player on Adams’ team is her mother, Lori Adams. Since Adams’ parents got a divorce when she was young, her mother was more involved in raising her. Like her daughter, she devoted a majority of her time and money to soccer.

“She’s done everything to give me every opportunity to play,” Adams said. From paying for club soccer and joining Adams on her travels to meet with college recruiters, Lori has been involved every step of the way, and hasn’t let anything change that since her daughter started college.

“My mom was at every game this season, which includes flying down to North Carolina, flying to Florida,” Adams said. “That has always been something special between the two of us. We’ve always both cared, and she’s always been beyond supportive.”

Even while Adams wasn’t allowed to play during her freshman year, her mom attended most of the games just to support the team, even with no assurance that her daughter would be cleared any time soon.

While injured, Adams felt as if she was spiraling because so much in her life had changed. But it’s what she experienced that has given her a wider perspective of the game, and her life.

“It’s been great that I was still able to be [on the team], which is such a fantastic opportunity, and going through that because now I have a unique perspective on things and know to be grateful for the time on the field because you really don’t know what is going to happen,” she said. “Nobody ever expected I’d be out for three years and somehow still came back.”

Now going on her third year at Northeastern as a criminal justice major, Adams recognizes one of her greatest accomplishments as simply being here.

“Playing here in general and being part of this program is an accomplishment, to me,” she said. “It feels like an accomplishment to be a Division I athlete. This is something so many kids dream of and never get that opportunity — whether they don’t have the talent, [or] they didn’t have the resources like the support my mom gave me.”

She is already looking forward to her next season. For her and her team to be successful and play in the NCAA Tournament, she knows that the work needs to start now, and there’s no doubt that she’ll continue to build up her team in any way she can.

“That’s probably been the biggest growth in the department, she wants to contribute to the success of the team, not just be on the team,” Phillips said. “This year, we really saw that. She wanted to be a part of our ability to win, not just be a part of the camaraderie.”