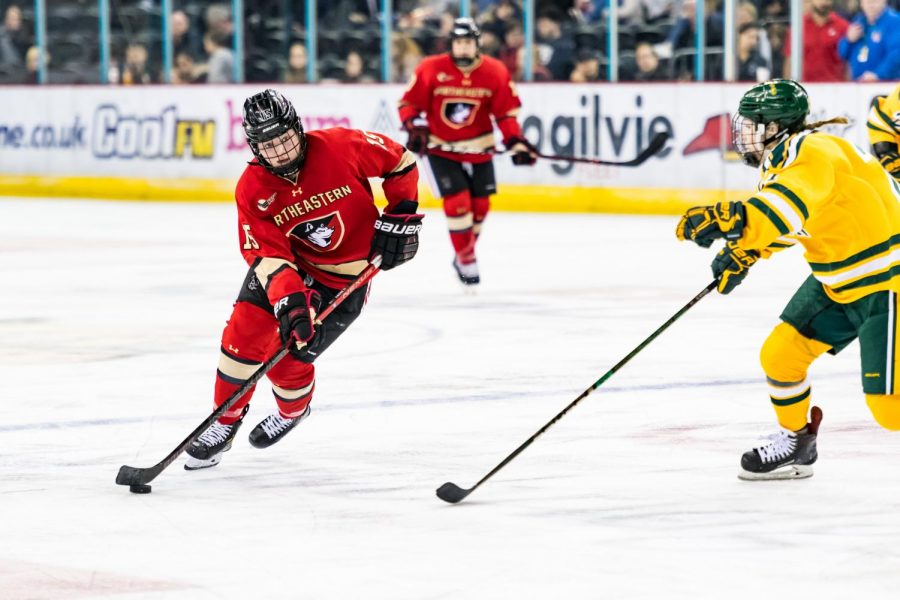 In the five games leading up to Friday, the Huskies (8-1-0) had allowed just four goals, while the Crusaders (0-9-3) had been shut out in back-to-back contests. While head coach Dave Flint and his team surely weren’t taking the opponent lightly in a conference matchup, Friday afternoon had all the signs of being a game that Northeastern would completely dominate.

After falling to Holy Cross once last year and giving them their only Hockey East victory of the season, NU got started on revenge early. The Huskies kicked off the afternoon tilt with a goal from sophomore forward Alina Mueller, who cashed in from the inner half of the left-side faceoff circle. Fellow sophomore forward Chloe Aurard made a tough pass through traffic from behind the net to set up Mueller’s from-the-knee one-timer goal as the Huskies showed their toughness and skill on the scoreboard at the ninth minute.

The Huskies kept the heat on the Crusaders, and just under five minutes later, the score was kicked up to 2-0 in favor of the home squad. On the power play, Mueller found junior blueliner Skylar Fontaine at the edge of the Crusaders’ zone. Fontaine skated towards the middle and ripped a blazing shot on net, where Mia Brown was obstructing the view of the Holy Cross netminder. Brown was credited with a secondary assist for her initial pass to Mueller, but her net-front presence was deserving of a point too.

The two-goal lead the Huskies entered the first intermission with did little to represent the pure domination they exhibited in the period. The ice appeared tilted, as NU outshot the Crusaders enough to generate a ridiculous 26-2 shot margin in the first. Holy Cross sophomore goalie Jada Brenon worked hard to keep the visitors in the game, but none of her skaters could accomplish anything in the face of NU’s stout defensive play.

The second period was simply more of the same for the Huskies. Despite the Crusaders managing a slightly more respectable 10-17 shot margin, NU still kept them off the board.

Early in the second, the Huskies scored again. This time, freshman forward Jess Schryver beat Brenon from right outside the crease off a rebound from senior forward Matti Hartman’s initial shot. Junior forward Veronika Pettey and Hartman both earned assists on the tally.

As the second period was about to conclude, Aurard joined the goal parade with her sixth marker of the season. With just 37 seconds left, she found her own rebound behind the pad of Brenon and sent it into the twine for her second point of the contest. Freshman defender Megan Carter and Mueller both earned points for assists on the late-period score.

Heading into the third, Holy Cross head coach Katie Lachapelle decided to give Brenon the rest of the afternoon off. Brenon finished with a statline that looked like a full three periods, as she turned away a whopping 39 shots while surrendering four goals in her 40 minutes of ice time.

NU’s Tessa Ward gave Holy Cross junior goalie Julia Pelletier a rude welcome to the game, as just three minutes into the third, the junior forward connected for her second redirect goal of the season. Sophomore blueliner Gillian Foote sent a strong shot on net, where Ward and her stick were waiting to deflect the shot past Pelletier and give NU a commanding 5-0 lead.

Ward scored again as the game wound down, giving her three goals in the past two contests after being held goalless in NU’s first seven games.

The Huskies have now won three straight and will look to make it four against UNH (5-4-2) in the first game of a home-and-home next Friday at Matthews.