Roland breaks Northeastern record with 42 points in win against Harvard 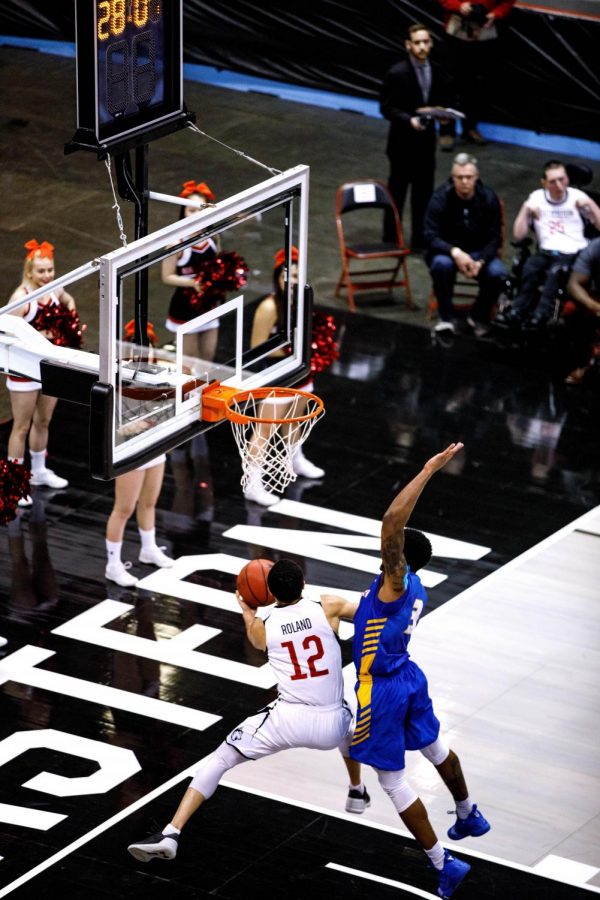 Jordan Roland once again stole the show for Northeastern Friday night, as the senior guard scored 42 points, a new program single-game record, to lead NU to a 84-79 win over Harvard in its home opener.

“Jordan had an unbelievable game,” NU head coach Bill Coen said. “He set the tone coming out of the box.”

Another top player in the game was freshman guard Tyson Walker, who scored 15 points and had five rebounds.

Within the first three minutes of the game, Roland hit three 3-pointers, setting the tone for his night.

In the first half Harvard did not put up much of a fight, which allowed the Huskies to connect on multiple 3-pointers.

Walker threw up two back-to-back 3-pointers to make the score 40-25. Both senior guard Bolden Brace and junior forward Shaquille Walters also scored 3-pointers during the half.

The Huskies maintained a comfortable lead during the first half and went into the break ahead  44-27.

Walker started the second half on fire and shot two 2-pointers in a row. Roland again scored two 3-pointers early on, making the score 56-36.

However, in the second half Harvard started to catch up to the Huskies. Crimson senior forward Chris Lewis led his team with nine rebounds and sophomore guard Noah Kirkwood had 18 points and three assists.

With three minutes left in the game, Roland hit his sixth 3-pointer of the game, bringing his total to 40 on the night.

The game was full of fouls and free throws in the last few minutes of the half. A Northeastern lane violation resulted in two Harvard free throws to make the score 76-72.

Roland made two free throws with one minute left in the game to reach 42 points on the night, a new NU program record. Roland’s mark beat the former record of 41, held by Reggie Lewis and JJ Barea.

In a span of 10 seconds, Walters scored two free throws, followed by two more free throws from Crimson senior guard Christian Juzang. Walker came through with one more free throw to make the score 82-77 with 40 seconds left on the clock.

In the final 20 seconds, Husky junior guard Myles Franklin made two free throws to put the game away, making the final score 84-79.

“Our goals and our standards never change,” Coen said. “[The team] has one thing on their mind and that’s winning the championship. It’s hard to do but once you verbalize it and put it out there, you can hold yourself accountable and hold the team accountable.”

The Huskies (2-0) travel to Amherst this Tuesday to play UMass at 7 p.m.