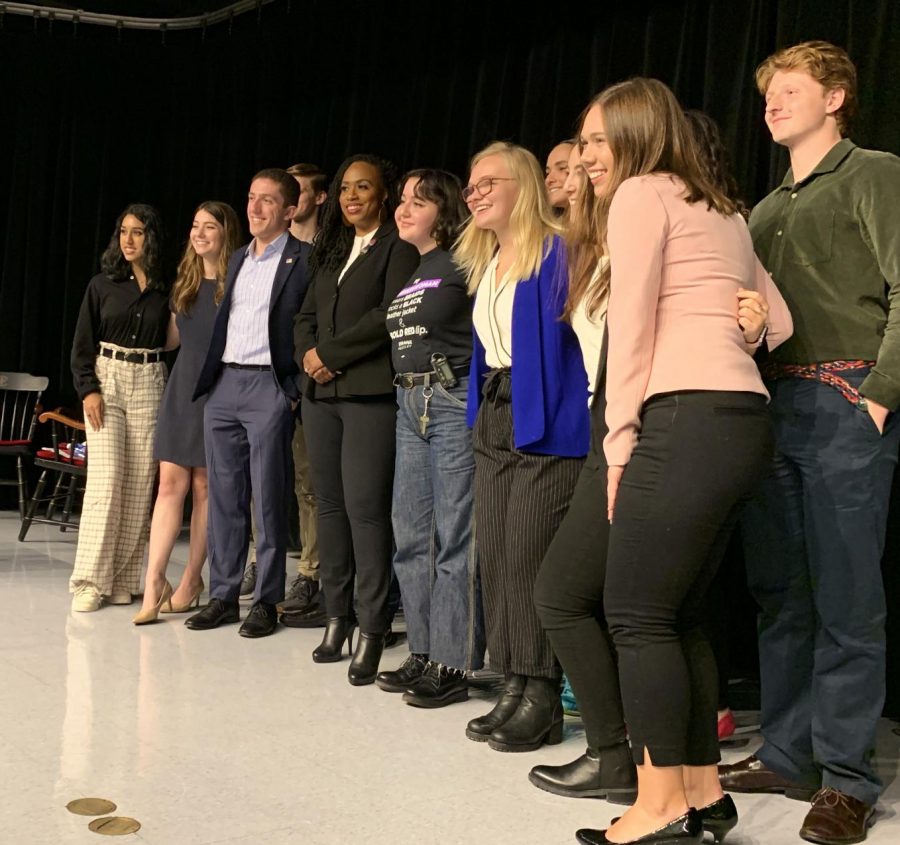 Rep. Ayanna Pressley poses for a photo with organizers and attendees at the BU College Democrats Election Day Forum.

When U.S. Rep. Ayanna Pressley arrived at Boston University from Chicago in 1992, she had no intention of running for Boston City Council or Congress.

“I was not obsessing about title or position,” she said Tuesday, Nov. 5 to a crowd of over 100 students in a town hall event hosted by the Boston University College Democrats at the George Sherman Union Conference Auditorium. “I focused on the impact that I wanted to have on world and I worked backwards.”

Students turned out for the event for varying reasons. Helen Hawkins, a BU third-year international relations major, hoped to hear about Pressley’s time serving on Boston’s City Council. “I’m currently working on the campaign of Michelle Wu, who is running for City Councilor,” Hawkins said, “so I’m trying to hear about her experience when she was on the City Council and try and connect it to my current work.”

Alyssa McLaughlin, a second-year political science major at BU, came to the event to learn more about Pressley’s experience running for office. “As someone interested in running for office myself one day, I’m here to hear about what that process was like for her,” McLaughlin said.

Pressley, who currently represents Massachusetts’ 7th District, emphasized the importance of civic participation and encouraged students to vote in the elections that were held Tuesday.

“[Pressley’s team was] just really eager to come and talk to students about voting and how important it is, especially a year after her victory, definitely a really pressing time to get students engaged,” Szautak said.

Pressley attributes this upset victory to an increase in youth voting in last year’s election. This election saw Pressley rise to beat 20-year incumbent Mike Capuano, a reliably progressive representative. Despite being 13 points down in the polls, Pressley made a comeback and beat Capuano by 17 points on election day. She claimed this was because she and her team grew the student vote by 400% in some areas, including BU.

Pressley also wants to expand voting rights to younger people. “[They] have greater acumen and knowledge about existing legislation, who is serving in the halls of Congress and the Senate, than most people that are eligible to vote right now,” Pressley said.

She also noted that young people are leading “on every existential threat to our country,” from the climate crisis to gun violence prevention. “When it comes to voting rights, I am all about increasing access to the ballot and engaging as many more voices as possible in the name of accountability,” she said.

In the past, Pressley has worked on expanding the breadth of outdated state liquor license laws to ensure equality for minority communities, increasing sexual health education and making condoms available in Boston public high schools and changing the narrative about how to prevent human trafficking, but the representative says lowering the voting age has proved surprisingly contentious.

“I cannot believe that out of all the issues I’ve worked on … one of the most polarizing [issues] that I’ve championed was lowering the federal voting age to 16,” she said.

“This Democratic majority Congress is very capable of walking and chewing gum. We can lead and legislate on those issues of care and concern and consequence to the American people, which we’ve done,” she said. “Those bills are sitting at the door of Mitch McConnell, who won’t do his damn job.”

Pressley also answered questions about President Donald J. Trump’s impeachment probe, an ongoing investigation that began in September 2019 after it was revealed that a CIA whistleblower filed a complaint alleging wrongdoing on the part of the head of state.

“I have been resolved, very soberly so, and supportive of impeachment since April,” she said. “I do believe impeachment is possible. I do believe it is necessary both in the name of our election security, our national security, the preservation of our Democracy, and the legislative hate and hurt that has been caused.”

During her speech, Pressley referred to Trump’s time in Office as “a stain on our history,” and referred to him not as President but as “the occupant of this White House.” The reason for this, Pressley said, is “not because I dishonor the office of the presidency, but because I believe that he does. He is simply occupying space. He does not embody the grace, strategy, the empathy, the intellect of a president.”

In the meantime, Pressley believes she can continue to make a difference from her own district.

The district, Pressly said, is over 50% people of color, 40% foreign born and nearly 40% single female head of household. Furthermore, in a three-mile radius from “Cambridge to Roxbury, life expectancy drops by 30 years, immediate household income by $50,000.”

This diversity, Pressley told the crowd, puts her district in the perfect position to affect change by being innovative and bold.

“If any district in the country should be leading, it should be this one,” Pressley said.