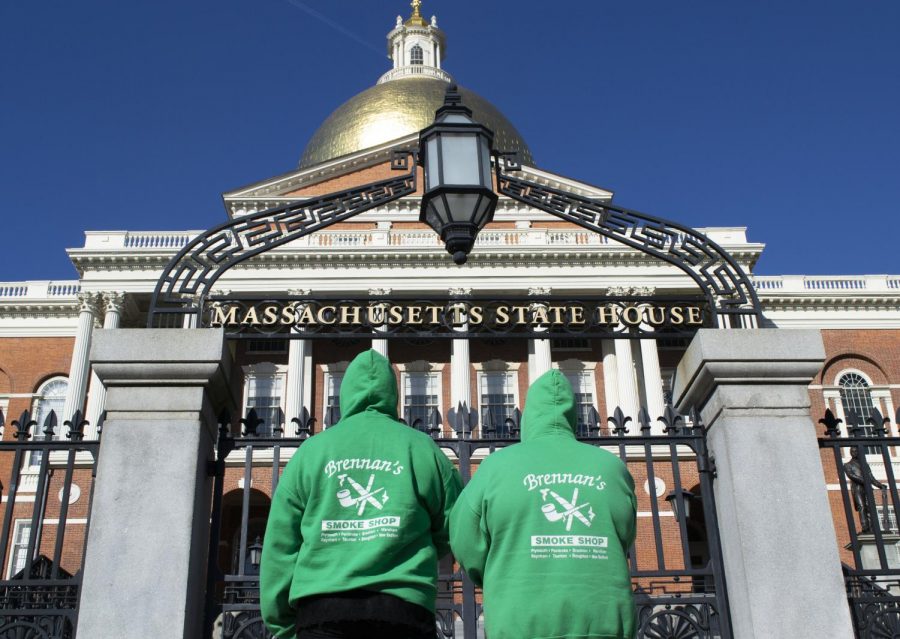 Kristen Brennan and Hannah Magnuson, both employees at Brennan's Smoke Shop, stand in front of the Massachusetts State House in protest of the menthol ban.

The Boston Convenience Store Owners Association (BCSOA) rallied Wednesday, Nov. 6 in front of the Massachusetts State House to protest against the Boston Public Health Commission’s, or BPHC’s, proposed ban of menthol cigarettes. Participants gathered to express their distaste for the recent regulations on vaping and nicotine consumption.

Humayun Morsted, BCSOA’s clerk, wanted the public to know the rally is about more than just revenue.

“It’s about the service we provide to the community. What happens if this [menthol ban] protocol gets into the wrong [hands]? I’ve got children, too. This protocol [will promote] black markets, [and Menthol cigarettes] will be accessible to children’s hands daily,” he said.

Most of the store owners’ families were present, and regardless of whether store owners had children or not, the consensus was that banning menthol cigarettes would exacerbate the public health issue by increasing the presence of black markets.

Morsted was also concerned with the level of secrecy that the government has maintained regarding regulation by the Food and Drug Administration, or FDA, which never authorized e-cigarettes. He thinks that the “FDA has to get their hands on this [issue surrounding e-cigarette regulation].” Otherwise, states, such as Massachusetts, will only “use the vaping ban as an excuse to ban the sale of menthol cigarettes.”

This reasoning is what drove protesters to chant, “Stop the ban.”

Jeff Cruz, owner of Four Brothers Market in Roslindale, expressed his frustration on how the ban will impact young adults.

“[Teenagers] don’t buy vapes and cigarettes from convenience stores or retails, but from their friends,” Cruz said at the rally. “[The government] banned Juuls, now there’s an illicit market [selling them]. You can go on Snapchat and search ‘hashtag Boston Juuls’ and you’ll find guys selling Juuls for 30 or 40 bucks, but you don’t even know if it’s [authentic] or regulated at all. It’s going to happen with cigarettes.”

BCSOA members, including Morsted and Sheiekh Bahauddin, owner of Convenience Plus on Harrison Avenue, took pride in their “96 percent compliance rate” with checking IDs for the sale of tobacco products. “[Customers] are adults and the ban would only negatively impact convenience stores while [ineffectively controlling] the youth vaping [epidemic],” Bahauddin said. Massachusetts’ compliance rate “is the highest in the country.”

During the rally, BCSOA members voiced their concerns for marginalized and low-income communities, which will be affected by the ban both economically and socially. Most, if not all, BCSOA members started their businesses as a means to maintain their families.

“For years and years, what [the government has been] trying to do is not going to have any impact on youth smoking. All they are doing is hurting the communities. Now, they have a chance to get it right,” said Paresh Patel, independent liquor/gas convenience store owner.

Similarly, Morsted expressed the micro-level impact of the ban on the shop owners’ communities.

“[The government] doesn’t understand how this ban would impact convenience stores. People come in and buy snacks, milk, eggs, and other [household essentials]. Without cigarettes [being available], customers get angry and they won’t come in the stores altogether,” he said.

Besides the ban’s arbitrariness and the condescending nature it has toward marginalized communities, Bahauddin also pointed out inconsistencies behind the legislations.

“We’re not pedaling anything that’s not legal. You as an adult, me as an adult,” he said. You can buy menthol liquor, cherry liquor, so why not ban those? Why don’t [legislations] go there?”

Dr. Michael Siegel, a public health researcher at Boston University, said banning vapes will revert former adult smokers back to cigarettes and is actually harmful to public health. He believes that the ban will also harm the youth.

“A ban on menthol e-cigarettes will simply cause youth to switch to vaping THC cartridges. Youth will vape whatever is available. If it’s not flavored e-liquids then it will be black market THC vape carts. These are exactly the products causing the respiratory disease outbreak. For this reason, I think a flavor ban will have devastating public health consequences,” he said.

Cruz said that he often found marginalized communities to be predisposed to menthol cigarettes. However, he doesn’t focus on race when serving his customers.

“[These convenience stores] rely on the local community to survive,” Cruz said. “I don’t [judge people] by the color of their skin. I recognize the person and say, ‘Are you going to grab [whatever they regularly needed]?’ And boom, I give them what they need.”

Cruz was frustrated by the lack of consideration for marginalized communities.

“What’s going to happen [if the ban were imposed] is [that tobacco companies] will up the Marlboro Reds, what white folks smoke, and everyone is going to smoke Marlboros Reds. And then [the government] is going to ban cigarettes,” he said, “Once you ban cigarettes, then, what makes a convenient store convenient? Because what makes it convenient [for customers] is ‘Oh, I’m going to grab my milk, eggs, bread, and my pack of [smokes],’ or ‘my rollers to smoke joints with.’”

FDA Commissioner Scott Gottlieb first proposed the ban of menthol cigarettes in November 2018. This year, after Gov. Charlie Baker’s four-month ban on sales of Juul began Sept. 25, BPHC proposed a ban on the sale of all flavored tobacco products that will be considered this month.

Public health commissions have focused on the alarmingly high consumption rate of tobacco by youths since 2008, to which the FDA responded by enacting the Family Smoking Prevention and Tobacco Control Act in 2009. Urged by BPHC, Baker made the decision to impose the vaping ban, which was only lawful when Baker declared it as a “public health emergency.” His proposal had initially struck down use of medical marijuana vapers, too.

“A lot of these decisions are pretty baseless. Just this morning, right before I came [to the rally], I did a quick research. Teen smoking, [which the current bans] are all about, is actually going down,” Cruz said. “It was about 24 percent in the 1970s, and now it’s at 3 percent. I guess the government wants to put the nail on the coffin, which is just reversed [considering the government’s effort in] the past 50 years of fighting Big Tobacco.”

In September, U.S. President Donald J. Trump announced his wish to ban the sale of flavored cigarettes.  Subsequently, some states immediately took action by banning vaping. But the question remains as to whether regulating or banning is the right way to treat this public health issue.

“But before legislators stop the sale of all flavored vaping products, they should consider what appears to be the real cause of these illnesses and the effect bans will have on public health,” Siegel said in an opinion piece for The Oregonian.