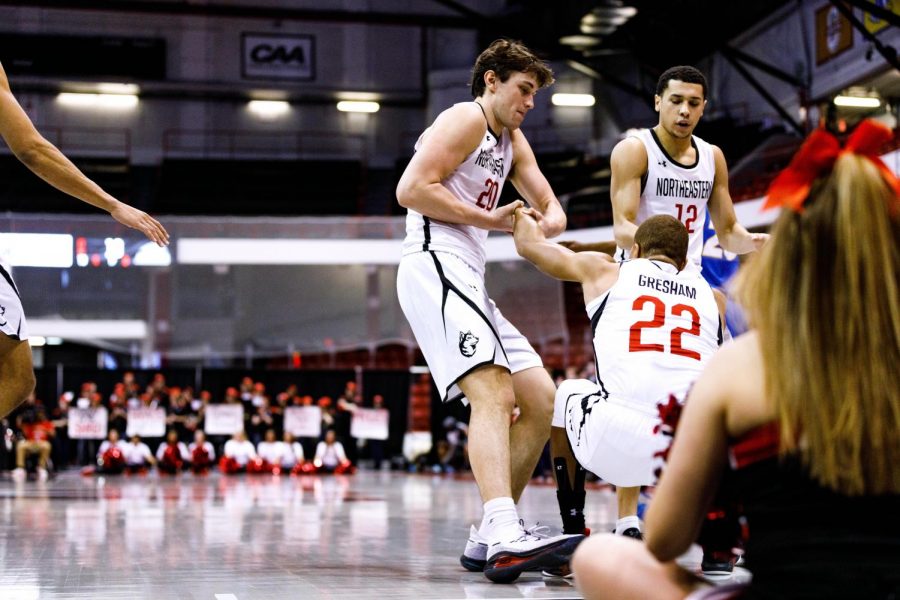 Men's basketball senior guards Jordan Roland and Bolden Brace help a teammate off the ground in a game last season versus Hofstra.

Despite the organization’s longstanding amateurism rules, the NCAA Board of Governors unanimously voted in favor of enabling collegiate athletes to profit from their name, image and likeness last month. Prompted by the buzz surrounding California Gov. Gavin Newsom’s Fair Pay to Play Act, this game-changing decision does not legalize formal payment of college athletes; instead, it authorizes athletes to hire an agent or endorse a product if they so choose.

The college sports industry amassed over $14 billion last year, with money flowing toward coaches, institutions, TV networks, etc. Those excluded from this fortune were the ones serving as the backbone of the industry itself — the athletes.

The NCAA instituted amateurism regulations to preserve the ideal that college athletes are students first and athletes second. Universities could reward the time and effort put forth by their athletes through scholarships and free room and board, but any other forms of compensation were strictly prohibited.

These provisions remained largely unchallenged for decades. When Heisman Trophy winner Johnny Manziel was accused of signing memorabilia and accepting payment in return, the NCAA insinuated their condemnation of such an act by invoking a minor suspension, despite the lack of evidence implicating Manziel.

However, with social media and the emergence of “influencer marketing” in recent years, an imparity affecting collegiate athletes took shape. While most students possess the ability to grow an online following and profit from their image and likeness, “college athletes are the only group that can’t,” Newsom said to the New York Times.

Directly following the passage of Fair Pay to Play, California universities were wary of the law’s ramifications. With the NCAA initially deeming the motion “unconstitutional,” these institutions feared expulsion from the NCAA and its multi-billion-dollar industry. Faced with the decision to either implement the law on a national scale or isolate revenue-generating schools like USC and UCLA, NCAA President Mark Emmert and the NCAA chose the former.

“The states are going to do what they’re going to do. We happen to believe, and common sense suggests that trying to have 50 different sets of rules to run a national system doesn’t make a lot of sense, so trying to do that on a national scale is the only way to have successful sports,” Emmert said to ABC.

Thanks to the famous March Madness tournament, collegiate basketball generates the majority of the NCAA’s yearly revenue. Being at the center of the most lucrative and second most-viewed college sport, basketball players will likely be a target of endorsement offers. This reality begs the question of whether or not Northeastern basketball players would take advantage of their newly-instated license to profit from their image.

“People thought that the idea of athletes being paid in college meant the universities would be paying them, but to make money off of your likeness is a little bit different,” Brace said. “I think it’s fair for them because a lot of football players and basketball players at really big schools have a lot of Instagram followers and have opportunities to make money off their name.”

Senior guard Jordan Roland echoed this sentiment, saying college athletes “should definitely be able to jumpstart their own business or something like that using their image and likeness.”

Counterarguments to this new ruling stem from the fact that many collegiate athletes receive scholarships from their respective universities. Roland explored the warrant of compensation from endorsements on top of an athletic scholarship, arguing that the answer is not black and white.

“I think that’s a fair argument,” Roland said, “but I feel like you’d just have to look at it on a case-by-case basis. I think everybody’s different. It would be hard to slap a one-size-fits-all statement onto that idea.”

The question of equal opportunity also comes into play. Would brands seeking endorsers overlook hardworking athletes from lesser-known schools in favor of athletes from bigger-ticket programs? Brace acknowledged this natural consequence, yet deemed it fair.

“The better players are going to go to better schools . . . In the NBA, if you’re the best player and you play for the best team, you’re gonna have more followers and you’re probably gonna have a larger contract,” Brace said.

Roland agreed with the conviction that the higher-profile players should be receiving the elite endorsement offers, as athletic success and fame are hard-earned, not automatically granted.

“I think if you have a bigger influence, I feel like those players earned that. . . A player like Lebron James is going to get more attention,” he said.

Both Roland and Brace agreed that if offered, they would ultimately accept an endorsement deal or sponsorship agreement. However, for Brace, the decision to accept the offer would not be a thoughtless, knee-jerk response.

“It definitely depends on what the organization was that was offering it,” he said. “I would still want to keep the Northeastern men’s basketball culture in mind in terms of those types of decisions. I think I would definitely accept it if it were a good offer.”

As the NCAA navigates the divide between amateurism and the now-legal monetization of athlete image and likeness, Northeastern Athletic Director Jeff Konya expressed uncertainty. While the consequences of this major shift in the industry remains unknown, Konya is certain this decision will instigate much-needed discourse.

“I think there’s just so many questions right now on it that the best thing that happens. . . is that it’s gonna force the dialogue,” said Konya.