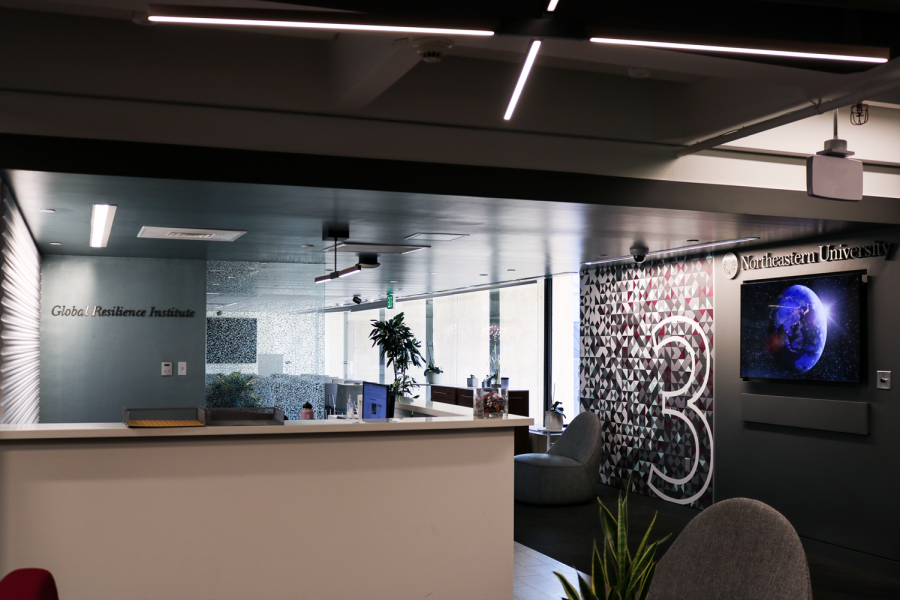 Stephen Flynn is a professor of political science and the founding director of the GRI.

Northeastern’s Global Resilience Institute, or GRI, is a university-wide institute dedicated to advancing resilience-related initiatives. Founded in 2017, its objective is to respond to the “resilience imperative.”

Lauren Rothschild, a fourth-year political science major, is doing her second co-op at the GRI as a research assistant. She echoed the institute’s definition of resilience.

“Resilience generally means the ability to bounce back from any sort of disruption,” Rothschild said.

Rothschild said the work the GRI does is not only to find solutions on how to respond to disruptions, but also to build long-term resistance and preparation.

“A lot of people think [we deal with] disasters like tornadoes, hurricanes, things like that. And that is a lot of what we do, working with communities to come back after those events,” Rothscild said. “But it also means long term resilience. Long term social stressors of a city, or any setting, that can also take a toll on its resilience and ability to respond after a threat.”

Stephen Flynn, a professor of political science and the founding director of the GRI, believes the resilience imperative is animated by societies’ increased vulnerability to disruptions and consequences, and there are “not just more shocks and more intense shocks, but they’re far more disruptive and costly, because we’re hyper connected.”

Flynn believes that as technology advances, the world is designing more for efficiency than resiliency. Therefore, a single shock has the potential to disrupt civil society well beyond a local scale.

For example, when a disaster strikes, people make calls either for help or to tell their loved ones that they are okay. This generally ensures that nearby cell towers become useless due to either overuse or destruction, which is exactly what happened after the Boston Marathon attacks, Hurricane Sandy and even Super Bowl parades, Flynn said.

He said the fact that our only way to send for help can become useless in an instant demonstrates how vulnerable different parts of society are due to technological change.

Stefano Basagni, an associate professor of electrical and computer engineering, is doing research in collaboration with the institute and seeking to solve this issue by turning every cellphone into a ham radio. Using a mesh network of phones that directly communicate with each other, a person could contact any phone within the network without having to use the internet or go through a cell tower.

Flynn refers to this type of research as “resilient engineering” and talked about issues that come along with it in adoption and incentives.

“The idea with resilient engineering is you’re actually wanting to anticipate risk and build in, essentially, the safety factor that will allow it to degrade and then come back, hopefully stronger,” Flynn said. “Even if we solve those problems, there’s no incentive for people to necessarily adopt the designs.”

A solution like having a mesh network on your phone is useless unless people take the time to download it prior to a disaster. This demonstrates the broad issue in education and incentive structures that the GRI is seeking to solve.

In addition to providing backup solutions, part of the GRI’s mission is to establish a culture of resiliency that asks how to inform citizens across the globe about resiliency and incentivize people to adopt security measures before a shock occurs.

In reference to Northeastern’s presidentially appointed institutes, Patterson said the GRI is “arguably the one with the broadest reach with over 100 affiliated faculty in all nine colleges and schools. So, that’s because resilience just touches everybody’s expertise in some way or another.”

Patterson also said there is little room for error.

“It is very broad and we need to do a much better job because in our hyper-connected world we don’t have the luxury of getting it wrong anymore,” Patterson said. “Ripple effects can bring down nation-states if they spiral out of control.”

“I would argue our social immune system is our civil society. And we have to think about bolstering it as much as we do about eliminating hazards, eliminating germs, eliminating, you know, threats. You strengthen the civil society, [and] you can coexist with a lot of risk,” Flynn said.