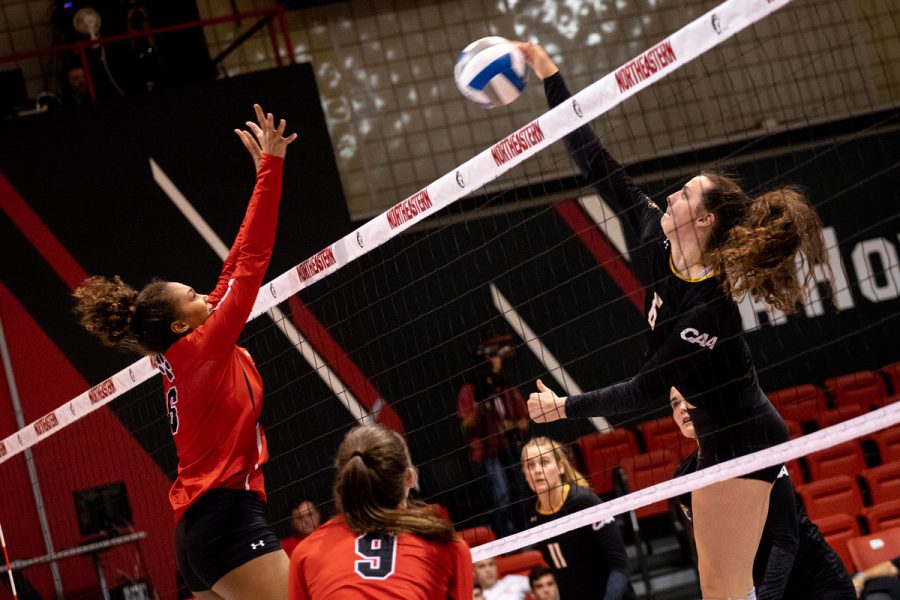 Nailah Jenkins goes up for a block in a match against Towson earlier in the season.

The Huskies split their homestand matches in the final weekend of the season, emerging victorious as they shutout Delaware, 3-0, before losing their final match to James Madison, 3-1.

Senior defensive specialist Clare Lund recorded her 1000th career dig as a member of the Husky squad in the match Friday night versus Delaware (14-13), as the Huskies took down the Blue Hens in three sets, 25-23, 25-22 and 25-22, to pick up their 15th win of the season.

Delaware came out firing on all cylinders in the first set, going up 8-2 before the Huskies began crawling their way back, eventually tying the game at 15. Back-and-forth action into the late-game was rattled by two subsequent 2-0 Husky runs that provided them with the first set win.

A similar theme emerged in the second, as the Blue Hens took an early 10-6 lead before the Huskies put together a 3-0 run, and later a 4-0 run to take a 17-15 lead that they rode to victory to give themselves an advantageous 2-0 match lead.

The third set saw Lund pick up her monumental dig in a close lead-changing frame that emerged tied in the late-game at 21. A clutch 3-0 run by the NU offensive provided the momentum for the sweep.

A hard-fought first set saw the Huskies tie it up at 24 late in the game. However, the late Husky push proved not enough, as the Dukes ran away with a 2-0 run that secured them the set win.

The Huskies put together one of their most impressive runs of the season in their second set Sunday afternoon, as they surged for 10 points in a row to power them to a blowout victory that tied the match at one set apiece.

JMU did not falter, however, as they came back out fighting in the third to take an early 10-6 lead. While the Huskies did put up quite the fight, the Dukes earned a 2-1 lead in the match with the third set victory.

A consistent story was told in the fourth, as an early JMU five-point run provided them with a lead that they protected into the late-game. The Dukes defeated the Huskies 25-23 in the final set, securing them a match victory, 3-1.

The Huskies will try to shake off the recent loss as they look ahead to their CAA Tournament. The fourth-seeded Huskies will face fifth-seeded Elon (13-17) in the quarterfinals Friday evening.