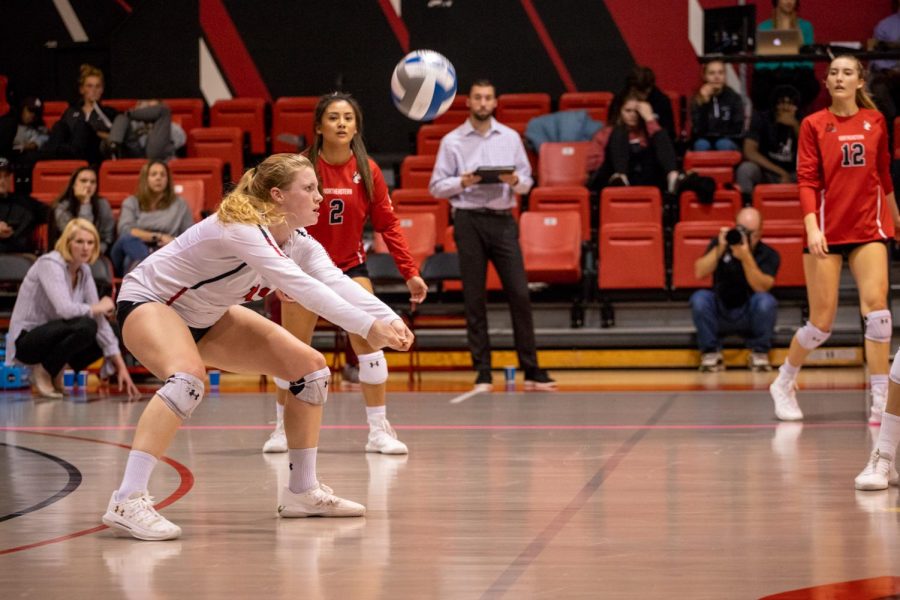 Senior defensive specialist Clare Lund goes for a dig in a game earlier this season versus Elon.

A back-and-forth nailbiter match in the first round of the CAA women’s volleyball tournament saw the fourth-seeded Huskies fall victim to the fifth-seeded Elon Phoenix, 3-2, in Hempstead, New York.

The two teams split the season series, which was evident in the match Friday afternoon, as the Huskies and the Phoenix traded set wins until the fifth and final.

The first set was close until Elon put together a 5-0 run to go up 16-10. The resilient Huskies battled back, however, and brought the game within a score with a five-point run of their own. Looking to gain the advantage with the first set win, the Huskies, up 22-19, fell apart, allowing a 3-0 Phoenix run followed by back-to-back two-point plays that set Elon up for a set one victory, 26-24.

Striving to even things up, the Huskies put together a marvelous early lead with multiple scoring runs that saw them up 15-10 entering the late-game. However, another 5-0 Phoenix run brought the score close again, 17-16 NU. The Husky offensive proved unrattled, however, and a quick 4-0 run powered the Huskies to a 25-23 set two victory.

Elon battled back in the third, behind the power of three 3-0 runs that blanked the NU offense. A late-game fight from the Huskies was not enough, and the Phoenix went up 2-1 with a 25-18 victory.

An early 5-0 run from the Huskies started off the fourth, and they held control early, leading 8-3. Subsequent 4-0 and 6-0 NU runs solidified the victory, forcing the match into a fifth and final set.

The Huskies went up quickly in the fifth at 3-1. Elon brought the score back even, and the two offensive units fought back-and-forth into the late-game. Up 14-13, the Huskies looked to send the Phoenix home and enter the semifinal rounds. However, Elon had other plans, and went on a 3-0 scoring run to end the game and eliminate the NU dreams, 16-14.

The Huskies finish the season with a 15-14 record. The Elon Phoenix will play the first-seeded Towson Tigers in the semifinal round tomorrow at 2 p.m.