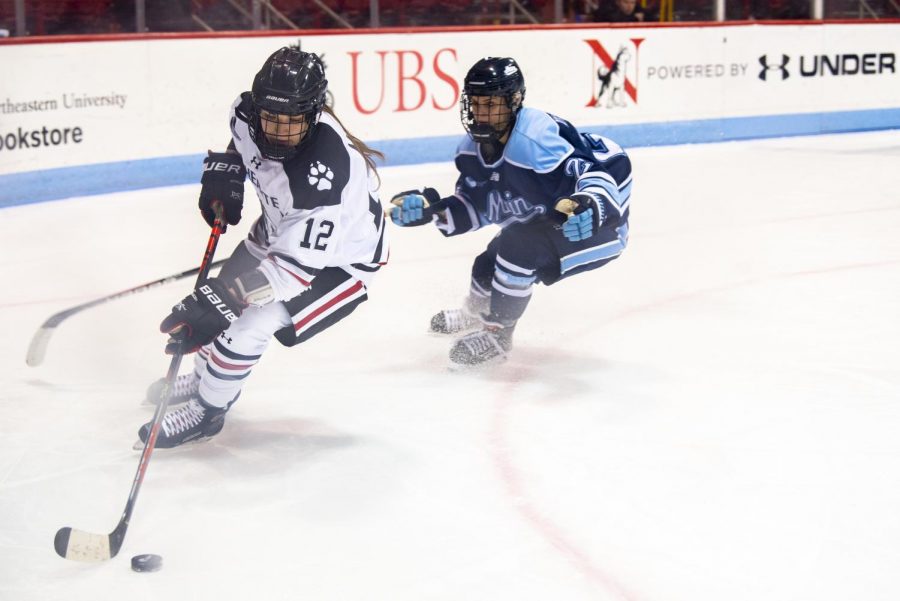 Chloe Aurard moves behind the net during yesterday's game against Maine.

The Huskies were denied the homestand sweep of the Maine Black Bears Sunday afternoon, as they took an overtime loss for their second defeat of the season, 3-2, at home in Matthews Arena.

“We were just sluggish from the start,” said NU head coach Dave Flint. “We found a little bit of mojo in the second after they scored their second goal, went down 2-0, I think we ramped it up, but we just kind of ran out of gas. It was our fifth game in 10 days and it showed.”

The Huskies took an early deficit in the opening frame, as aggressive play from both teams early on finally proved beneficial for the Black Bears. A three-on-two push into the Husky den resulted in a shot from senior forward Vendula Přibylová that ricocheted off of NU junior goaltender Aerin Frankel, right into the stick of freshman forward Morgan Trimper. She easily guided the puck into the right side for her first career goal and first career point, putting the Black Bears up by one.

Despite the early Maine goal, the Huskies did outshoot the Black Bears 11-5 in the opening period. However, the Huskies went 0-2 on their power-play opportunities, something that they needed to  capitalize on against this aggressive Maine offensive.

After consecutive penalties on both sides resulting in a four-on-four to start the second, the Black Bears powered up the right side into Husky territory. A shot by sophomore forward Liga Miljone bounced off of Frankel and was gathered by Přibylová, who shot from close-range into the left side to secure a 2-0 Maine lead.

The Huskies followed up a couple minutes later, however, as freshman forward Jess Schryver drove up the right wall and towards the left crease before firing a shot into Maine junior goaltender Loryn Porter that bounced down in front of the goal. Junior forward Veronika Pettey sped into the zone and scuffled the puck under Porter’s legs to cut the deficit to one.

With under two minutes remaining in the second, the Huskies found the equalizer via a short-handed goal. Sophomore forward Alina Mueller bounced a shot off the left post that deflected left wide. Sophomore forward Chloe Aurard fired from just outside the face-off circle and in, tying the game at two going into the third and final period.

A deceiving tie score going into the third did not tell the true story of the game. The Huskies were outshooting the Black Bears 38-13 going into the final frame.

The Huskies continued to pile on pressure in the third, pushing their regulation shot total to 52. A hard fought frame for both teams ended with the score still locked, pushing the game into a five-minute overtime.

Overtime did not last long. Just over 30 seconds in, Maine sophomore forward Celine Tedenby fired in from the right side towards an unprepared Frankel, beating the keeper and securing the Black Bears the win.

“I think the goals they scored were defensive breakdowns,” Flint said. “It was being lazy on the back check, not picking up. In the overtime goal, nobody picked up in front the player that scored. It’s taking care of our own, it’s great if you put up 52 shots. I felt like we needed to take better advantage of our opportunities but we have been really good defensively up until this point and today I felt like we had a real letdown defensively.”

The Huskies will look to rebound on Friday night versus Holy Cross (2-10-3) at home in Matthews Arena.