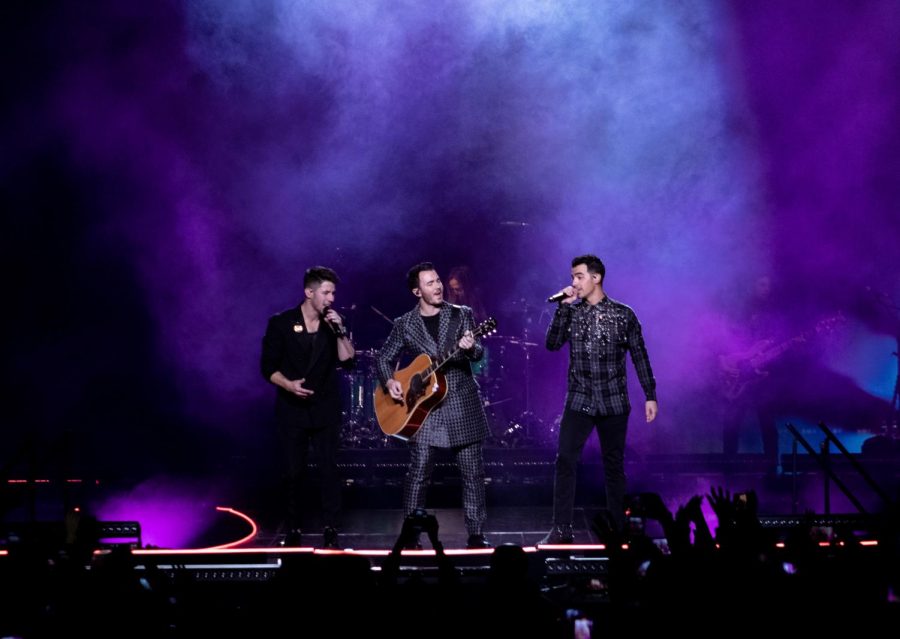 The Jonas Brothers performed at TD Garden on Nov. 24 after a six-year hiatus.

Following a six-year hiatus, the brothers garnered a mass amount of fans from all ages; from pairs of older friends wearing shirts from the 2008 and 2013 tours, to a family with two young boys.

TD Garden lit up in purple, on Nov. 24, as the synchronized light bands unified the thousands of Jonas Brothers fans that filled the stadium. By popular demand, they returned to Boston for a second time on their Happiness Begins tour after performing at the Garden in August.

Jordan McGraw opened the concert with his electrifying set, getting the crowd hyped up with his fun songs and powerful stage presence. Following his set, Bebe Rexha got the audience dancing as she sang some of her top hits into a bedazzled microphone. During one of her songs, Bebe Rexha brought a fan up on stage, and the crowd went wild for the fan’s show-stopping dance moves alongside the pop singer and her talented backup dancers.

The energy in the arena was unmatched, with fans chattering in excitement and anticipation, waiting for the Jonas Brothers to begin their set. When the lights dimmed and a video depicting three younger versions of the brothers filled the big screens, the stadium roared with excitement.

The Jonas Brothers had  an explosive entrance as they descended from a raised platform with sparklers going off behind them, singing the song “Rollercoaster” from their most recent album. Clad in all black outfits with pops of textures, plaid patterns, and light-catching beading, the Jonas Brothers  embraced the cheers of fans with big smiles and looks of appreciation.

The setlist held a collection of songs from their old rock-and-roll inspired classics and new hits that celebrate their return to the music scene. The first throwback song the Jonas Brothers rocked out to was “S.O.S,” which excited the crowd. Many of the older fans were particularly excited as the song transported them to their younger selves.

Their performance of “Only Human” was broadcasted live for the American Music Awards, which Joe told the crowd early into the set, bringing ear-deafening screams and cheers from the crowd through the entire performance. Let’s show the world “what it means to be a Jonas Brothers fan and represent this great city,” Nick said.

Set design played a big role in delivering the feel of nostalgia and growth that  band’s journey over the past decade. As they sang some of their old hits, footage played of them in their younger years playing the songs in concert as well as clips from older music videos.

The band walked down the catway, with fans lining the railings, hands out for a high-five from the brothers. At the B-stage, a smaller secondary stage, they sang their soft hit “Hesitate” as the platform raised. They also took fans back all the way to 2008, playing “Gotta Find You” on the B-stage, as well as “Play My Music” earlier in the set, from the Disney Channel Original Movie, “Camp Rock.”

Joe and Nick also sang  some of their most popular solo songs, including Nick’s hit song “Jealous.”

Joe performed a version of “Cake by the Ocean” from his band DNCE, with Nick joining in toward the end. The venue turned into a party scene as confetti covered the fans and inflatable air dancers lined the stage and walkway.

The stage went dark and lit up with a video of Kevin holding his two daughters meeting a version of his younger self. Fans awed and cheered as Kevin returned to stage in a new outfit, sat at the piano and began playing the intro chords “Comeback.” Once rejoined with his brothers, who had also put on more casual outfits, they broke out into another ballad performing “When You Look Me in the Eyes,” sending fans into a sway with flashlights lighting up the arena.

The last two songs of the main set were crowd favorites: “Lovebug” and their popular cover of “Year 3000,” originally performed by British band Busted. These songs resulted in some of the loudest audience sing-alongs.

In an encore set, The Jonas Brothers jumped back on stage with flames shooting up from behind them as they abruptly began their 2008 hit “Burnin’ Up.” With microphones pointed at the crowd, the whole venue rapped Big Rob’s verse. The concert came to an end with the Jonas Brothers chart-topping, revival single “Sucker.”

As the Jonas Brothers took their final bows, fans clapped and stood, admiring the band with big smiles.