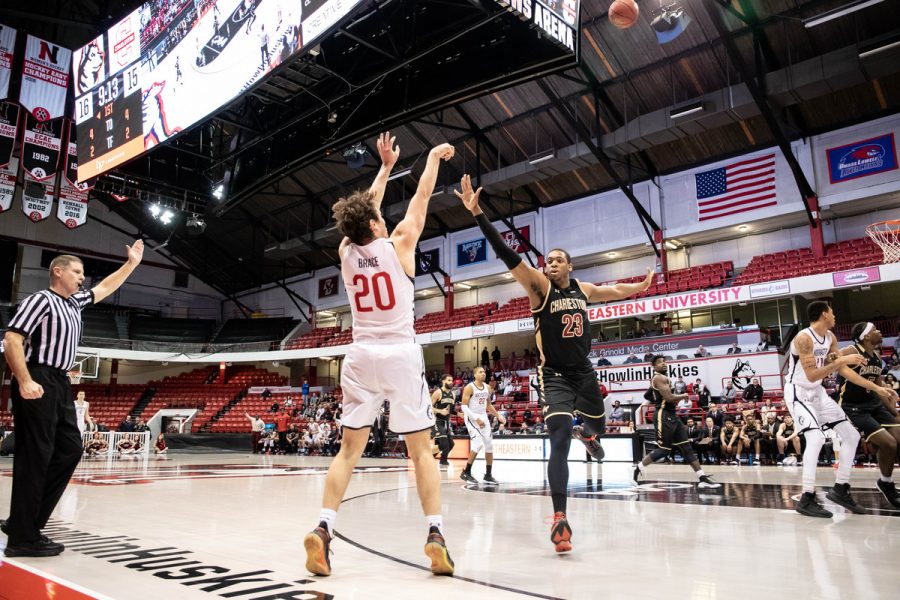 Senior guard Bolden Brace has stepped into a larger role this season, averaging 30 minutes per game.

“That was probably one of the best days of my life,” said senior guard Bolden Brace.“I was in my dad’s office at home and we called Coach [Bill] Coen and I said, ‘I want to play for you.’”

He was talking about the day he signed with Northeastern to play basketball.

Rewind to many years earlier, when Brace began his basketball career in kindergarten at the George Ben Page Youth Center in Santa Barbara, California where he played until the eighth grade. Then, at Santa Barbara High School, he played his sophomore, junior and senior years on the varsity team.

“We won a lot of games,” Brace said. “Junior and senior year I was kind of more of the leader, whereas sophomore year I was sixth man.”

In his senior year, he led his team to win the CIF Southern Section basketball title in the 2015-16 season.

Brace traded in his life at the beach for a new chapter in the snow after he visited Northeastern with his parents. NU was the first school to reach out to him, and although six other universities followed, once NU head coach Bill Coen showed him around campus, there was no competition.

“Looking back I probably should have visited other schools too, but I’m glad I only came here because I’m glad I ended up here,” said the senior guard. “Looking back, it’s been a good four years and I’ve really loved it.”

Since his freshman year on the court, he has seen himself become more willing to help others and become more confident.

“Playing with so many different guys and playing under the same coaching staff for four years, it gets a little bit repetitive,” Brace said. “But staying confident and learning how to be confident with different players on your team and accepting different roles I think has been a big part of my game.”

In 2018, Brace was named the Colonial Athletic Association’s Sixth Man of the Year, but he said his proudest moment was when the Huskies won the CAA championship last season and appeared in the NCAA Tournament.

In his freshman year, he also made it onto ESPN’s SportsCenter’s top ten plays segment.

“All of my friends from home texted me,” Brace said. “That made me more proud in terms of my friends at home, but winning the CAA for sure was my proudest moment.”

When he’s not at practice or training with assistant coach Brian McDonald, he’s studying construction management, a possible path to employment after he graduates in May.

“I would like to go home,” Brace said. “I don’t know exactly what I want to do yet, I would like to get in construction at some point, I’m not sure exactly what sector. But I would like to be back in California, or somewhere that has a beach and where my friends are. My girlfriend [Women’s hockey forward Matti Hartman] is going to go to [physician assistant] school so wherever she ends up might change that decision, so we’ll see.”

He was noncommittal on the topic of potentially playing basketball professionally overseas.

“I’m still trying to figure that out, I think it would be a great experience, but I’m pretty ready to get home,” Brace said. “I don’t know, we’ll see.”

As his basketball career at Northeastern comes to a close, Brace has his eyes set on winning another CAA championship. But most of all, he wants to leave his mark.

“I want to leave a lasting impact on the young guys, and just enjoy the moment while I can and while I’m playing with these guys like Jordan [Roland] and Tomas [Murphy] and Max [Boursiquot], I’ve been playing with them for a couple of years now,” Brace said. “I’m trying to enjoy it as much as I can, I’m excited to see what happens.”

With his final semester approaching and his family across the country, Brace remains focused on what matters most.

“Before every game and after every game I talk to my parents and my family always emails and texts me,” Brace said. “They always tell me how they enjoy watching me play. That’s kind of the biggest thing that has kept me motivated to keep getting better and to be the best that I can be. I’m excited that they get to watch me for one more year, and I just want to cherish it while I can.”