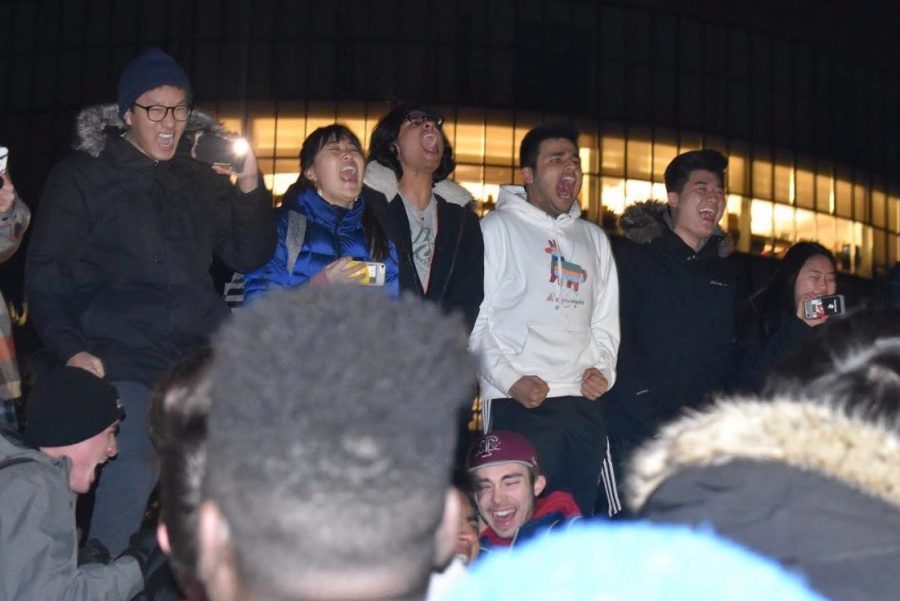 Students gather on Centennial Common to scream before finals.

Students made a screaming entrance into the first official day of final exams, gathering in Centennial Common at midnight Thursday Dec. 5 into Friday Dec. 6 to let out a massive, primal scream.

The collective scream lasted nearly two minutes and ended with a round of applause. After the scream, the crowd quickly scattered, as many anxious students returned to their work.

“I’m here at the primal scream to get some anger and frustration out. I don’t feel prepared for finals, but I feel like screaming and letting my anger out will help me prepare better,” said Kirsten Mallon, a third-year cell and molecular biology major.

This is the second organized primal scream that has occurred on Centennial Common. The first scream occurred in April, at midnight the night before finals began.

This event, titled “NU Primal Scream Fall ‘19,” gained its popularity on Facebook. On the page, 285 people responded that they would be attending the event, and 745 others marked that they were “interested.”

A few students even dressed up for the event.

“I am currently wearing a onesie from Justice that is Christmas-themed,”  Mallon said.

“I’m decked out in every Christmas gear I could find at Dollar Tree,”  Kelly said.

While many students came to the event to let out their stress, anger and frustration from studying for finals, some students went to the event for other reasons.

“It’s just good to get it out of the system. It’s been a very stressful semester and finals week is going to be even more stressful so it’s good to let it all out,” said Sam Panagopoulos, a second-year studying robotics and mechatronics engineering.

“It’s also just a good excuse to make a lot of noise, have a bit of fun with the friends. It’s more of a social event than an actual therapeutic scream.”

However, for some, the primal scream was an effective form of catharsis.

Kelly recalled, “Earlier today I was in my room. I was studying, ready to scream, but I couldn’t because of quiet hours, so here I am. This is my chance, right here, right now and I’m ready for it.”