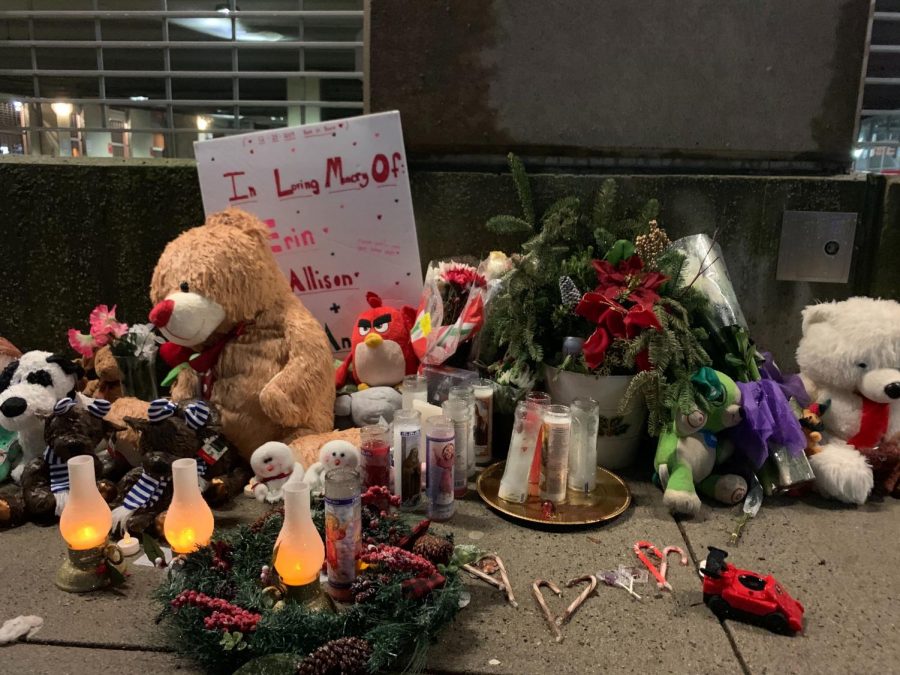 A memorial set up outside the garage.

A woman killed herself after her two young children fell to their deaths off Renaissance Park Garage on Christmas day, according to Boston Police. The woman and children were pronounced dead at a local hospital after they were found unconscious on the sidewalk outside of the garage Wednesday afternoon.

In a Dec. 26 press conference, Suffolk County District Attorney Rachael Rollins identified the victims as Erin Pascal, age 40, and her children Allison and Andrew, ages 4 and 1.5 years, of West Roxbury.

“Yesterday, the unspeakable happened and now we are all struggling to make sense of the circumstances surrounding these deaths,” Rollins said. “Though we remain in the very early stages of our investigation, the evidence collected thus far suggests that these deaths — which occurred between approximately 1:25 and 1:35 p.m. yesterday — were very likely a double murder-suicide.”

At approximately 1:26 p.m., the Northeastern University Police Department, Boston Police and Transit Police responded to the garage and found the three individuals, according to statements made by Boston Police Commissioner William Gross during a press conference at around 3:30 p.m Wednesday. The garage is near Ruggles station and several NU residence halls and academic buildings.

Rollins said the nature of the tragedy indicates the mother had severe mental health struggles. She said she felt it “imperative that we let people know that there is help and if they are interested in calling Samaritans statewide hotline, that number is 877-870-HOPE.”

“On Christmas and in the holiday season, where many people are celebrating, it can be a challenging and difficult time. As a mother, it was incredibly hard, this scene in particular, where there were two young children who lost their lives today,” Rollins said. “We’re going to do everything we can to get answers in collaboration with the Transit Police, the Northeastern Police and the Boston Police departments.”

The exact nature of the deaths is unclear, and the investigation is still ongoing. Gross urged anyone with relevant information to call 1-800-494-TIPS.

“We want everyone to know … we will do everything in our power to find out everything we can about this death investigation,” Gross said.

Northeastern has indefinitely blocked all access to the top two floors of the Renaissance Park Garage, according to university spokesperson Renata Nyul.

“This restricted access will continue until a permanent solution is implemented. In addition, effective immediately, there will be 24-hour security staffing in place to monitor the Renaissance Park garage,” Nyul wrote in a Dec. 25 email to The News.

This is the third fatal incident to take place at Renaissance Park Garage this year, something Rollins addressed in the Dec. 26 press conference. In May, a Boston College student committed suicide by jumping off the garage. Another incident took place Dec. 9, although no information has been made available beyond a statement to The News from university officials.

Northeastern increased security on all on-campus parking facilities including the Renaissance Park Garage “earlier this fall,” according to Nyul.

In response to a question about the prior incident involving the Boston College student, Gross said they have responded but do not want to draw attention to the location. “I don’t want to give it the amount of publicity that this is the place you go to commit any act that has happened in the past. Today is a tragedy,” Gross said.

This is a developing story that will be updated. If you have any information about this incident, please reach out to The Huntington News at [email protected]

Updated Dec. 25 at 8:20 p.m. to include information from a university spokesperson.