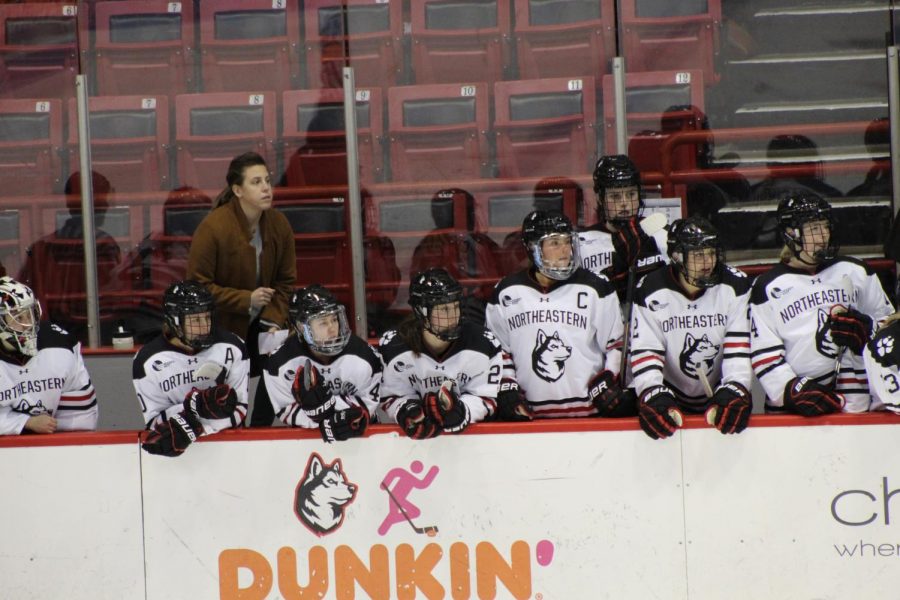 NU's bench keeps an eye on the action during a game earlier this season.

Gwyneth Philips, Northeastern’s (18-3-1, 15-2-0 HEA) backup goalie, got her third start of her freshman season and impressed again. Philips didn’t allow a goal in either of her first two career starts, and she kept that shutout streak going tonight with 22 saves, giving her an extremely impressive start to her Husky career.

“Gwyneth has got three starts, three shutouts. Aerin has been rock-solid all year, so it is reassuring for me as a coach knowing I have two of the best goalies in the country. By far they’re the best one-two tandem in the country,” said NU head coach Dave Flint. “I’m really, really happy with the way Gwyn is playing.”

Flint noted that it can be tricky for a goaltender to step in so infrequently as Philips has, but so far the freshman has been unaffected, as evident by her shutout streak.

“When I do get the opportunity, I take advantage of it. I’m happy,” Philips said. “My teammates see that I’m taking advantage of it so I’ve just got to stay mentally with it.”

NU started off slow, as UConn trapped them in their own zone for the first few minutes of the game. Once UConn had a power play, it seemed that NU’s skaters woke up, and they scored shortly after killing off their own penalty.

“We’re not starting fast, I think I’ve said it my last four games in my pregame speech, ‘Hey listen, we gotta start fast.’ I don’t know what it is, it usually takes us five minutes and then we get our feet going,” Flint said. “We’re lucky we’ve got good goalies and don’t give up a goal early and get our act together.”

NU’s first goal came in the seventh minute from freshman forward Kate Holmes, who earned her fourth goal of the season off a rebound from sophomore defender Miceala Sindoris. Sindoris ripped a shot from the left circle, which bounced off UConn (12-10-1, 9-6-1 HEA) senior goalie Morgan Fisher and gave Holmes a chance to scoop and score.

Fisher has had a strong career with UConn and an excellent season so far, but just didn’t have it against NU once the floodgates opened. Sophomore forward Chloe Aurard followed Holmes’ goal just two minutes later with an excellent shot from the slot off an assist from senior defender Codie Cross. The puck threaded through traffic and off the pipe past Fisher, for NU’s second goal on their first seven shots and Aurard’s 25th career goal.

Freshman defender Megan Carter was NU’s next goalscorer, and while Aurard’s goal was hard to fault Fisher for, Carter’s goal was a clear case of a shooter outright beating the goalie. Carter hit a snipe from just within the blue line to the top corner of the net. Fisher was unscreened on the play, but simply could not stop Carter’s laser of a wrist shot, giving NU a 3-0 lead.

Fisher’s tough night ended early, as a big collision in front of UConn’s net in the third minute of the second period left her down on the ice for a while. Fortunately, she was able to skate off the ice under her own power. She was replaced by sophomore netminder Samantha Carpentier-Yelle.

Carpentier-Yelle was greeted with an onslaught of Husky pressure, but stood tall through the rest of the second, a period which NU largely dominated, despite no change of score. She looked like the best UConn Husky on the ice tonight, as NU forwards and blueliners largely had their way with UConn defenders and multiple NU Huskies had highlight-level dekes in the period.

Carpentier-Yelle ended the game with one goal allowed and 21 saves, and was helped by some serious puck luck, as twice NU hit the pipes but didn’t light the lamp.

UConn played a largely clean game, as far as penalties are concerned, but that came to an end in the third. UConn picked up two penalties early in the frame, and while they killed off the first, UConn’s PK unit couldn’t hold up after their second minor of the period, which came less than a minute after killing the first. Just 8 seconds into NU’s second power play chance, the Huskies cashed in.

Sophomore star center Alina Mueller got her 14th goal of the season in the seventh minute of the third off assists from Aurard and junior blueliner Skylar Fontaine. NU won the faceoff and the puck found Fontaine, who ripped a shot on net. Mueller deflected Fontaine’s shot, which Carpentier-Yelle saved but could not corral, giving Mueller a chance to locate and easily put the puck in the net, giving NU a 4-0 lead.

NU’s penalty killers were strong once again, killing all four of the penalties the NU took. NU’s best special teams moment came at the twilight of the game, as NU had to kill a five-on-three chance for a minute and a half with just under four minutes left in the contest. Philips and her killers were excellent and the NCAA’s best shorthanded squad flexed its muscles to keep Philips’ shutout alive.

“It’s been quite a high,” Philips said about her start to her Husky career. “I’m pretty excited that it started off this way. I definitely have a lot of backing from my teammates and my coaches, so hopefully it keeps going this way.”