AllCappella 2020: A celebration of Northeastern’s a cappella community 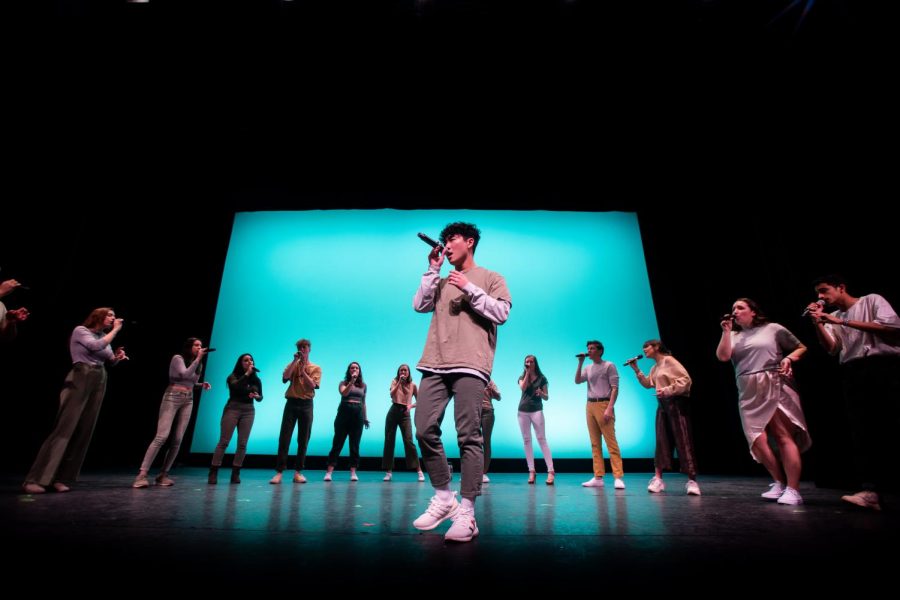 All six of Northeastern's a cappella groups performed at the AllCappella show.

Hundreds of family members, friends and fans filled Blackman Auditorium to the brink as all six of Northeastern’s a cappella groups came together Friday night to participate in the ninth annual AllCappella showcase, hosted by NU a cappella group The Downbeats.

As the audience anxiously awaited their favorite groups, the performers backstage were equally excited. The Downbeats kicked off the event, with an eerily beautiful rendition of Beyoncé’s “If You Let Him Take Me From You.” Soloist Sultan Aldabal’s final chorus prompted cheers and applause from the audience.

The showcase’s two emcees, The Downbeats President Ryo Tsuda and former member Charles Zheng, then thanked everyone for coming out before introducing the next group: Treble on Huntington.

Treble on Huntington, Northeastern’s first all-female-identifying a cappella group, performed a diverse set of songs, including Zayn’s “Rainberry” and Bishop Briggs’ “The Fire.” During their Briggs cover, the nine members wowed the crowd with their choreography, garnering thunderous applause.

“AllCappella is an awesome chance for us to root for each other and see the amazing music we’ve all been working on throughout the year,.” said Kismet Seekond, president of the group. “Every single group brings something different to the table. Some are all-male, some all-female, and some even arrange their own music, and it’s genuinely so cool to see. We have so much pride to be at a school with only talented groups like these.”

Next up were the Nor’easters, two-time champions at the International Championship of Collegiate A Cappella, or ICCA, and Northeastern’s original a cappella group. The co-ed group opened with a passionate and dynamic arrangement of Sam Smith’s “Fire on Fire.” They then contrasted that with a beautiful cover of “Magic” by Coldplay, which silenced and mesmerized the audience. Soloist Felisha Cabral’s poise and tone left the crowd wanting more.

Distilled Harmony, the next group to perform, immediately transformed that energy into the kind that had the audience dancing in their seats. Their confidence and skills shone through in their first song, a cover of Rachel Platten’s “Perfect For You,” which is from their recent album “High Definition.” This performance hyped up the crowd and received cheers throughout. The group also gave the audience a sneak peek at their ICCA 2020 set, with an incredible cover of “Everybody Wants To Rule The World” by Tears for Fears.

After a short intermission filled with family members and friends hugging and congratulating the performers, Zheng was back on the stage to reintroduce his former group: The Downbeats.

The group’s first song, OneRepublic’s “Love Runs Out,” showcased the strength of their ensemble. The focus and connection of The Downbeats was clear. Tsuda then performed “Your Guardian Angel,” a single that the group will release later this semester. Tsuda explained that this song “means a lot to us,” especially because the award-winning arrangement was done by Zheng. Tsuda began the soulful song facing his fellow members, who upheld a sense of unity throughout the piece.

Northeastern’s only all-male a cappella group, The Unisons, followed, jokingly introducing themselves as “Northeastern’s worst a cappella group at writing bios.” They then gripped the crowd with their rendition of Maroon 5’s “It Was Always You.” The audience’s energy escalated into the group’s final song, which transformed into a vocal duel between two extremely talented soloists, receiving an enthusiastic response from the audience.

The final group to perform was Pitch, Please!—Northeastern’s newest a cappella group and ICCA 2019 finalists. As the all-female-identifying group entered, the audience welcomed them with raucous applause.

“It’s always our favorite to be singing with all the other groups on campus,” said group member Mackenzie Hunt.

The group’s first song featured Hunt as the soloist. They then contrasted that melodically mesmerizing piece with their energetic and feel-good performance of “Top Of The World,” rounding out their set.

Zheng and Tsuda then reappeared one last time, introducing The Downbeats for one final song: a groovy cover of Janelle Monáe’s “Make Me Feel.” The audience erupted into one final round of applause, and the crowd began to disperse.

“The best part of AllCappella is being able to inspire the next generation of singers,” said Tsuda. “Especially for first-year students or N.U.in students, it may be one of the first events they go to where they can be enthralled by the amazing arts at Northeastern.”

Editor’s Note: The News’ city editor Laura Rodriguez is a member of The Downbeats.