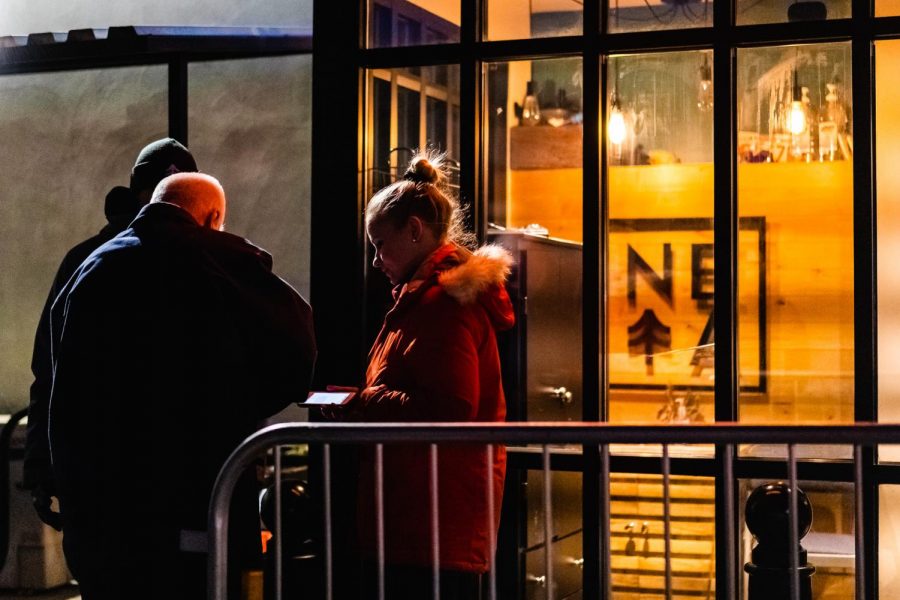 Costumers wait outside the NETA cannabis dispensary in Brookline.

“There’s more demand than supply right now,” said Jim Smith, attorney and former Massachusetts state representative, to a small group of East Boston residents. “There are 33 stores open at this moment, 36 [total soon], and I hope 100 by the end of the year.”

On Jan. 27, community members gathered in the East Boston Public Library to discuss zoning and construction plans for a new dispensary in Maverick Square. Ten members of the community attended the meeting, expressing their approval and concerns for the new business venture. Smith said the dispensary’s application had been approved, despite a longstanding rule prohibiting cannabis establishments from opening within a half mile of each other.

While this zoning issue is part of the controversy, residents were more focused on community impact.

Smith assured the residents that this new business would not cause any negative disruption to the community. Boston residents still had concerns.

Janet Knott, a woman who lives two blocks away from where the dispensary will open, came to the meeting displeased.

“Will we have a say, or will this just be another tsunami?” Knott asked after the meeting ended. “Every neighborhood is at their own devices to figure out how this is going to work.”

Other residents were also doubtful that a new cannabis dispensary would have no detrimental effect on their quiet community, sharing worries that itmight cause violence.

“There has not been an incident in any of these stores… since they started opening in Massachusetts,” Smith said.

“It’s not that I’m opposed to marijuana,” said Knott’s friend, who asked to stay anonymous. She mentioned that it was similar to adding a liquor store, saying, “It’s another vice.”

Maverick Square is a highly congested area with multiple elementary school bus stops, one resident pointed out at the meeting. The question of how the city will control loitering outside of the store was in the minds of many participants at the meeting. One community member cited the example of the Brookline dispensary.

The Brookline dispensary, formally known as New England Treatment Access, or NETA, opened Mar. 23, 2019 on Washington Street. While large crowds were anticipated during the first opening days, the long lines lingered for months.

The first question that was asked about the East Boston dispensary was, “Where are people going to line up?”

Smith insisted that loitering would not be tolerated, but the residents remained unconvinced. He compared a dispensary line to one at a coffee shop: if one line is too long, there are so many dispensaries opening up in the area that the people can just walk to another one.

As of right now, there are two cannabis dispensaries scheduled to open up in the East Boston neighborhood, but their locations will be close to one another.

These two dispensaries will be the first of their kind in East Boston. It is a new business venture for the four men who will be running the store, as well as for the neighborhood of East Boston.

“I’m not an expert in cannabis, but I’m learning,” Smith said.