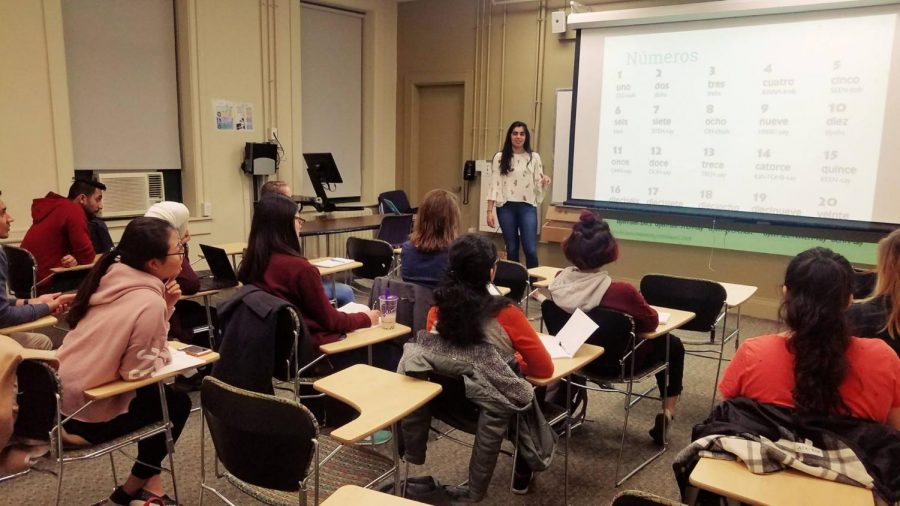 The Northeastern University Culture and Language Learning Society, or NUCALLS, is a group dedicated to sharing the power of language. They provide free language sessions once a week in hopes of enriching and educating the Northeastern and Greater Boston community.

“People are learning from native and/or fluent speakers of the language who are, in a way, the best teachers,” said Samantha Price, a fourth-year computer science and linguistics major, who has attended Korean, French and Mandarin sessions for three years.

Sessions are divided into four sections to fit every individual’s needs and abilities, and to create an environment that will be most conducive to their learning: Beginner, Intermediate 2, Intermediate 3 and Advanced.

In any fall or spring semester, NUCALLS can expect about 300-400 people to show interest in language sessions. Upper-level sessions tend to have fewer attendees than the lower-level ones.

NUCALLS President Stephanie Manna believes that the club’s mission is essential to building a diverse and culturally-conscious community.

“[NUCALLS] brings people from different backgrounds together,” Manna said. “I think that now, more than ever, it’s so important to build a stronger community, one that crosses borders.”

Manna is completing her final year at Northeastern as a candidate for a master’s degree in International Management. She speaks English and Spanish fluently, and previously taught Spanish sessions for NUCALLS.

Given the nature of the organization, some language sessions are offered more consistently than others. Spanish, Hindi and Mandarin tend to be available every semester.

While some of the language sessions are not offered every semester, NUCALLS does have a large network of students who are passionate about their mission.

“Many people who have to take a break for the sake of co-op or semester abroad tend to rejoin and lead sessions again when they come back,” Manna said. “The people involved in NUCALLS tend to be in it for the long-haul.”

Sgarbi has also been a language ambassador for beginner Italian sessions for the last four semesters. Before NUCALLS, he had only had one-on-one and small group tutoring experience, but jumped into his role head-first.

“I was most nervous about the content I was teaching,” Sgarbi said. “I wanted to make sure my class was engaging and worth their time.”

Sgarbi said he finds teaching Italian very rewarding, and feels it most when he runs into current or former session attendees on campus and they greet him in Italian.

“The session plans are not super rigid, they’re modeled off of what the attendees are looking for from them,” Sgarbi said. “So it’s no pressure, sessions are supposed to be fun, and I think they are.”

Mofe Kayode, a fifth-year mechanical engineering major, has been attending language sessions for about two years. He has so far attended  Mandarin, French, Italian, Spanish, Greek and Japanese language sessions.

“In formal classes, students can get intimidated by their grades and GPAs, but [NUCALLS] is all about passion. People come because they want to,” Kayode said.

The desire to learn a language is the driving force to success in NUCALLS language sessions. Former Arabic language ambassador and Northeastern graduate Osmaan Shahid said the time lost between sessions can be an obstacle for many.

“The classes are a blast, but the hardest part [is that] they’re only once a week. There’s only so much progress that can be made, unless students are putting in the effort to practice outside of classes too,” Shahid said.

In addition to weekly language sessions, NUCALLS also hosts cultural events and activities throughout the semester. Some events are held in collaboration with other cultural organizations around campus, such as a French movie night held on Centennial.

However, according to Manna, NUCALLS has been starting to focus less on events that involve the public, and rather focus on events that strengthen the bonds created between language ambassadors and their session attendees.

Everyone involved in a language session has an end-of-semester get-together to celebrate all the work that they’ve accomplished.

“We think it’s more important to show our language ambassadors how grateful we are,” Manna said. “The fact that they’re willing to volunteer all of their time and effort, and want to help people gain more insight into their cultures is just great.”