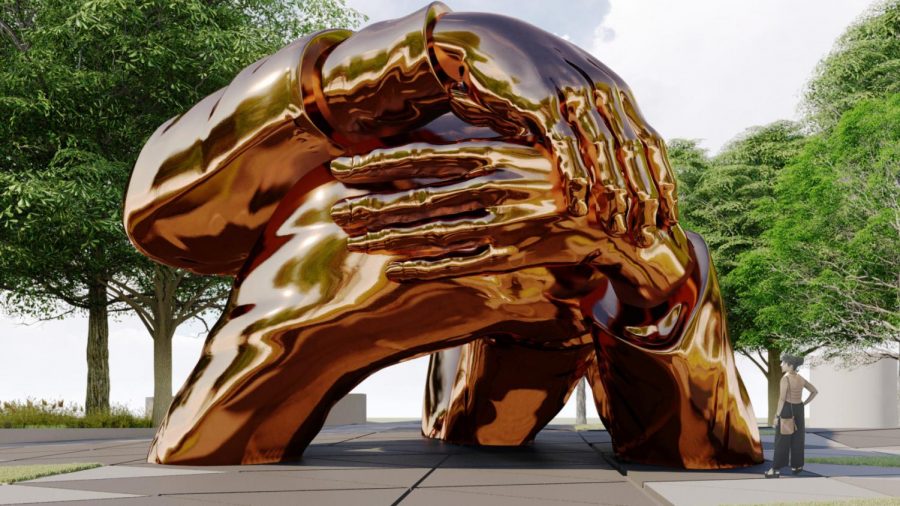 Titled "The Embrace," the future Boston Common memorial is designed by Hank Willis Thomas and the MASS Design Group.

In 1965, Martin Luther King Jr. rallied supporters in Boston Common and called on Bostonians to live by their highest ideals, expressing hope that his legacy would serve as a call to action in the pursuit of justice.

Today, the nonprofit organization King Boston hopes to anchor a memorial in the same location. The project is currently undergoing the city’s permitting process, and the unveiling of the memorial is planned for a later date in 2020.

According to King Boston advisor, Ed Gaskin, the memorial will hopefully serve to reshape the way that Bostonians engage with their community, and help those who are marginalized because unfortunately, a legacy of racism still endures in Boston.

“When people think of Boston, they might think of ‘The Soiling of the Old Glory’ picture. Maybe we can replace that image with the image of the memorial,” said Ed Gaskin, a King Boston advisor. “We can try to replace the old Boston with a new Boston, one that is more embracing, inclusive and tolerant.”

King saw the challenges facing Boston’s communities of color, imposed by segregated schools and high levels of unemployment. This inspired him to rally Bostonians and encourage them to join in the remediation of discrimination in the United States.

A panel of experts, including respected scholars, visual artists and curators rooted in the Black art tradition, selected “The Embrace,” designed by Hank Willis and MASS Design in February 2019.

While King Boston considered other locations for the memorial, such as Franklin Park, Dudley Square, Twelfth Baptist Church, The Freedom House and the Martin Luther King Jr. School, it chose the Common for many reasons — particularly those related to historical significance. The Common is in close proximity to the Massachusetts State House, where Dr. King gave a speech in 1965 to Massachusetts legislators, and the Robert Shaw Gould 54th regiment memorial that honors the contribution of African-American soldiers during the Civil War.

Moreover, the location of the Common in downtown Boston — easily accessible by public transportation — and its status as a famous tourist destination also contributed to the final decision.

Gaskin is currently in the process of reaching out to various Jewish organizations as prospective donors, to honor Rabbi Abraham Heschel’s friendship with King and his role in the Kings’ civil rights work. King Boston has raised about $6 million of their $12 million target as of this month.

Along with the monument, King Boston is also planning to open the King Center for Economic Justice in Roxbury — which would set clear economic mobility goals dedicated to helping those most affected by underemployment in Boston. The unveiling date is currently unknown.

When the King Center opens in Roxbury, there will also be an exhibit about the King Boston film project. To continue to spread the word about their mission, King Boston commissioned multimedia artist and filmmaker Roberto Mighty to create a film project to inform the public on the lives and love of the Kings.

The film is titled “Legacy of Love,” and Mighty ended up involving about 100 people behind the scenes. He also interviewed 18 people to speak on their experiences around the time that the Kings were in Boston in the 1950s. Mighty plans to have interactive displays, by means of touchscreens and other technological devices, to help the public learn even more about the Kings’ history.

“I really wanted to highlight Coretta [Scott King]’s role in their relationship and in their activism,” Mighty said. “She was a committed social activist ever before meeting MLK, which I’m sure a lot of people don’t know. I certainly didn’t.”

The Kings met in Boston in the 1950s while Martin Luther King Jr. was a doctoral candidate in Boston University’s School of Theology and Coretta Scott was a fellow at the New England Conservatory of Music. The years the Kings spent here were formative for their personal lives as well as their civil rights activism.

In April 1965, MLK led a march from Carter Playground in Roxbury that passed through Boston and ended at the Common. On the Common, Dr. King gave a speech raising his concerns and encouraging Bostonians to fight against the struggles posed by slum housing, municipal code enforcement, while encouraging continued engagement with anti-poverty programs and education.

In Boston, Salem, and Nantucket, public schools were racially segregated into the 1840s and 1850s. Though they finally became integrated in 1855, these communities continued to struggle with racial discrimination in educational setting. “The Kings provided the message and legacy that will guide future leaders, it feeds us, and we can live on it,” said Jeanelle Angus, a recipient of the Northeastern University Dr. Martin Luther King, Jr. Graduate Fellowship in her final year of her Master’s degree in public policy and urban affairs.