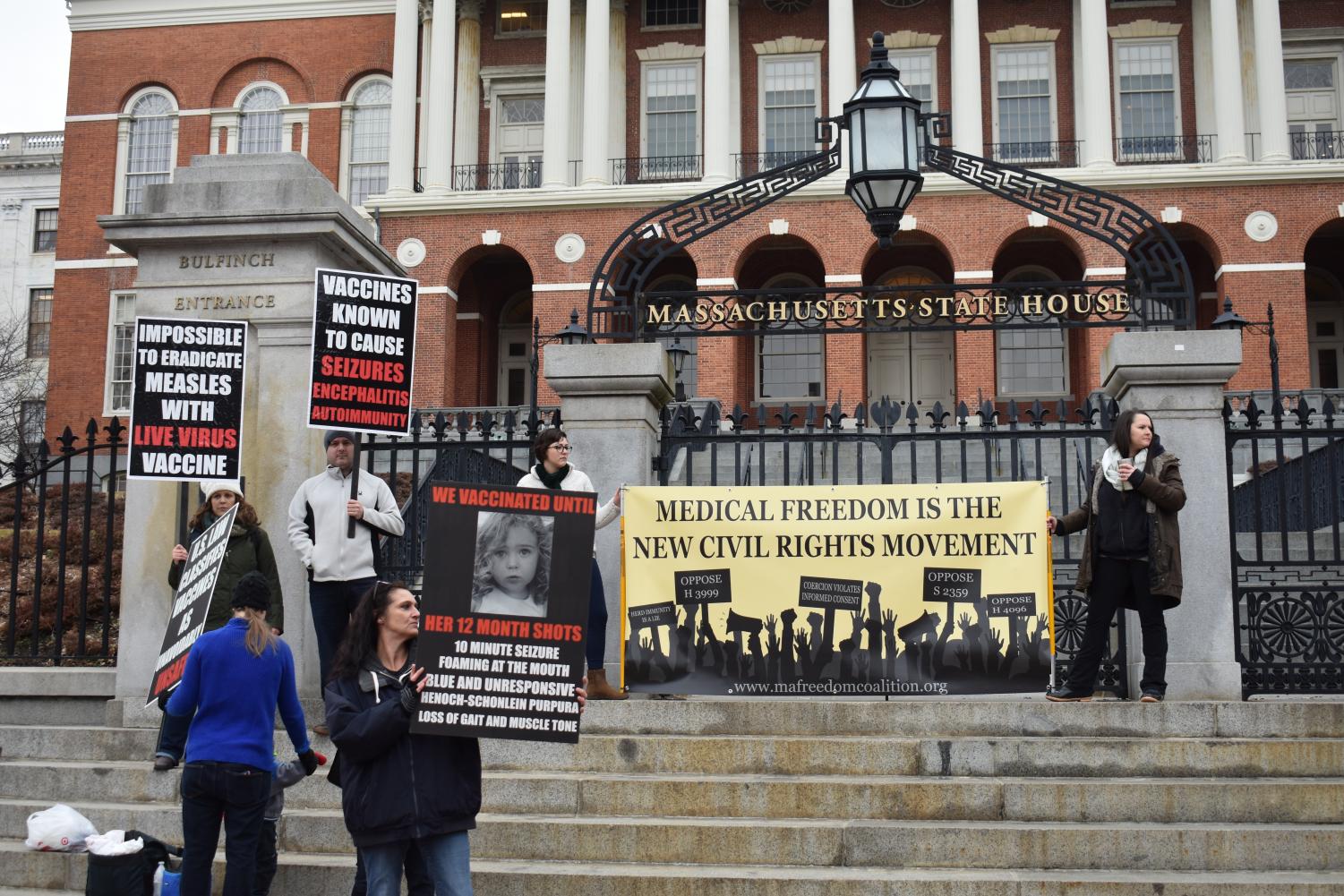 The major catalyst for the anti-vax movement was an article by the British Medical Journal from the late 1990s that was later proven false and retracted. (Kelly Chan)

The major catalyst for the anti-vax movement was an article by the British Medical Journal from the late 1990s that was later proven false and retracted.

A crowd of anti-vaxxers stood beneath a banner reading “Medical Freedom is the New Civil Rights Movement” on the State House steps this past Monday, clutching signs and megaphones in protest of three proposed bills that would standardize vaccinations for all children.

Bills S2359, H3999 and H4096 all aim to enforce immunization practices, but not all Bostonians are in favor of the proposed legislation. They have specifically received backlash from the anti-vaccination community. Participants feel that the proposed legislation could impose on their medical and religious freedoms — as well as rights over their own and their children’s bodies.

“I’m not letting anybody do anything without my consent,” said Melissa Mofford, who attended the event with her own children and her parents Skipper and Barbara.

In addition to preventing these bills from passing, the protesters’ objectives include increasing awareness about their views. Many protesters came to distrust vaccines over time, concluding through their own research that vaccines have the potential to do more harm than good.

“We’re just trying to educate the public and the lawmakers because there is misleading information coming from the medical industry and pharmaceutical companies,” Skipper Mofford said, after doing years of research. “… They’re telling us, ‘It’s okay, it’s okay, it’s okay,’ thinking if they say it enough times that we’ll believe them. I [even] believed my doctor when I took my kids — I vaccinated them.”

However, this view has been widely rejected by health experts. There is now a large range of studies that show the effectiveness of vaccines, said Neil Maniar, a Northeastern professor of public health practice. One catalyst of the anti-vaccination movement, he said, was an article by the British Medical Journal in the late 1990s that found correlations between the MMR vaccine and autism — a study that was proven false and retracted.

Dr. Donald Goldmann, Harvard professor of immunology and infectious diseases, similarly reflected on another study in England that concluded that the whooping cough vaccine can lead to severe neurological issues, which was also reexamined and proven to be greatly miscalculated, showing no true harm effect at all.

“There are no studies that show that vaccines do more harm than good, at least not the [vaccines] that are officially approved in the United States by the FDA,” Goldmann said. “There are no credible scientific papers that demonstrate that, and there are a lot of fake [science] and pseudoscience out there … Bad science can really lead to public harm.”

Maniar believes that the public needs to be made aware of the truths behind vaccines in order to battle flawed studies.

“For folks to really understand what vaccinations do, how they work — I think that’s one of the big things around education,” he said. “ … Rather than saying, ‘You’re wrong, and your view is totally ridiculous,’ say, ‘These are the facts. This is why we get vaccinated.’”

Additionally, Goldmann presents the possibility that the way the scientific information is being communicated to the public is not effective.

“In general, people in public health and scientists aren’t the world’s best at translating the data into something people can understand clearly,” he said. “We’re just not as expert as we need to be.”

However, some people join the anti-vax community due to their own negative experiences with vaccines.

“I started questioning it when my son reacted harshly to vaccines,” said Carol Langley, a former vaxxer who identifies as “pro-common sense,” as she recalled her son’s four vaccine-related injuries. “… We were told it was unrelated, and it had nothing to do with it. We questioned it just because of the timing, but we continued to vaccinate them just to keep them safe.”

After filing her son’s injury, she discovered that there was a connection between her son’s reactions and the vaccines he had received, causing her to lose trust in immunization practices and the science behind them.

“You have to be realistic,” she said. 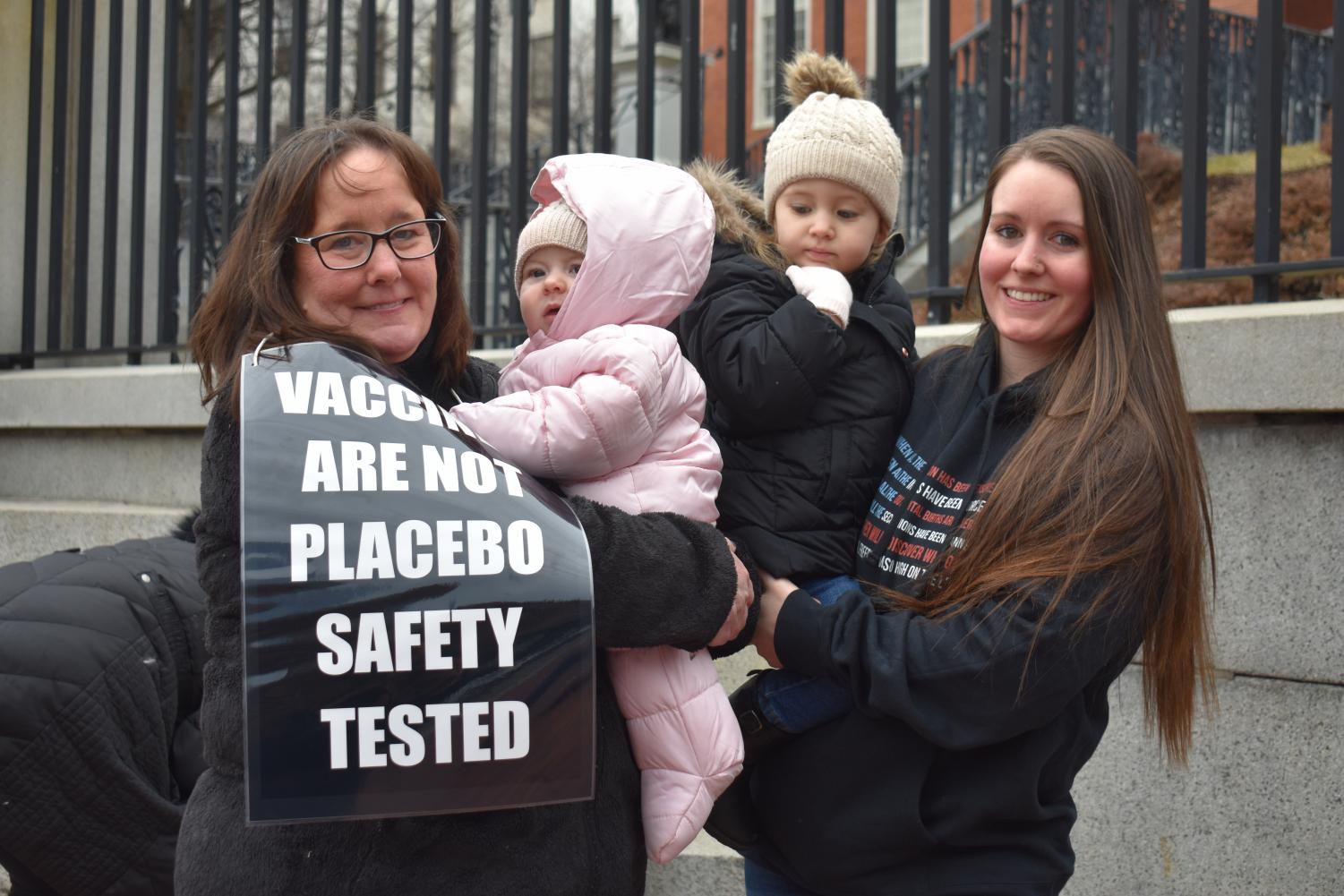 Kelly Chan
Protesters were split between using arguments of safety and religious freedom.

Other protesters believe that bills like H3999 are in violation of their freedom of religion, a constitutional right. The bill will enforce that parents get their children vaccinated in order to enroll them in public schools, summer camps and other programs. To some, especially those of faith, this is a form of discrimination, and there are those who draw comparisons to other moments in political history.

“Something like that also seems like it is going back to the days of segregation. If you are different, you cannot be here,” said Amanda Thompson, a protester from Orange, Massachusetts, and mother of three. “In today’s day and age, everything is about inclusion, and so why start choosing religious reasons to force people out of school?”

Even if vaccines themselves are not the issue, some in the anti-vax community simply do not agree with how they are used and advertised today.

“I actually think there is a place for vaccines in our society,” Langley said. “I just don’t think we are doing it right.”

Regardless of whether they disagree with those in opposition, some public health experts believe in acknowledging all viewpoints in order to benefit the greater good.

“I always like to be respectful to people’s take on the evidence and hear them out because they may have something to contribute,” Goldman said, “and I want to be seen as someone who is willing to listen.”