At long last, a Beanpot victory for the seniors 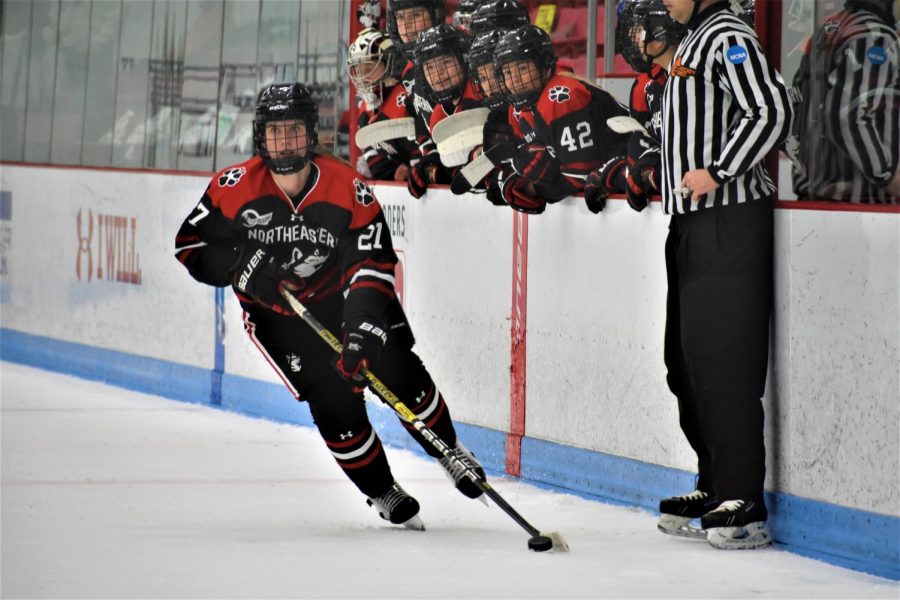 Megan Carter skates with the puck as her bench looks on.

Northeastern’s name has finally been engraved on the Women’s Beanpot trophy for the first time since their last tournament victory in 2013. Only four players on the team — seniors Andrea Renner, Codie Cross, Paige Capistran and Matti Hartman — had ever played in a Beanpot championship prior to this year, and the women poured their hearts out onto the rink.

For the whole championship game, Boston University and NU were neck-and-neck, running into double overtime. With about four minutes left in the extra period, junior defender Lauren MacInnis was able to find an opening just long enough to put the puck into the back of the net.

“It was absolutely crazy,” said freshman blueliner Megan Carter. “The fact that it went into overtime … It was just exactly how it was supposed to play out. You couldn’t have written it any better.”

All the players immediately rushed onto the ice, scattered their equipment across the rink and dove into a dogpile. The traveling DogHouse fans erupted in cheer. They were the largest crowd NU has had in attendance all year.

Throughout their season, the team’s mentality has been to tackle the small goals, day by day, to keep themselves focused. For the Beanpot tournament, like the rest of their season so far, it proved successful.

“In the past couple of years, we’ve obviously come short in the Beanpot, and I think that’s fueling a lot of our motivation this year,” said senior assistant captain Matti Hartman, before the first game. “But we’ve just been taking it one game at a time, not trying to look too far ahead.”

One of the biggest team mantras for the women is not to get “too high or too low” during a game or their season as a whole. Their ability to control their emotions and stay headstrong has enabled them to be resilient and establish themselves as some of the toughest contenders in the nation. Currently, the team is ranked third in the country with a 25-3-1 record.

“I think [the idea of] playing for each other kept us in check,” Carter said. “Just even a little tap on the back or something from a teammate, whether it was a good or bad shift, just to keep us going and move onto the next shift was a big thing.”

Even before the first Beanpot game, the women — even the freshmen — went into it treating it like every other game.

“As much as it is exciting, it is another hockey game, no matter the stage,” Carter said. “I like to just think of it as the same 200-foot surface and the same team.”

The team also attributes their success thus far to the special bond they have created this season. The players constantly support one another, and their team-oriented mindsets truly keep them strong.

“Everybody trusts each other, and we all lean on each other and hold each other accountable,” Hartman said. “I think that’s something that we really wanted to ingrain in everybody from the start of the year, and I think that really translates onto the ice.”

For the final game, their encouragement for one another was more than evident, with every player on the side yelling with excitement and high energy.

“I think that the bench energy had so much to do with our energy on the ice,” said freshman forward Katy Knoll. “I think we kept it high for the majority of the game, and I think it really helped us come out in the end.”

Above all, this victory was dedicated to the seniors. Since their freshman year, they have been waiting for this moment of redemption. With their Beanpot careers ending on one final shot late in the double overtime period, it took until their absolute last opportunity to take home the trophy.

“There is no better way to end your Beanpot experience,” said captain Capistran. “Getting it your senior year is what you dream about.”