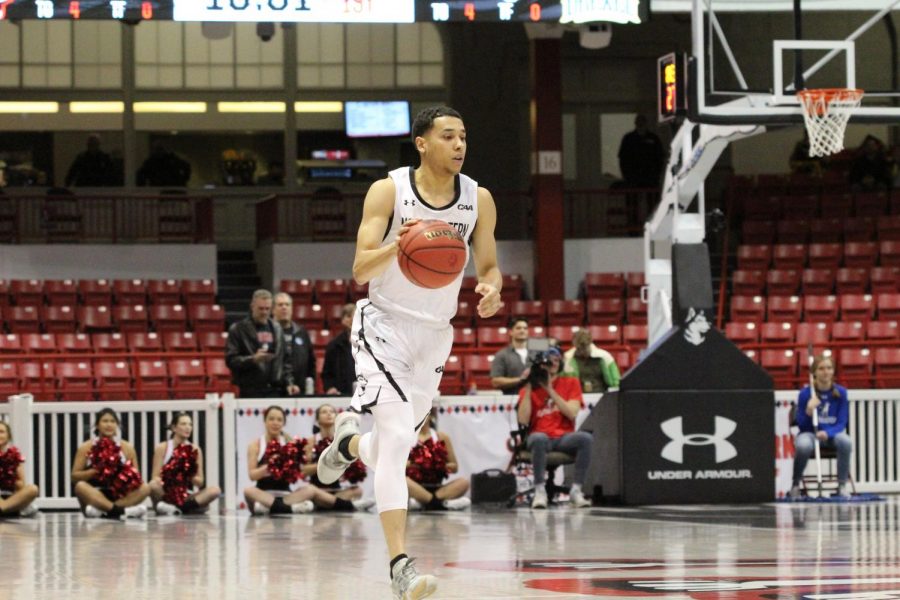 Redshirt senior Jordan Roland was the highest scorer in tonight's game, with 27 points.

The men’s basketball team broke their four-game losing streak tonight with a 71-63 win against UNCW, who they lost to last month.

“Is it a milestone?” Coen joked. “It’s been many years since I’ve scored a basket or grabbed a rebound, so whatever we achieve here is about the students.”

Recently, Boursiquot has been playing a larger role in games in regards to shooting and defending.

“Defense is something I try to bring to every game, I think that’s my best attribute,” Boursiquot said. “I try to get deflections and steals and try to set the tone for the other guys.”

The Huskies (12-13, 6-7 CAA) dominated the first half, never giving up control and eventually reaching a 14 point lead. The Seahawks (8-19, 3-11 CAA) received two traveling violations in the first four minutes of the game and were unable to make any baskets for the first seven minutes of the contest. Eventually, UNCW sophomore guard Jaylen Sims made a jumper and finally got his team on the board.

Just after they scored, Roland stole the ball from a Seahawk mid-bounce, and rushed it forward for a layup. In the span of 30 seconds, Boursiquot made a layup, blocked a dunk attempt, fouled and went for a free throw.

The second half was full of fouls on both sides, which slowed the half down significantly in contrast to a quick first half. In this half, the Huskies reached an 18-point lead and showed impressive defense of their home court.

“He’s extremely energetic,” Coen said of Burke. “Since the coaching change, they play with a lot of energy.”

Despite the win at home, it is not lost on the team that they still have to put a tremendous amount of work in for the final five games to fight for a playoff position.

“They don’t want to be the team that lets the tradition down,” Coen said. “We still have growth left in us. I’m proud of the guys for coming to practice every day because it’s not easy. Losing jades everyone.”

The Huskies (12-13, 6-7 CAA) have a quick turnaround with a home game this Saturday at noon against College of Charleston (15-11, 9-5 CAA), who they defeated in January on the Cougars’s home court.