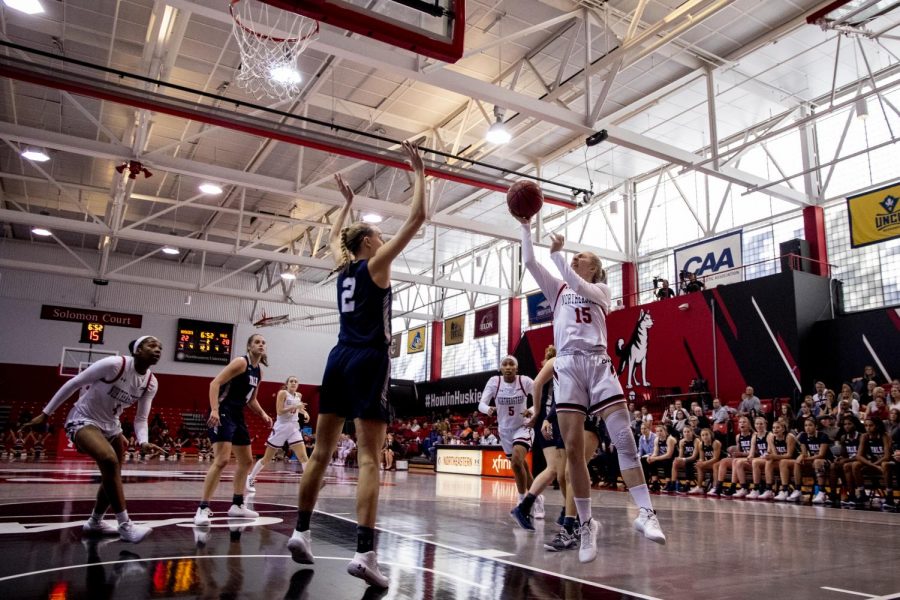 Freshman guard Anna Boruta goes for a jumper in a game against Yale.

With the energy of the home fans cheering, the Northeastern women’s basketball team beat the Towson Tigers, 66-63. After honoring their three seniors: guard Shannon Todd, forward Courtney Redcross, and forward Rachel Aho, the Huskies came out of the locker room with a perfect start to the ball game.

An almost out-of-bounds ball was saved by senior guard Todd who kept it in for sophomore forward Alexis Hill, who then completed an under the basket pass to sophomore guard Katie May for the first bucket of the game. Todd then hit a triple, making it 7-0. May followed with her own triple, giving the Huskies (12-14, 8-7 CAA) a 13-0 run to open the quarter.

“The ball was just going into the basket for me today, it just happened to be my night, but it could have been anyone’s and looking at the score, it was everyone’s,” said May about her game-high 15 points.

Towson (13-12, 8-6 CAA) finally secured a bucket with 3:30 left in the opening frame, making it 13-3. The Huskies could only get an additional three points while the Tigers went on their own run with the quarter ending in NU’s favor, 16-10.

The second quarter, on the other hand, wasn’t nearly as perfect for NU with four lead changes. With two triples by the Tigers, followed by a stolen ball converted to a layup, the Tigers took their first lead of the game. May then followed with a triple, regaining the lead making it 21-19. This was short-lived as Towson freshman guard Maggie Sharp countered with her own triple, 21-22.

After three minutes of no scoring for the Huskies, sophomore guard Kendall Currence knocked down a triple to get the NU lead back, 24-23.

“We just have to be more consistent and have fun with it like we did today because when we put our mind to it, this is what we can do,” said Currence.

A massive block by Hill led to her own bucket in the Husky paint. Although the Huskies were outscored in the quarter 19-18, the score was still in NU’s favor, 34-29.

It seemed to be a game of threes as both teams were neck and neck with treys, with the Huskies going 6-17 and the Tigers going 5-16 for the first half.

Junior guard Stella Clark hit the opening basket of the second half for the Huskies, 37-31. Senior forward Ayanna Dublin was the only Husky to fall in foul trouble with three early personal fouls to her name. Currence hit the trey to end the quarter, 51-46.

The Huskies were off to a not-so-great start for the fourth quarter as the Tigers scored two back-to-back buckets putting them within one, 51-50. With the Tigers having nearly caught up, they fouled Clark, sending her to the charity stripe where she made both baskets, putting the Huskies up 62-59 with just 30 seconds left in the game.

The Huskies then secured the game in front of friends and family, winning 66-63.

Looking ahead in the season, the Huskies need to win their next three games, or go 2-1 and win two CAA tournament victories, to qualify for the at-large national postseason bids.

“We have three more obstacles in our way, it’s getting closer to tournament time and everything we are doing right now is one step at a time trying to put ourselves in the best position when the tournament comes around,” said NU coach Kelly Cole.