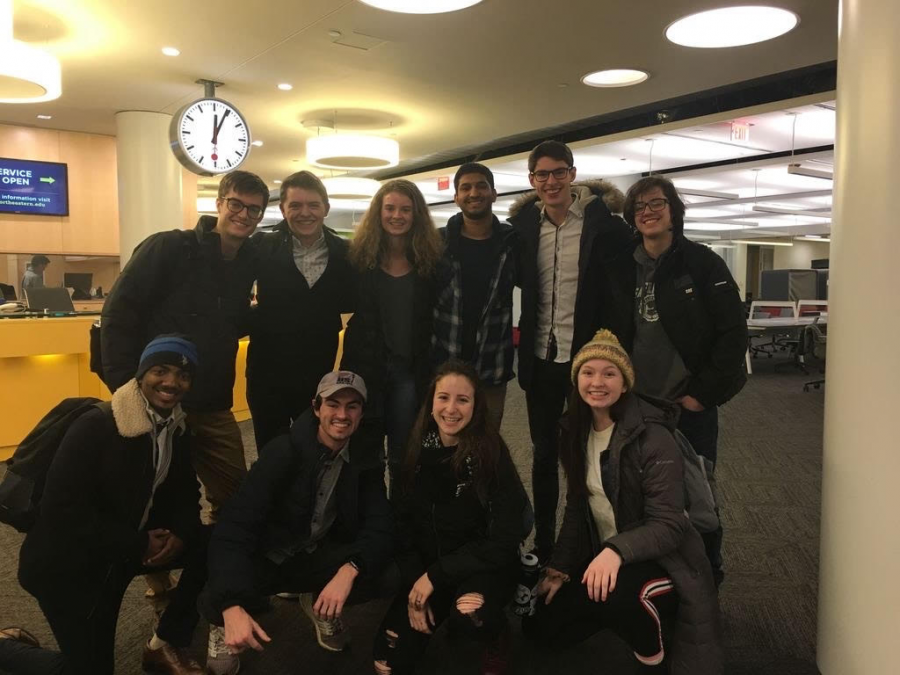 The Northeastern research team, made up of primarily first- and second-year undergraduate students, was awarded $90,889 to develop technology to explore the permanently shadowed regions (PSRs) of the moon.

Northeastern University, along with eight other universities, is an awardee of NASA’s annual Breakthrough, Innovative and Game-Changing (BIG) Idea Challenge.  The Northeastern research team, made up of primarily first- and second-year undergraduate students, was awarded $90,889 to develop technology to explore the permanently shadowed regions (PSRs) of the moon.

PSRs are craters on the moon which, due to the moon’s position relative to the sun, do not receive sunlight. Some craters have not received light for more than 2 billion years.

“Not even NASA knows what’s happening in the PSRs,” said María Belén Ou, the mobility team lead and a second-year mechanical engineering major. “Like when we had this whole Q&A session [with NASA] … when the competition first started and we’d ask a couple questions about what the PSRs looked like and what’s going on down there they basically told us ‘we have no idea, that’s your job to figure out … that’s the point of the competition.’”

But, the team saw the lack of knowledge regarding PSRs as an opportunity to be creative and NASA found their proposal innovative.

The design has two parts, the Surveying Craft for Observing Unexplored Terrain, or SCOUT, and the Deployable Out-of-crater Generator for Holding and Utilizing Solar Energy, or DOGHOUSE. SCOUT is a four-legged rover intended to collect data in the PSRs and DOGHOUSE serves as a charging station for SCOUT and as a communications relay system.

SCOUT is “basically a dog,” said Professor Alireza Ramezani, one of the project’s faculty advisors along with Professor Taskin Padir, because the rover has four legs. The legs separate this design from other space rovers as most have wheels.

“We had a feedback call where [NASA] specifically called out IR [communication], LiDAR [scanning], and wireless charging as the especially interesting novel parts of our design that motivated them to fund our project,” said Andris Zonies, the team lead and a second-year computer science and physics major.

NASA announced the eight universities receiving a combined $1 million Feb. 14, but the team wasn’t certain they had won until several hours later.

“It was a very unusual experience,” said Paige Butler, the testing lead and a second-year mechanical engineering major. “[B]ecause we found out before NASA sent us the email.”

The research team received texts in group chats and congratulations from friends about a NASA article that said they won the award. They refused to believe they got the funding until they received the official email later that day.

“So we at first didn’t know if it was actually true or not,” Ou said. “But like we saw our university on [the list of schools].”

The team didn’t always believe they could win this award.

“There was definitely a point where I thought it would fizzle out,” said Julian Morgen, the electrical team co-lead for navigation and communications and a first-year industrial engineering major.

“All the time, it felt so overwhelming,” Kolli said. “It was definitely a team effort but when you’re the only person on that subteam, it’s really, really hard and I did feel like giving up.”

The team relied on each other as they worried about how many members they had, balancing this work with their classwork and competing against teams of graduate students who may have had more experience, resources and technical knowledge.

“Our team was a very good support system. We had each other’s backs and if anyone needed help we were always there to support each other,” Ou said.

The team formed through Northeastern Students for the Exploration and Development of Space (SEDS) and later reached out to Professor Ramezani, who specializes in robotics, and Professor Padir to be faculty advisors.

“None of us entered with any knowledge,” Zonies said.

“Because we all entered with about the same experience and we all work together,” Morgen said. “People were able to jump around and help [with] other things.”

The team members joined because of their passion for the project and for space. Through SEDS and the BIG Idea Challenge, they got this opportunity for learning and research. Since the team won this funding, they now move into the process of building SCOUT and DOGHOUSE.

“We like to say that the problems that we’re solving are things that no one has ever done before,” Butler said. “So any idea that we come up with is equally as valid as anyone else’s … no one else has put a robot on the lunar PSRs, why can’t we?”